The Friday Fix: Dropping chains and ridin' in rain

Trying to get an accurate account on the weather for Thursday on Wednesday night was mind boggling.  Some said snow, some were saying rain, others were saying rain in the evening.  So when I woke up early Thursday morning and it looked dry out, I decided to go for it.  Knowing that there was a pretty good chance of rain went looking for a pair of rain pants and found some that I usually take on fishing trips.  Once I got outside, locked the door behind me, and was all set to go is when I noticed it was raining.  FOCK ME!  Just a sprinkle, really, but I still then needed, to pull out my keys, unlock the door, go back in the house and get a waterproof sleeve for the laptop just in case. 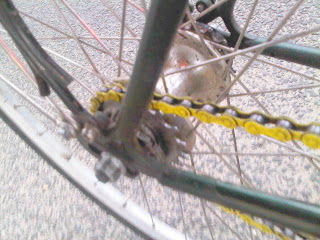 Then I was off, second ride on the new gearing (44:17) and things were going nicely till I dropped the chain on the dirt road.  I thought I had this problem fixed.  Looking at the cranks and spinning them there is a wobble in them which leads me to think that BB spindle is bent.  I suppose it's possible, afterall I have over 600 miles on this bike as a fixed gear.  Back on the paved portion of Pond Brook, my lock ring came off next!  Never had that happen before but since I was riding with the new set up I brought my lock ring wrench and was able to tighten it down without even having to take the wheel off.  Then nearing the office, I dropped the chain again! 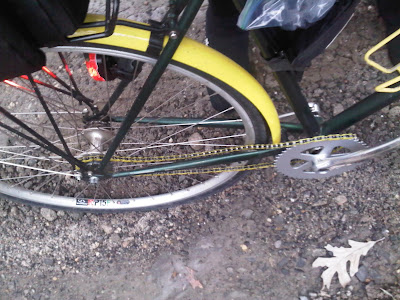 When I left the office at 5 PM it was actually raining.  I had rain pants in my trunk pack but it wasn't raining that hard so I just opted just for the rain jacket.  It was a cold rain and I am glad I layered up including my headband and over booties.  This was the first time I would be starting the ride home with a steady rain so I took it slow, also because I wanted to minimize the chance of another dropped chain. 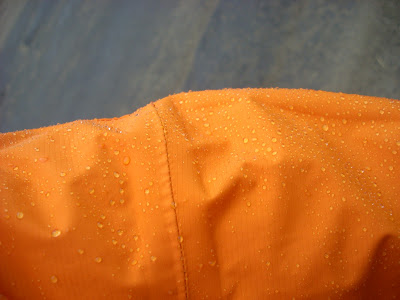 I bought this rain jacket awhile ago but not a big fan of it because it doesn't have rear pocket and no zip pits.  It gets pretty hot with it on and no ventilation means a sweat bath.  I have ridden it a few times while mountain biking and post ride I am so wet with sweat that I wonder if it would have made sense just not to wear the jacket, that's how hot it was.  Well, it proved it's worth on Thursday because it was raining at a pretty good clip.  In fact, it was a cold rain, so between the rain jacket and the three layers I had on underneath I was pretty comfortable for the ride home. 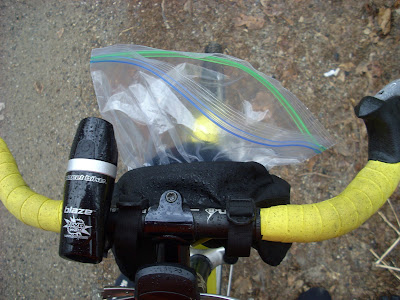 That was the other thing I had to get in the morning before I left, a few zip lock bags for my two packs to keep my wallet and things dry while it rained.  My Timbuk2 bag was a problem though.  On the way in I was wearing my dayglo green riding jacket, which has some rain shedding capability but I am sure you know this riding jackets as they are really smooth.  The bag kept slipping out of position.  On the way home, I experimented with various positions but finally found that it would stay in one place if it was all the way over on my left.  I really hate this bag but it's so hip to ride with it that I can't decide whether to ditch it and go with a backpack or not.  Not to mention, it's a great computer bag.
Also of noteworthy mention, while I was riding the Upper Saddle River Trail in NJ last month I tweeted that I was riding fixed and got a mention from two fixie bots!  One even retweeted it's own tweet.  That was kind of cool.  So now, with every ride, I try to tweet something that will get a mention from the fixie bots.  I got a mention when I was tweeted with a guy about his new singlespeed and wanting to know if he was planning riding it fixed.

So, to try to solicit a mention from the Fixie Bots, I decided to try to tweet something every time I ride fixed, I would never tweet something that isn't true - what do they say about the difference between Facebook and Twitter?  On Facebook, you lie to your friends and on Twitter you tell complete strangers the truth about everything?  So, to try and get a mention I thought I would come up with some sort catchy handle.  First I tried calling myself the The Lone Fixed Gear Commuter, because the way I see it, I am probably the only person in The Housatonic Valley Council of Elected Officials Region crazy enough to ride a fixed gear and use it to commute to work!  It did get a mention but I felt that it was just too cheesy.

Not that I am likening myself to the Honey Badger, although I am pretty Badass myself, I like how the sassy narrator describes the animal always in the third person, so I thought I would try that line myself and just describing myself as the Fixed Gear Commuter and lo and behold, I got two more mentions!  Question is, are these fixie bots automatic, scouring through millions, upon millions of tweets looking for "fixed gear" or combinations there of?  I wonder if there is a hipster bot that looks for mentions of PBR, cheap sunglasses, and Starbucks?