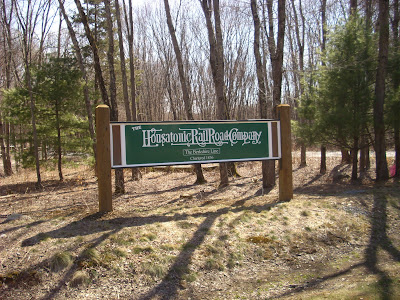 Day 9 of 30 Days of Biking challenge I took the boys on the Monroe Rail Trail, which appears to have some new signage identifying it as the The Housatonic Rail Road Company, Berkshire Division.  This sign is at the main Pepper Street parking area.  We always park at the first Pepper Street crossing where you can park on the side of the road but it's not very official and there have been break ins in the past here, too. 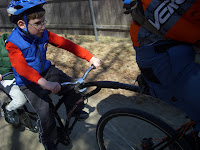 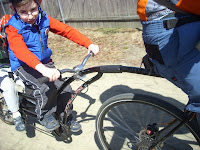 There was some initial squabbling over who get's to be the captain on tandem trail-a-bike.  Since Brodie got to go first last time when we are on the North County, Elliot had to be the Captain for this ride.  Elliot may dislike riding by himself but he loves the trail-a-bike. 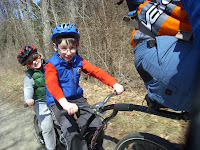 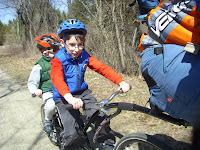 Of course, Brodie loves it, too, and but doesn't really care where he sits, as long as he gets to ham it up where ever and when ever possible. 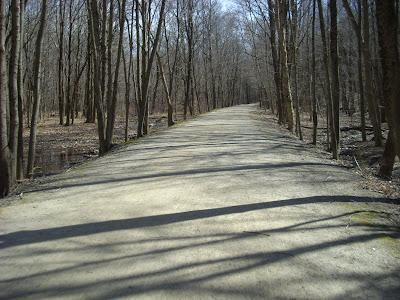 60 degrees on Saturday though the northerly wind kept it a bit chilly.  I always park higher up so I get more of ride because for the boys, it's all about the park.  They like riding but they love the park.  From the first Pepper Street crossing to the park it's 2 miles but if I work in the drive way down to the gate shack and on the tail end of the ride up to the Newtown Trailway turn around, all told I can get about 9 miles in total.  That wouldn't be much if I were riding alone but pulling 100 lbs of kids and 40 lbs of trail-a-bike turn this little jaunt into a pretty good workout. 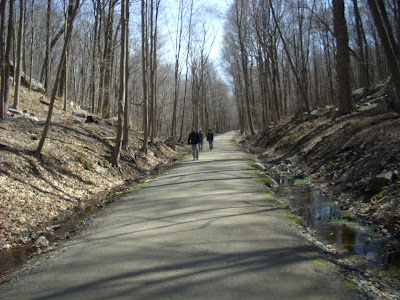 Of course, for the boys, the high light of the ride is the park.  Monroe Parks took out a section of the Jungle Gym and replaced it with a larger structure with more things to climb on and climb over.  It's funny how the boys relate to the different rail trails that we ride, at Monroe it's the Orange Park because of the orange jungle gym.  Middlebury, it's the seesaws that they have at Meadow Brook Park.  The Baby jungle gym at Brooksvale Park on the Cheshire Trail, and the really big park on the North County.  We still need to check out the really, really big park in Avon off the Farmington Rail Trail sometime. 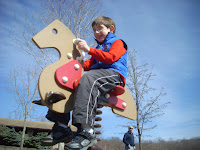 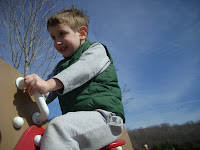 There was another group at the park, at first I thought a mother and two daughters but when the little girls were calling the woman by her first name I figured it must be an Aunt.  Still, I was impressed that they were all wearing helmets on their ride to the park. 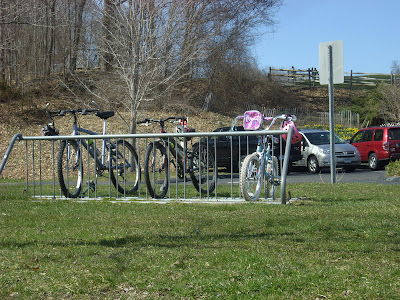 And while I didn't get a picture of this guy I now understand the meaning of a Fred.  This guy rolls into the park on  yellow Special-Ed road bike with a lot of bling bling parts, a real PT Barnum consumer, only dressed for a night at the discotheque.  I did, however, get another Fred picture, this one of a guy riding at least a $5K full suspension Niner branded mountain bike. 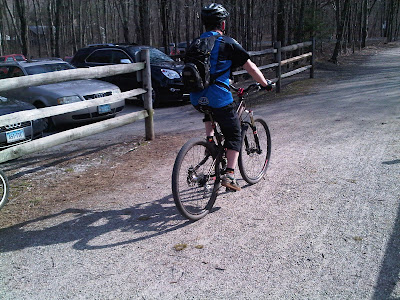 In fact following this guy was a whole crew of mountain bikers that I think were from one of the local Meet-up groups.  Not sure where they were riding or if they were poaching some blue trail farther north but it looked like after they all passed that they were riding the various patches of single track coming off the rail trail.  I guess what ever floats your boat.  Personally, with that kind of hardware (and time) I would be hitting the Pequonnock River Valley. 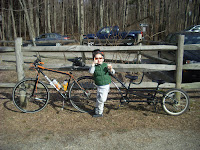 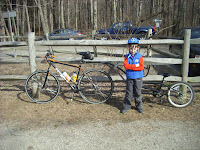 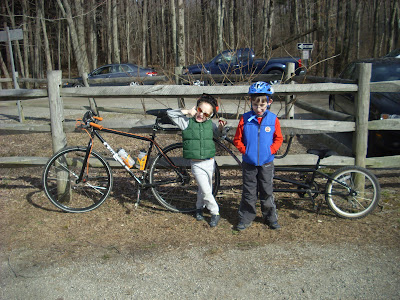 We still had some time to kill because afterwards we were heading out to dinner at the local Duchess and then to Brodie's first baseball practice.  So we headed further up the trail, past where we parked the car to the Newtown section of the trail.  Looks like Monroe fixed the drainage problem that I noticed last year when Katie and rode up here last spring.  The flood we had last month must have prompted the work.  Further up the trail, however, into the Newtown section we found a tree blocking the trail and couldn't proceed any further. 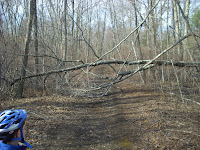 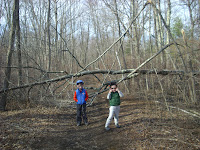