I think this is my best route when I have the time.  The top part is pretty flat and 10 miles to work, which is the route to take in the mornings, which bottom part is 14 miles, relatively flat as well and can do it pretty much in the same amount of time with the geared bike.  In fact, my time on the ride in was 1 hour 7 minutes for 10 miles and 1 hour 8 minutes for the ride home.  Of course, I would have quicker times if I didn't stop to tweet. 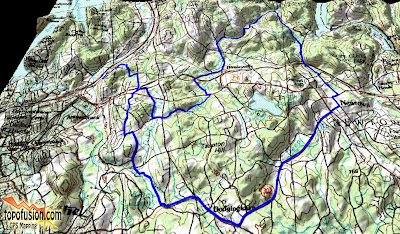 Day 11 of the 30 Days of Biking challenge, still riding the Commuter Cross both out of love for the bike and haven't gotten to replacing the BB on the Stinson.  What about the Lambert you might ask?  With those really skinny tires and new BB I was to test it out locally before I try riding to work.  I heard that we were to have a very warm spring day so I checked the weather at 5:30 Monday morning and it said it was supposed to be nice, however, when I got out it was foggy and misty, and really humid. 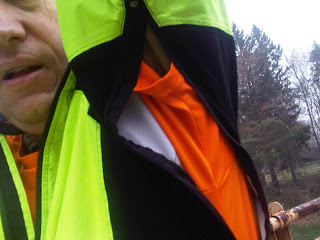 I tried to dress conservatively so I wouldn't overheat but still stay dry but by the time I hit the first bridge over Rt 84 I had to open the zip pits.  The Timbuk2, however, was behaving amazingly well.  I think that is because I have a better way of carrying it so that it stays put and that is to hold basically all the way on the left side of my back so that it's almost falling off but held in place with the strap.  At least I think that helps but the true test will be when I am riding fixed again. 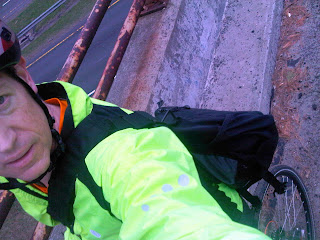 I keep noticing this BMX bike (below) sitting at the side of this apartment every time I passed by here and I amazed that it has lasted this long without being stolen.  Not locked up and next to a busy thoroughfare.  Could the flat tire be preventing it's theft?  Pretty brazen of the owner to just leave it there. 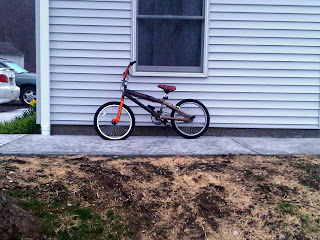 Bike only needed two trays because it wasn't dripping wet.  Tires were wet and I didn't want to have it on the carpet.  Not sure how much longer I will have an office to park the bike in because it sounds like we will be moving to more of an open office seating arrangement in the near future so people can be more collaborative. It makes sense from an IT persecutive and that's only if you have a bunch of IT teams working together but where I am located that is not the case.  Our IT team supports an operations group located in Danbury, and even that is kind of limited.  What I hope this doesn't mean is that we will be moving locations. 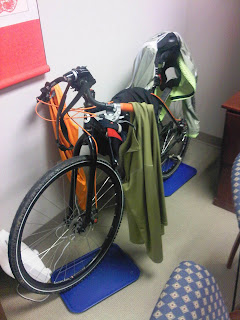 On the way in, I was dressed for cooler weather but the ride home, it was shorts and a T-Shirt because it was so warm.  After taking this picture a roadie passed me and asked if I was OK.  I tried to catch him and almost caught up to him but he blew me away on the next climb. 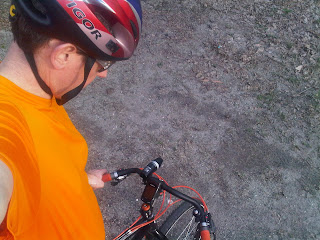 Even though the sun was mostly hidden behind the clouds it was really nice riding home.  There was a slight tail wind from the west that made me feel like I was flying at times.  While the Timbuk2 was staying in place the strap buckle was digging into my shoulder.  I tried to adjust the padding but not really sure it helped much.
at 6:30 AM