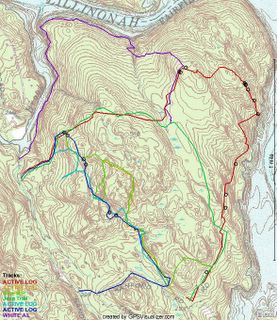 Found a new trail or atleast a new and improved trail. With all the hoof prints and horse shit on this trail, I would say there equestrian community have decided that the west side of the forest needs a new trail. Its not bad. On the map, its the dark blue trail towards the left of the picture.

Today was the first time riding since I stripped my crank. Class Cycles in Soutbury did a superb job putting new cranks on, fixing my rear axle, and tightening up everything else on my bike that needed it. Basically, they told me that I am riding the bike too hard. Guess, I am going to have to buy a full suspension bike.

So, I decided to ride the west side of the forest. I blasted through the stream bed that I usually go around but since it was dry and the fact that there is tree down blocking trail it looked like this would be easier. Also to note this was my first ride with toe clips and new shoes. I don't think I am ready for clipless and besides I will do that with the new bike, next year.

I noticed that the trail branched off from the blue blaze so I started following it. It detours at one point, goes west and there appears to be other trails, just not marked, so I assumed the way I returned was the right way to go. The trail picks up the blue blaze for another 100 yards but then branches off again. I went left and followed this new trail. I had been down this path before, however, I found that there was yet another branch a little further on that I am not sure was there before. That branch basically makes a bee line for jeep road but before that it crosses the blue blaze once again.

I need to ride this trail in reverse next time. I think it will be more enjoyable. Failed misserably on my first log jump using the clips. Stalled out and couldn't get my foot out of the cage quick enough. Ended up with a nice scrape on my right calf. Subsequent logs were better. Need more practise.

Either I am riding this bike too hard or I bought a POS! Picked up new peddles yesterday and changing them out was a snap. I made sure that they were both really tight. Even road around my back yard to test them out and did a few logs.

So I out riding today with my daughter, pulling her on the trailerbike and notice that the right peddle is turning funny. I kept thinking that strap was getting in the way (decided it was time to try clips and straps - work my way up to clipless). Got about 2 miles when I stopped to check what was going on and the peddle just fell out! Well it was fun riding home peddling with my left leg and making my daughter do much of the peddling.

Thinking back now, I recall when we went to Ninham last weekend that something on the right side was making a noise when I pushed down on the peddle on that side but I had no clue what it was - now I think I know. I think the peddle threads were already stripped. 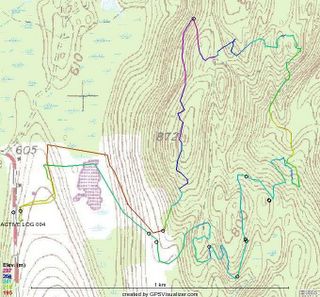 Email ThisBlogThis!Share to TwitterShare to FacebookShare to Pinterest
Labels: Ninham 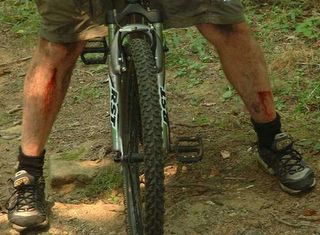 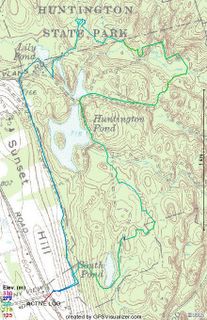 Here is the map of our 8/4 ride with the Nate and Deeman. It was RAW ride, Ride After Work. Also met Hugo03 from Bikerag in the parking lot. First Bikeragger I met in the flesh. The track that is not on dirt roads are single track. 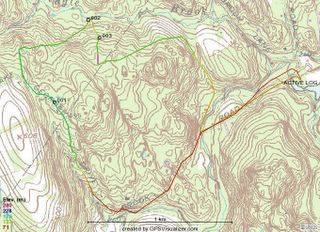 Today's workout in Burr Farm. I haven't seen the bench in a long time so I decided to ride down to it. I also tried it clockwise and it was a much better ride. If you are wondering about the way points: 001 appears to be a better route to take from Lake George to get on the main path (counter clockwise to the bench). 002 is the bench itself. 003 is where there is a ton of Poison Ivy. 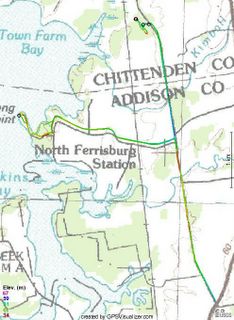 Katie and I rode twice while on vacation in Vermont. On Friday, we rode from Long Point to the end of Greenbush Rd, to where it intersects with Rt 7, about 8 miles round trip. Then on Sunday we road north on Greenbush into the town of Charlotte and then stopped off at a nature preserve to do a geocache. Found the cache!