Trail Blazing with the Q Ball

I rode the new trail, the abbreviated version, today with the Q Ball and did a little more trail blazing of the connector from the blue blaze to the forest road, see my Riding the AC clipless post for a frame of reference. Riding up the track that is the continuation of Echo Valley Road was fun. I was able to ride most of it except for getting over the downed trees. 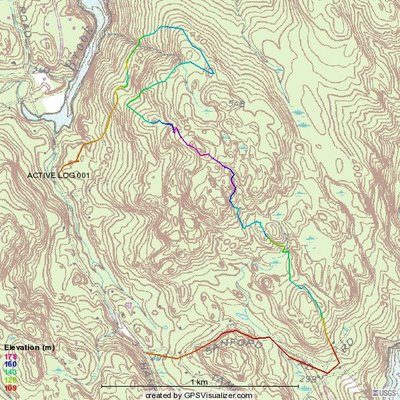 I started going down the branch I identified on my AC ride last week but the track that the loggers made goes too close to a natural swale that in the spring would be considered a wetland. To move a few yards further away runs into a tremendous rock garden. Something I don't think we want to tangle with because it will require moving a lot of rocks! You can't really see it on that map but I actually back tracked and started from the blue blaze a little further down and it makes for a nice ride down and then turn to traverse the steeper slope on the side. So, I think I found it! Woo Hoo!

Once back out on the Polly Brody I decided to ride to the highest point that the road gets to and then come back on the Mulikin Trail and take another shot at finding an easier transition back to the Polly Brody. I have found some great rollers back there will be fun to ride, but you will have to work for it and climb!
at 5:34 PM No comments:

Qball in the Fall Mosaics

Qball in the Fall

Took my daughter to the Monroe Rail Trail today for her first ever ride (without training wheels) and we found a little single track to play around on, too! She loved it. The mosaic above she took and I put them together with photoshop.

Here are more pictures she took! 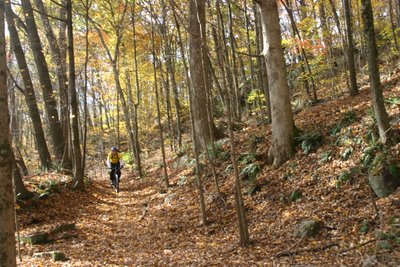 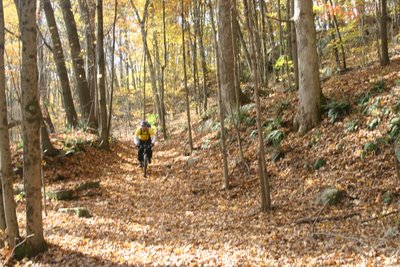 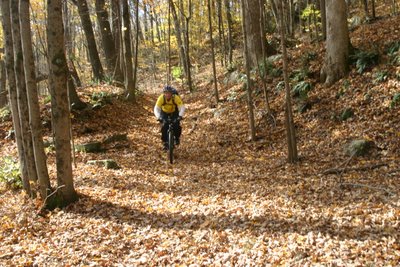 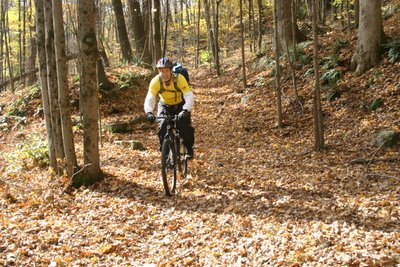 Here is Katie getting her first taste of a little DH action! 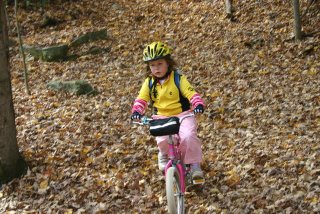 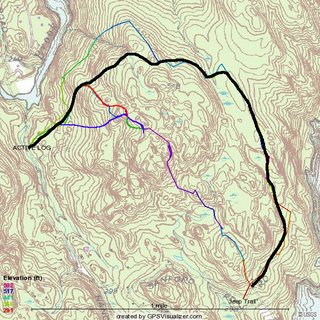 Took the AC out for a workout and what a difference riding geary vs singlespeed. It felt smaller, too, but it sure is plush with 6 inch travel all around. Barely felt a bump! I also noticed an improvement in my ability to climb hills after riding singlespeed because I can climb! I don't need to drop down to the lowest granny gear and crawl up the hill because now I hammer! I did, however, at the start of the ride have a little equipment failure. I have been playing around with seat heights on the AC for riding on different types of trails and the seatpost clamp level snapped on me today. I was still able to close it, though and go for my ride, although the seat was pretty high. Going to have to get me another Salsa Flip Lock.

Rode in Upper Paugussett and took another shot at the new trail, trying to find a better entry from the Polly Brody to the Blue Blaze and I think I found it. Below is a blow up of the above map with some points of reference. The new trail will follow the start where the original equestrian trail comes out, only few yards more to the east and climb to west of that little knoll where it picks up an old logging track (because there is a break in the stone wall), wraps around, dips through a little saddle and then gradually climbs up the back side of the hill where it picks up yet another logging track and connects into the Blue Blaze. 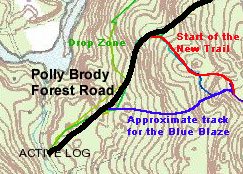 It's funny, DEP wants us to use Blue Blaze, but CFPA does not - go figure. If we can't get CFPA to play nice, then we just bisect the Blue Blaze twice to link up with the rest of the proposed trail. Now that the leaves are almost down its time to mark this trail and get the ball rolling on making it an official trail.
at 4:27 AM No comments: 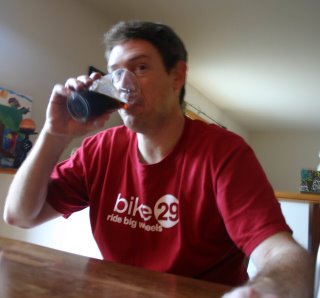 I asked my wife to bring home a twelver of Sierra Nevada Pale Ale from the Grocery Store but she couldn't reach it and she knows I like Sammuel Adams but couldn't decide on which to get; Light, Lager, Boston Lager, etc.., so she got me the Winter Sampler.

I thought, oh great, a twelver of funny tasting beers but to my amazement they are really good. I have never been a fan of fruit flavored beers but the Cranberry Lambic is awesome. It reminds me of hard cider with a ale finish and the taste of Cranberries - something I love.

Friday the 13th on the QBall

Rode the Burr Farm today for the first time in over a year! Actually rode there on Wednesday but got such a lousy GPS track that I am ashamed to post it. Not sure why I stopped riding here but since meeting a new contact from Newtown Bridal Lands Association (NBLA) with whom I am going to work on a new trail in the Upper Paugussett State Forest, told me he has been doing quite a bit of work in this area for horse back riding. So, I figured I should have a look at what he has done. All I can say is WOW! Its a nice subtle mix of single and dual track. Once you get into the main area, the trails tend to be dual track, they look like old ATV trails that didn't get too abused.

I followed the red tape in, which you pick up off Pond Brook and parallels the stream for a bit and then climbs up gradually and eventually you come up to a field. Trail goes through the field and then hits a big intersection where one of the trails crosses over Dinglebrook and goes somewhere I have never explored. The red tape continues off to the west and then turns north and hooks around into that first loop you see on the map above.

The second loop, which almost looks like a bowtie, is the Brookfield Burr Farm Open Space trail. My recommendation is if you are going to ride it, do so clockwise from this map because getting to the bench at Dinglebrook that way has many, many steep descents. So going the other way would mean these descents turn into serious hike-a-bikes. The climb from the bench, is pretty do-able. I think there were only two places where I had to walk due to roots and rocks and not having enough momentum to get through the tech.

That's the thing with 29ers. Its all about the momentum. The slower you go, the harder it is to get through the techy stuff because the tire has to roll farther. When you got the momentum, you roll right through. Now, if I had a suspension fork up front, I think that would be somewhat alleviated because the compression of the shock would allow the wheel to adjust more evenly and quickly to the imaginary plain over the uneven terrain and thus roll even better through the tech. Guess that is one of the drawbacks to riding rigid.

Coming back, I followed the Yellow Tapes back to the field and then picked up the red back to Pond Brook. On my way home I saw a mountain biker working on his bike at the boat ramp so I stopped to talk to him. Turns out he used to work for Cannondale and new some of the people that I knew. Suggested that he join NEMBA but he wasn't interested. Too bad I didn't have any cards on me. Then, Tom from NBLA showed up and we were finally able to meet face to face. We had a nice chat about Burr Farm and what we are going to do for the new trail.

Thanks to George at Bike29, I got a pair of WTB Motoraptors at really good price and here they are, post ride of course. Knocked out a little 5 mile loop in the Burr Farm area of Newtown and Brookfield. Just a quick lunchtime ride. The Nanoraptors are great tires but I think they are under matched for the really technical trails of New England. When I get another set of wheels, I will probably throw them on because they would be awesome for the rail trails. 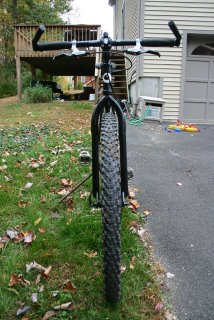 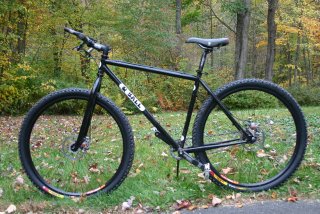 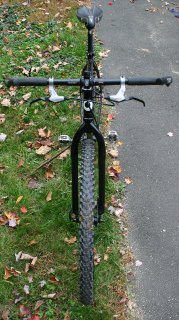 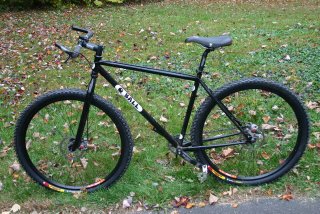 Ironically, though, where I rode today was much better suited for the Nanoraptors. Oh well.