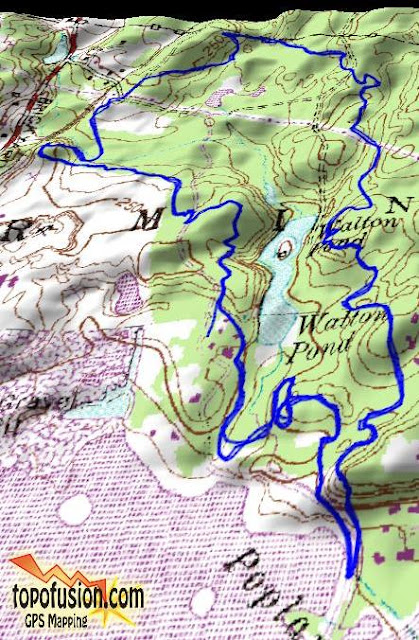 First race of the 2011 Root66 New England Mountain Bike racing season got underway at Winding Trails in Farmington, CT.  It usually takes place at Hop Brook Dam State Park, but since it's a flood control dam the Army Corp of Engineers decided they wanted to test the dam this spring which meant a flooded basin where the ride would be held.  So, I spent my 17th day of the 30 Days of Biking challenge mountain bike racing! 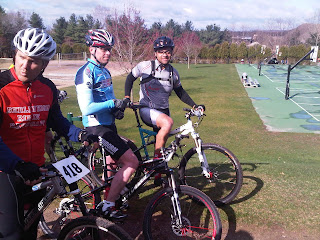 I ran into this guy that I see at all the races (above) named Sam (didn't get the last name) who I think is from NYC.  He's racing for Audi Engineering now.  Below, is fellow Newtowner and Upper Gussy Rider Rick Brodsky racing for the first time in the First Timers heat. 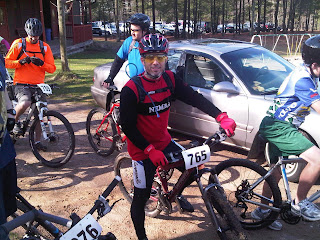 After all the racers were off I headed out on a prelap run with this guy Bill that I see at all the races too.  He used to ride this root beer brown Fuji Tahoe 29er but this year upgraded to a Carbon Fiber Jamis 29er that must have been wicked light.   The Winding Trails Trails Committee changed the course a lot taking out the steep descent that is either a roller on one side or huck (center of map below) and in fact by doing this decreased the lenght of the course by a half mile. 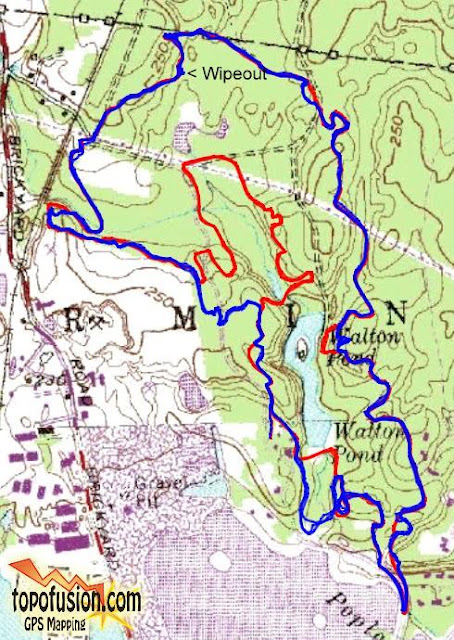 At the whistle all the Single Speeders and myself were off and this time I decided to hang back rather than trying to be near the front after what happened last year when I hit the initial sand pit and almost took out two guys on either side of me.  When I got into the Single Track, I was on the tail of this guy from Boston who at the first log took it funny and ended up veering off the trail, I hit the log over clean and continued down the trail but Boston was back towards the trail so yelled at him that I was coming through and that was the break I needed because I never saw him again.  However, I did notice that I was having problems clipping in and out of my pedals.  I think it might have been the newness of the cleats.
My first lap went pretty well somewhere around 30 minutes but a quarter of the way into the second lap I had a bit too much speed coming into a soft turn and I wiped out.  Landed on my hip, forearm and head but most of my weight wound up on my hip.  Fortunately, the ground was pretty soft otherwise I am not sure I would have finished the race.  I lost 2 or 3 minutes putting my ergon back on but I never saw Boston.  Except for my forearm everything else was fine so I hopped on the bike and kept going.
The bike performed beautifully, god I love this bike!  I managed the softness in the fork pretty well taking all the climbs and mud locked out and then opening up the ABS for the short descents.  On the big descents, I really opened it up and was able to get a lot of speed - the bike just flowed through it all.  Increasing the air pressure helped but I know for sure I will need to get the firmer spring.  The one thing that wasn't performing well were my pedals and feet.  As I mentioned earlier, clipping in and out was troublesome and I think it was due to the newness of the cleats.  My left foot kept going numb which I think was due to the poor circulation in my left leg.  I need to find if there is anything I can do to prevent this from happening. 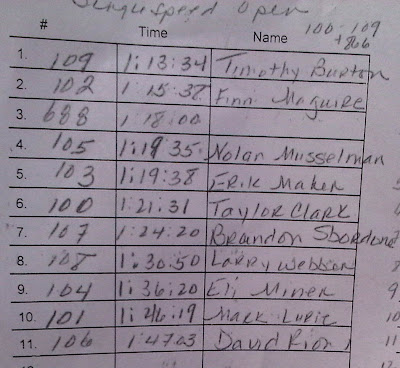 I finished 10th, a whole 10 minutes behind the next guy which got me thinking that maybe I am in over my head in this category and that I should go back to CAT3.  Granted there is no single speed category and the earlier start times would suck but racing against a bunch of geared riders would probably be more thrilling.  Afterall, I am not bent on going anywhere with racing but I love the competitiveness and the personal satisfaction that I gave my best performance.  In fact, what impressed me the most was that I did every climb, except for the last big one but never walked anywhere else. Upon getting back to the car I popped a motrin knowing that I would start feeling the pain sooner or later.  Had some fruit and then it was over to the bike wash.  I ended up giving my much needed PBR to Glenn Vernes, CT NEMBA Treasurer and went back to the car get another one.  I washed off the bike, ate lunch with my fellow NEMBA Racing teammates while watching the CAT1s/PROs come buy into the feed stop.  Overall, it was a great race and really tested my limits.  I think that is why I like racing.  It's the constant pushing to do better.
at 2:56 AM

Great job getting back into the race after crashing. I thought my Garmin was off after recording shorter lap distances from last year but there was apparently a decent amount of the course cut out. Still an improvement overall I think.

I understand that people sign up and pay to race, but based on the condition of the bikes I saw heading home yesterday - some serious damage must have been done to the trails.

Do you concur? Or was the race carried out over dedicated race only trails?

Actually Mark, all that mud came from two long dual track sections that are always muddy on that course.

Nice work, Mark! Don't be discouraged by your result. Had you not crashed you would have been right in the mix.