It all started with the wheels

Brodie and I were working on bikes in the Man Cave on Saturday.  I had him help me install brake rotors on the wheelset I bought for the Qball this winter for commuting.  I showed him how to put the rotor bolts in, screw them down, and then torque them.  He got a big kick out of it and started directing me on what to do after I talked him through the first one. 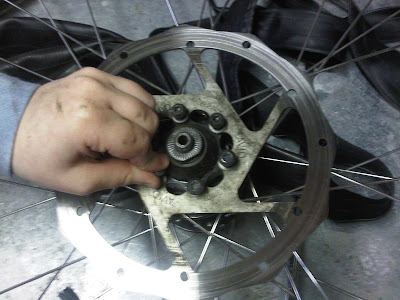 The funny thing is that Brodie, is the most eager of my two boys and wants to ride with me all the time and help me work on them.  His idea of working on them is he likes to clean them so I let him brush them down.  The funny thing is that while he loves to ride with me, I still can't get him off the training wheels.  He wants to ride in the Burley Trailer or on the Trail-a-bike.  I guess it's his way to feel more connected with me.  When I suggest taking the training wheels off and him learning to ride without them, it's always the same answer - next year!

The only problem with this Special Ed wheel set was that it is for Shrader valves and all I have are Presta tubes.  I wanted to roll with my commuting tires because we are going for a ride on the North County Trail Way with my Father on Sunday.  I bought these wheels off a buddy for the Qball to commute with, but the only problem with them is that they are made for Shrader tubes and all I have are Presta valves.  This prompted a trip to the bike shop for grommets.  Probably should deduct points from for 30 days of Biking because I was just at the shop earlier this morning.

The Bicycle Goodie Shop in Bethel stocks a lot of parts, mainly for BMX, which has quite a bit of cross over into my world of Singlespeeds and Fixed Gears.  I was just here this morning picking up a seatpost collar that I had ordered through them 3 weeks ago that I was waiting for in order to start my build on the diSSent.  I know seems kind of stupid to wait on that part but with so many other things going on I used this as the object of my procrastination.  I guess not being able to ride mountain this winter got me all confused. 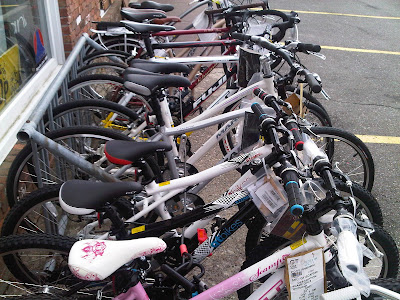 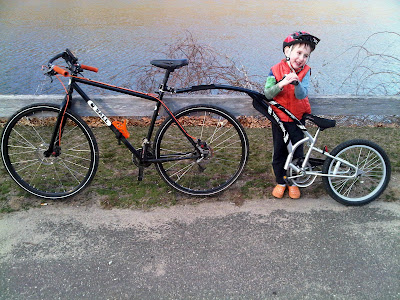 Finally, grommets, presta tubes, Kenda Kross tires and a Hayes 8 speed cassette, which was brand new and sitting in my parts box for 4 years, Brodie and I headed out a test ride.  Mr Happy Stem on the Monster definitely makes a big difference in the ride and the new tires felt nice but it was a little disconcerting because I left the house with no tools, extra tubes, or even water.

We rode down to the boat ramp on Lake Lillilonah and actually saw a boat motor by on the water. 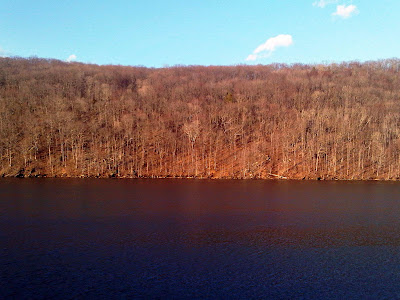 The weather was fantastic and the views spectacular.  Two months from now there will be a lot of boats on this lake and the trees will be green but right now it's early spring and only the die hard fishermen are out on the water. 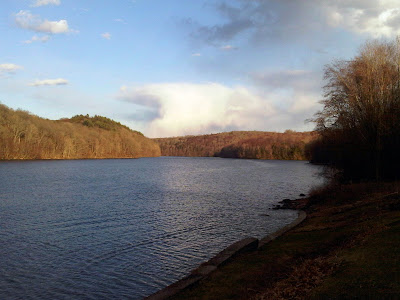 From the boat ramp we rode on some residential roads in Brookfield that I have never been on before and it was a brutal climb because of the extra 80 pounds that I was pulling.  Brodie was helping somewhat but what was supposed to be a quick 4 mile ride in the neighborhood turned out to be a great workout for me. 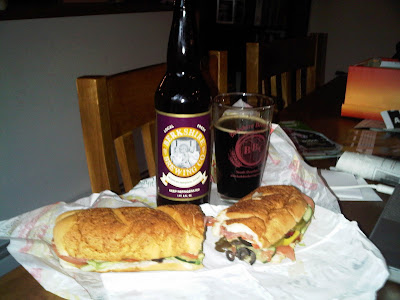 The one thing that I didn't do on my Saturday morning errands was stop off at the Packy for something a little more tasty.  Don't get me wrong, I love PBR but every once in a while I like to treat myself to the really good stuff.  BBC Russian Imperial Stout, goes great with the Spicy Italian Five Dollah Foot Long from Subway! 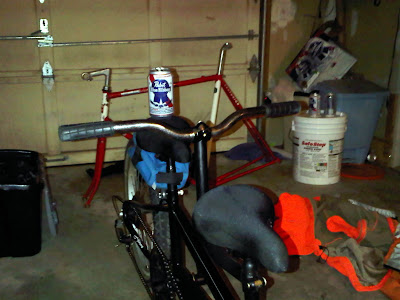 After dinner, it was back to the Man Cave, aka my garage, to clean up and organize a bit so the wife could park her car in her side of the garage.  Also had to get the Tandem Trail-a-Bike ready for Sunday's ride and of course my good friend PBR was helping out, too.  In the back ground is my Iron Man Expert Dave Scott that finally got the paint for and I was going to start painting it this weekend but the other bikes came first.  I had also wanted to work on the Stinson to see if I have a bent spindle but didn't get to it.  Looks like I will be commuting on the Qball next week. 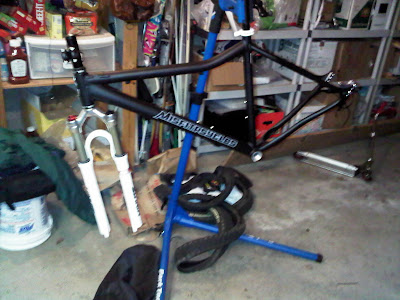 I did start building the diSSent at about 9 PM and ran into an issue with the front brake caliper hitting the spokes on the front wheel.  I don't think there is anything wrong with the wheel, rather the caliper.  I had this same problem on the Dillinger and my remedy was to a 180 mm rotor that pushed the caliper farther away from the fork.  It still seems to be a problem here.  It could be that the great deal that I got on this hyrdo set of brakes might not be such a great deal after all because a buddy of mine thinks what I got was a brake set with two rear calipers. 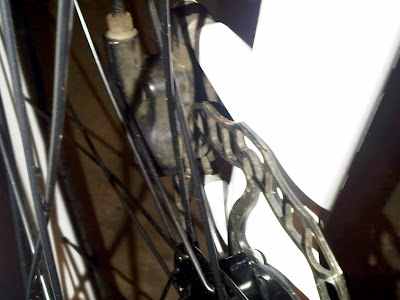 Given that the Manitou Minute29er fork has a posts coming off it instead of a side mount I think I have to find a different adapter to go with 180 mm rotor.  Might have to go back to the LBS and see what I can get that will make this work.  Guess I should have started on this earlier.
at 9:30 AM