10 Miles in the Pequonnock River Valley

For Day 10 of the 30 Days of Biking challenge, I dropped my sons off at their Grand Mothers' house in Trumbull and drove over to the Pequonnock River Valley, aka Trumbull.  It's great having the in-laws living in the same town as one of the best places to mountain bike in Connecticut.  Definitely shorts weather but I had on a long sleeve jersey and a short sleeve jersey.  I have been debating how I am going to race at Winding Trails next Sunday, whether to ride with a seat pack and water bottles or a hydration pack.  Probably go with the seat pack. 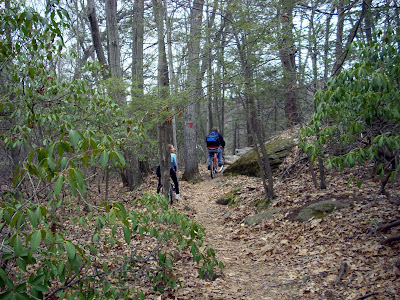 Heading up the main trail (white) I noticed this father and daughter pair who turned off onto the red trail.  I yelled Rider Up and they got off the trail for me and as I rode by I suggested they not ride this trail if they didn't have helmets.  Yes, I am a Helmet Nazi and I think everyone should wear one, regardless if it's chic or not!  You never know when one will save your life.  When ever I ride P-Valley, I always try to make sensible decisions in the Central Maze so I am not doing any repeats.  I don't mind riding the other direction on trail that I have already ridden early but I hate riding the same direction twice.
Today, however, I think I found the way to do just that.  I did my usual circle back from the Blue Trail to the future Purple Trail (just not blazed yet) and onto the White Trail.  Then I followed the Rusty River Trail to where it cuts in and heads up to the maze.  Once in the maze I did the outer loop and then cut in on You've Got Mail.  That is where I found this big rock that that someone stuck a beer can next to and just not any can but one of my favorites.  Hence the name for this feature is PRB-R or PBR Roller.  At the end of You've Got Mail I rode back onto the outer loop overlapping in the same direction for maybe 10 yards (I can live with that) and then cutting in on the other interior trail to the cliff trail 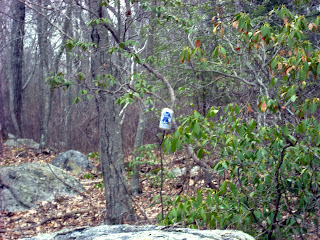 Coming down off the maze I hooked back in the direction of the Green Monster and rode back up the Blue Trail and then ripped back down the White Trail, cut over to the Yellow Trail, rode up Mullholland Drive, down the Indian Cave Trail and back out on the White Trail and made my out.  The extra loop, doing the Blue and White in reverse gave me the extra mileage that I was looking for to round out the ride to 10 miles.  Without that loop this same ride is about 7.5 miles.
at 9:46 PM