Flats on the diSSent

So much to do and so little time!  Day 15 of the 30 Days of Biking challenge was challenging!  Getting home from work around 4:30 and having to make bike changes, always makes me nervous.  My goal was to make a few changes on the diSSent: flat bars, Ergons, check the fork pressure, and wear my new riding shoes which meant putting the cleats on, and then hitting Upper Paugusset State Forest for three singlespeed laps on the new 29er.  What I got was down the drive way by 6 PM and two laps totaling 9.5 miles and an additional mile riding to and from the starting point. 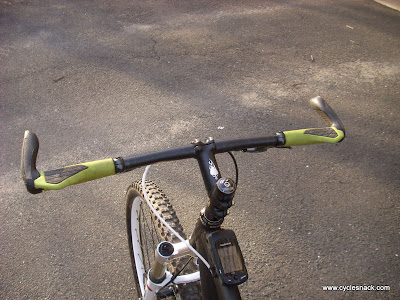 What slowed me down was the shoes and the neighbors.  Looking at my old shoes I thought I put the cleats in the right position but when I tried riding with them they didn't feel right so I had to move them back.  Then the kids went over to let the neighbor's dog out because they weren't going to be home in time and didn't want a fecal present on their rug from Rover but they couldn't get the door open, so I hopped on the Qball, rode over to their house and helped them open the door.  OK, jump on the diSSent and I am having problems getting my right foot clipped.  Finally it goes in but it doesn't feel right.  Left foot is fine but the right seems loose. 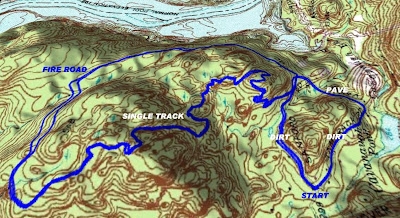 My start point is the intersection of Sanford Rd and Tamarack Rd and as you can see on the map above there are sections of Dirt Road, Pave, Fire Road, and Single Track.  One lap is almost 5 miles but at some point I am going to throw in some more trail to increase the lap to 6 miles.  It's funny but last year I was doing training rides at another location but with all the variety that place had to offer and my own constant flagellation of what would be the best work out I could never just settle one route.  Given that Upper Paugussett doesn't have much to choose from I am stuck with what I have.  But you can't beat the convenience, especially with the price of gas already over $4 here in CT. 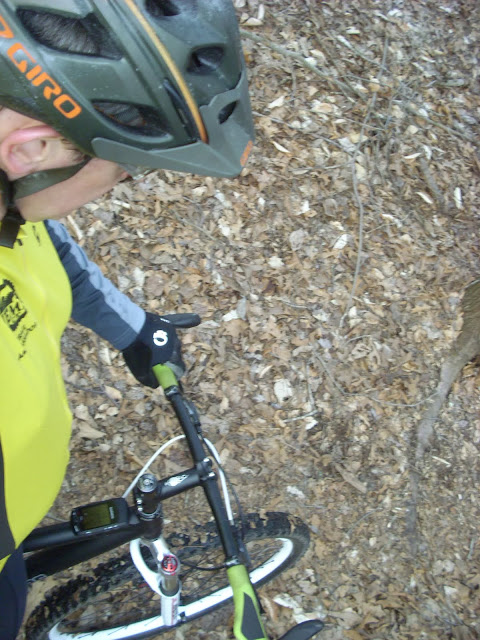 Back to the bar change.  Well, the first thing I noticed was that the bars were too high.  I had the stirrer cut high but the stem centered in the middle so I could work on fit but it clearly needs to come down an inch.  In fact that nagged me on the whole ride.  However, the flat bars are the shit for racing.  I felt like I had much better control in then technicals and leading into up-and-overs where you need that quick pull up to get the front tire onto the surface.  The Ergons, however, gave me the extra leverage I wanted to climb. 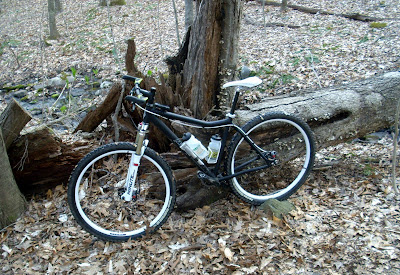 First lap went pretty well, only had to stop once to give some hikers direction to the Blue Trail and on the second lap I was making even better time.  I think I was more warmed up to riding but it was still pretty freaking cold but getting used to controlling the fork better.  I have been in contact with the technician at Hayes, I guess they own Manitou, and he gave me some tips on where I should run the ABS on the fork given I really should have a firmer spring than the medium that shipped with the fork.  Definitely locked out for the climbs and then a few click from locked for most of everything else and then wide open for the DH runs.  The only thing I forgot to do before leaving the house was check the air pressure in the fork (after the ride I checked and it was around 70, the tech said it could go up 110, so I added air but have yet to see what that's like). 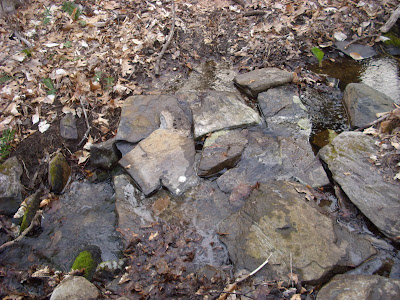 On the second lap I did make one stop at the double stream cross to fix the armoring.  I have been dapping through here because a loose rock that I finally moved and replaced with the two flatter rocks.  But they are loose, too, and probably won't help much.  Next time through I am going to remove them and drive on!  In fact, probably use them on the other part of the stream crossing because it's getting a little messed up now.  The Wet Spot needs some work, too.
at 8:18 AM