My 23d day for the 30 Days of Biking challenge was another mountain biking race.  While I can't take credit for the title of this post, that goes to MaggieMeats, a Boston mountain bike racer that I found by using #NEMBA hash tag on Twitter.  However, breathing wasn't my problem rather I think it is combination of things that led to a pitiful performance on a course that kicked ass on last year. 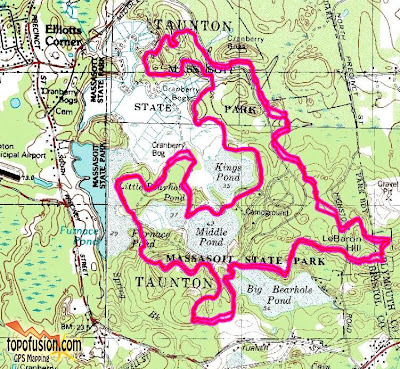 My pre-lap was great, cleaned all the climbs except for the last three but I knew going into this race that I would never make those climbs and I was pretty water logged by the end of the lap.  Back at the car, I changed out of my we gear and into dry gear while having lunch.  I was really thankful that I met Hal Green Windsor to pick up my NEMBA Racing Kit and the NEMBA Tent that was key to my happiness at this soggy event. 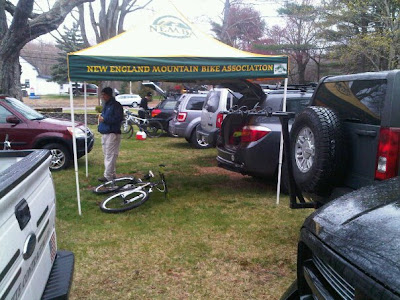 The tent made it palpable to make some last minute changes on the bike, like tighten my chain because it dropped on the pre-lab, that has never happened before.  I also increased my tire pressure to 30 lbs and I think that was my first mistake because the I didn't have as much foot print for climbing. 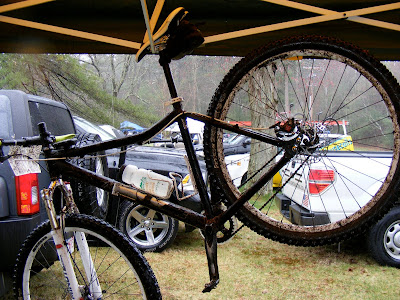 I should have changed my socks, too, because they were wet going into the race and only got wetter, to the point where it felt like my shoes weighed a ton and my feet were constantly swimming.  I started the race with warmer gloves and a riding jacket that I should have ditched before the race started because the mesh pocked in the back got tangled with my jersey as I was trying to change gloves.  The gloves that I started out with quickly got sodden and while I brought along a second pair, switching them out was a pain and I should have just tossed them.
Second lap was a little better but my feet were bugging me.  I did find a second wind midway through the course when I started having fun hopping the roots on one downhill section but then I started riding a little more conservatively because one landing got a little sketchy and I really didn't want a repeat of last weekend's crash.  The other problem I was having was no brakes.  I think a combination of all the water and mud was reeking havoc on them and I had to jump off a few time and adjust.
On the last down hill, it was complete grease and I was riding the brakes and just sliding down the the hill when my front wheel spun on me and and I dumped it but jumped off without any injury.  The final run to the finish line I started spinning like a gerbil in a habit-trail only to have my chain drop, again!
Wow, what a ride.  I finished and boy was I finished.  I knew I wasn't the last guy on the course.  There was another guy with brake problems, too, that I passed somewhere at the end of the first lap that finally came in while I was going to check the results.  Turns out my team mate, Fabian, somehow took a wrong turn and ended up in someone's back yard and after back tracking managed to get 11th, while I took 13th.  I think my problem is that I don't have enough of a base on this bike.  Riding the Gussy isn't going to do it for me, I think I need to do more rides after work at Huntington.  Just need to find a good course with a good mix of single and dual track to the tune of 7 to 10 miles. 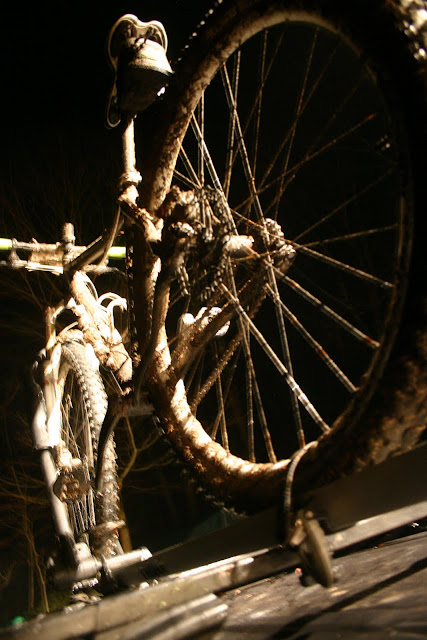 Fabian and I stopped off in Mansfield for Chinese food and then drove home.  The three hour ride in the car too long and I don't think I will hitting a venue over two hours distant in the future, although, I won't rule out the Bikes for Bovine Race up in NH which is just the other side of Brattleboro, VT.  That's supposed to be a fun course, kind of like Domnarski Farm with a huge climb and then huge descent.  I never really had time to take any pictures myself, or should I say, I was kind of fed up once the race was over.  Getting home, my daughter suggested a snap a few because the mist and the light from the spot gave the bike an eerie appearance sitting atop my car.
at 2:52 PM