What a beautiful day for a bike ride! 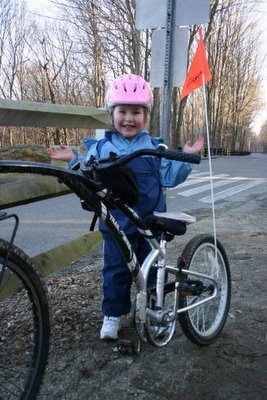 Getting here was easy, my daddy does all the peddling! 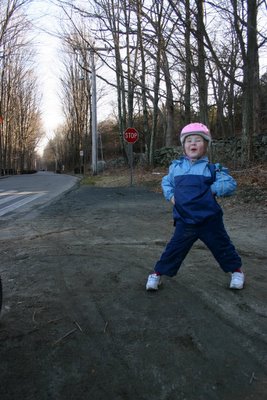 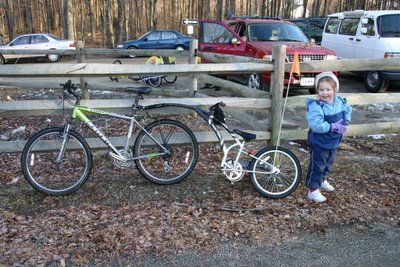 The Kid Rig. Adam's Trailer Bike. Only we need a mud flap. By the end of the is ride, Katie was covered in mud and loved it, of course. 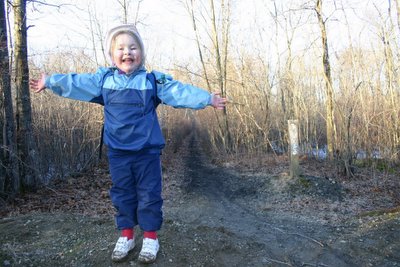 End of the line! Oh, and by the way, check out the muddy shoes!

Given the expected high for today, I loaded up the Saris with the Trek and Katie's Trailer bike and Katie and I headed down to Monroe to take another ride on the the rail trail. It was beautiful out!

The trail was soggy, though, and it was very difficult to peddle, espcially while pulling an addition 70+ pounds. None-the-less, we had a great time. During one of the many stops/breaks Katie had to get her new sneakers muddy. Oh well.
at 11:20 PM 1 comment: 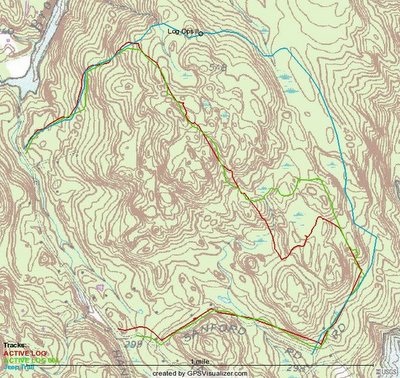 So, I have fallen out of my usual regimine of posting the post game show of my latest ride. I guess you could say that have taken another step forward by getting involved with the New England Mountain Biking Association (NEMBA). I am also now involved in trying to get a trail created in a local state forest that I came across one day while googling for maps.

I came across an entry in the CT Horse Council Website that mentioned that the Newtown Bridal Lands Association (NBLA) was trying to put a trail in the Upper Paugussett State Forest, which coincendentally is amount a half mile from my house and where I ride frequently.

I guess what caught my eye was the trail that they were proposing would traverse some Newtown Open Space lands and NBLA was going to ask permission from the Town's Open Space Task Force for that trail to traverse the town's openspace. Well, being a member of the Open Space Task Force I was immediately interested in this and thought that it might be something interesting to get involved with, both from an Open Space and a Mountain Biking aspect. That very same day, the Newtown Bee came out with a Newtown Resident Profile of a person who just happens to be the president of NBLA. Called her up and she put me in touch with the woman leading the trail effort.

After many emails between NBLA, CFPA (Connecticut Forest and Parks Association - those guys that maintain all the blue dot hiking trails in Connecticut and who vehemently oppose any other use of the trail system except to hiking - which is kind of ironic because the State of Connecticut is trying to promote cooperation between the various outdoor recreation groups, but you will see in my next post the spirit of that cooperation), Connecticut DEP, and NEMBA, it appears that the initial effort of NBLA ran into a few brick walls and was wallowing in the mud looking for direction. So, I jumped in, trying to get the ball rolling again, only to be shot down in flames by CFPA spokeswoman in a very unprofessional and disrespecting manner. I will post a transcript of those emails in a future post.

As for the future of this new trail, the biggest stumbling block is that it runs atop existing blue dot trails, and just for that fact, the CFPA started making all sorts of demands and stipulations before we could even get together and get something going. It's a shame when people prejudge you before even having the opportunity to meet and discuss the issues. Now it seems that NBLA is shifting their focus to the Town's Fairfield Hills property, the former Mental Institution that the town bought/took possession of from the State of Connecticut in the hopes of economic development.

Apparently, there is a trail system on that property that is very convienent for horse back riding, walking, XC Skiing, and biking. However, it seems the commission in charge of developing the site just wants to pave the trails over in asphalt. I have yet to check out these trails but I hope they don't pave the trails. While a paved loop would be nice for the mothers and children, hopefully the other trails will be left alone. Of course I need to get in there and ride around and see if there any good Freeride/Stuntry features.

Its kind of funny, I get a GPS for Geocaching but find with young kids, its impossible to go geocaching, at least with my kids that is. Then I get a mountain bike (my wife claims its my midlife crisis, wanting to be a kid again, but I tell her - well I don't think I ever grew up) and absolutely fell in love with riding. Then I find this website, www.crankfire.com which is dedicated to Mountain Biking and GPS, and now I am hooked on making trail maps.

I am also making trail maps for a site called www.bikerag.com, too. So, the mapping projects that I am currently working on are:
Ought to keep me pretty busy for the time being. Here the link to my first published map on Bikerag: Burr Farm .

As for activism, I joined NEMBA, and in January traveled up to Middletown for the monthly board meeting and volunteered to be the membership coordiator. I want to give something back but with the kids, just don't have alot of time to give right now. So we will see what this brings. Looks simple enough.
at 9:44 AM No comments: