Will and I met in Katonah, NY on a very rainy, yet somewhat warm Veterans' Day to ride, once again, the Dirty Martha Gravel Grinder.  This is a route that I found online that needed a few tweeks. In the spring of 2014, nearly 18 months ago, Will and I rode this route but due to some mechanical difficulties on my part, we didn't complete the intended route in it's entirety. 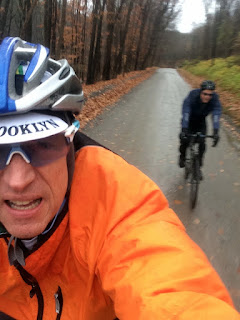 We delayed almost an hour and got a bagel in the village hoping that the rain would stop but a quick check on the weather app didn't look as promising as certain media outlets had predicted.  We headed out in a light rain.  The last time we rode a gravel grinder in the rain was last year's Foolish Classic and while it wasn't a race we DNF'd due to the cold.  Knowing that we were likely to have the same conditions I was much more prepared.  Starting out, however, it took a few wardrobe readjustments until the right combination of attire was found. 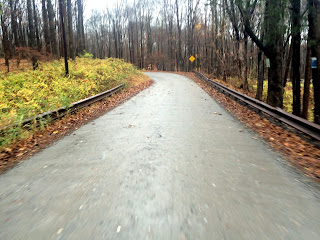 This year we headed south as opposed to last year's decision to ride north mainly because I didn't have the Gravle Guide to show me where all the good dirt was.  This time around, though, I discovered a new dirt road that re-emphasized that this was indeed the right way to go. 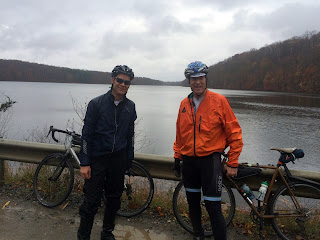 15 miles into the ride we arrived at Byram Lake and nice a couple walking their dog offered to take a picture of Will and I.  Of course, they thought we were crazy to be out riding dirt roads on a rainy day.  This is a great place to stop for a snack and take in the beauty of the lake.  There is also a haunting tale of this lake where a school bus crashed into the lake and everyone on board drowned and the victims still haunt the lake. 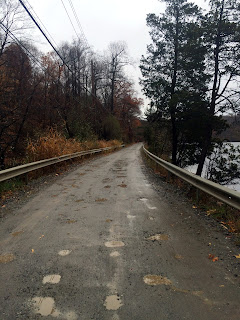 Last year, we went through Chappaqua to get here because there was one dirt dirt road over by the New Croton Reservoir that I used to tie the route together but there was a lot of pavement in between. Having the Gravle Guide revealed much more dirt between Bedford Hills and Byram Lake which created a much dirty route to follow.  The big surprise was on Wood Road, which was a lot dirty then first recorded.  That's one of the beauties of Google Maps street view and Westchester County, it seems every road in Westchester has been driven with the camera. 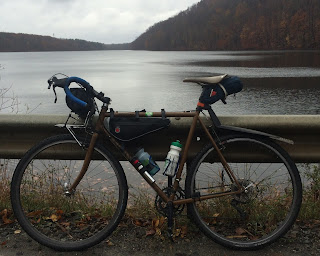 The major difference between last's ride and this one was we were coming off a hard winter. 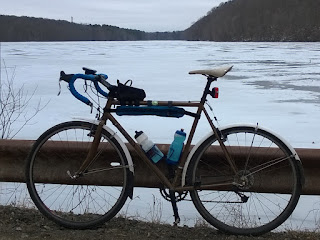 And of course, my bike went through some changes.  The major ones being the removal of bar end shifters that were replaced with Retro Shifts and I ditched the fenders this year because I wasn't using the Cross Check for commuting.  I have also been through a few different frame bags, too, and tried some different combinations of top tube bags and seat packs. 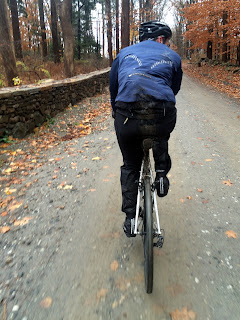 Will made a smart decision to wear rain pants and over shoes.  Without a rear fender, Will developed quite a muddy posterior.  While I made a last minute decision to just wear my Lake 303s and while I probably should have brought my rain pants, I was fine without them.  The one thing that I never took off was my rain jacket.  That kept me pretty warm the whole time and I was grateful that I kept it on. The route was planned to take a dirt road into Ward Pound Ridge Reservation but that turned out to be private so we rode Rt 121 into Cross River.  Heading up through Cross River we hit two steep climbs, one on Old Cross Rover Road that topped out 15% and the other on Holy Branch Road at 19%. 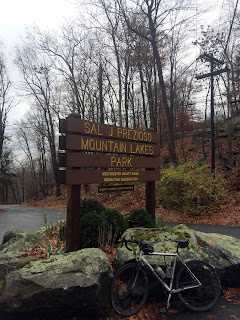 One change in the route this year over last was the addition of Mountain Lakes Park.  I came across the park map and found that most of the roads in the park were not paved so of course, I had to add that to the route.  The first 3/4s of a mile in it's paved but then you come to a gate and it's all gravel from then on.  It's about two miles of hard riding!  The climb up is biggest on the route with a 600 elevation change from Twin Lakes to the high point on the road in the park. 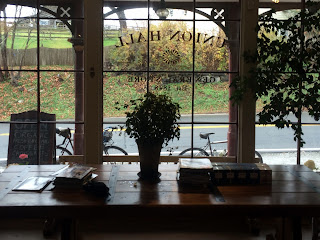 The route was supposed to take a dirt road called Howe Lane from Rt 121 over to Keeler Lane, which is the steepest climb on the route that tops out at 27% but it's a private, so we had to detour around. During that detour is when we found the Union Hall General Store. We got to Cross River too early for lunch and the next available place would have been up around Peach Lake but it would be nearly 3 PM till we got there so we stopped here for a bite to eat. It's more of an eclectic kind of store with some food offerings that weren't bad but not what I would have expected. 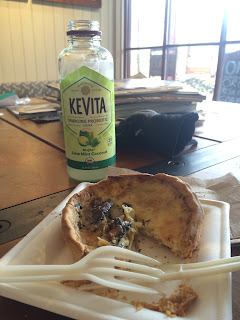 With the stove out commission we had to settle for Quiche.  It was pretty good but that little egg pie was pretty expensive.  The lime, mint and coconut Kevita was refreshing but I probably should have just gotten the hot chocolate or a cup of coffee, because it too was expensive, too.  After lunch, it was up Keeler Lane and the steepest climb of the route.  The backside is dirt and comes out onto Rt 116 near the CT Line and Ridgefield.  From there its up Vail Road and then hook around back towards Rt 121. 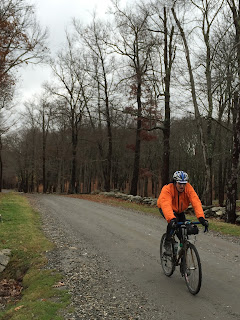 From Keeler Lane we cut across Rt 116 onto Vail Road, which is a substantial climb, too.  It's really pretty up here and the quintessential Westchester County Horse Country.  Not only did we see plenty of riders but there was also quite a few road apples to dodge.  Will took this picture of me climbing to the top of Vail Road.  Wet dirt roads really suck the life out of you.

From Peach Lake, it's pretty much all downhill.  One great dirt road was Turkey Hill that I had planned on riding last year but due to my pedal breaking we bypassed it.  Definitely worth riding.  From there it was mostly last year's route in reverse.  When we go to Route 35, though, we bagged the last three dirt sections and headed straight for the start point and a cold beer!  Another great ride!

A chilly Sunday morning spin around the Saugatuck 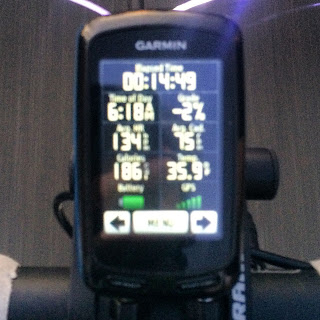 Headed out at 6 AM Sunday morning for ride with Gavin around the Saugatuck Reservoir.  It was definitely not warm enough for shorts but with winter tights, a base layer and my Cannondale Performance Softshell, 15 minutes into my ride I had to open the zippers, it is the best riding jacket!  It takes me approximately 30 minutes to ride down Route 25 to the Burrito Shack where I have met Gavin before for rides in southern Newtown, Monroe and Easton.

Gavin rolled in a few minutes after me and he had a few layers on as well.  I was going to plan a route but then just decided to wing it.  Gavin, on the other hand programmed one into his new Garmin Edge 510 so I followed his lead.  Despite the cold temperature, it was a great day to be out on the bike. 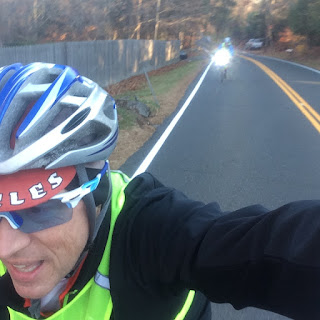 We worked our way through the back roads from South Newtown, past Guskie Pond and through the corner of Monroe and into Easton. 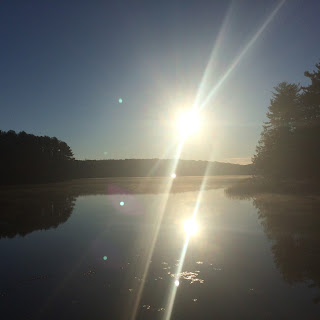 Quick stop at the Hemlock Reservoir to take in the sunrise and marvel at the water because it was like glass. 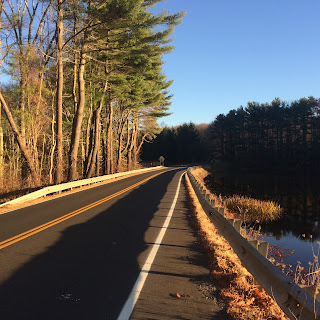 There were surprisingly very few cars on the road at this time. 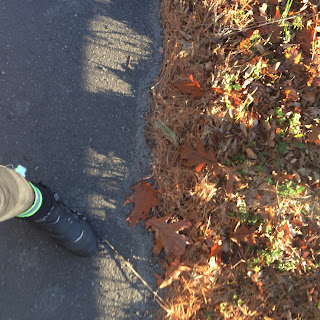 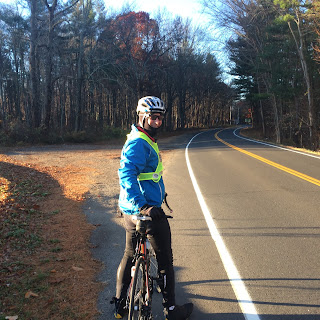 Gavin still had his fair share of snivel gear on 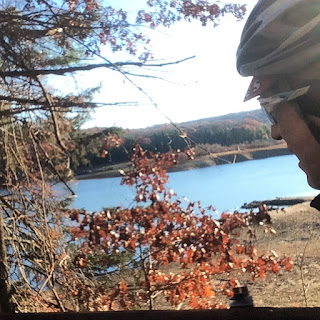 It was amazing to see how low the reservoir was when the last time I rode through here, mid summer, it was at capacity 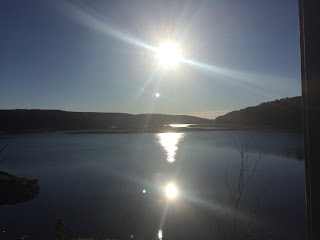 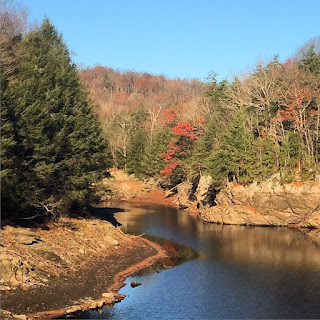 It was so low, the river wasn't even flowing! 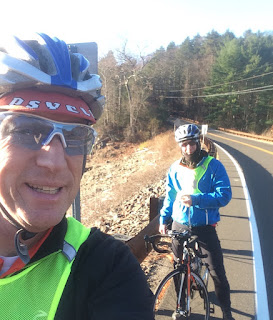