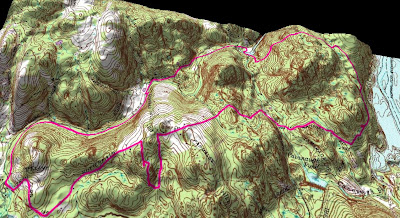 I had originally intended on leading a Turkey Burner down at the Pequonnock River Valley in Trumbull but as luck would have it it was raining so that was a no go.  I waited till the afternoon and headed out for a little adventure on the Qball Monster for a little post Turkey Day Monster CX ride around the neighborhood. 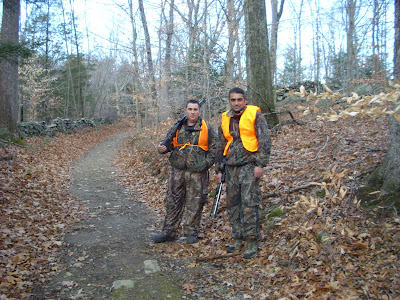 The ride started at the entrance to Tamarack Road, which is dirt, and then I took Sanford Rd (also dirt).  Heading into the forest (Upper Paugussett) the dirt driveway turned into a gravel logging road also known as the Poly Brody Forest Road.  Came across these two hunters who were out looking for hooved rats.  From there I climbed the hill to about the highest point in the forest and then descended down to Pond Brook.  Quick jog onto Hanover Rd (first pavement) but then got off the hardball and into the dirt at the boat ramp.  Picked up the old Shepaug RR bed for 100 feet, crossed over Hanover and was back on dirt for Pond Brook Road. 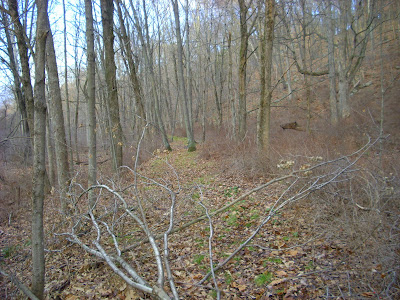 Pond Brooks turns into Hardball at Lake George but I had to endure the shame of riding on asphalt for about 100 yards till I crossed over the stream and got back on the old Shepaug RR line.  The last time road this trail was in 2005, might have been first or second time on a mountain bike and I didn't go that far.  This time, however, I decided to go all the way (to Curituck Road). 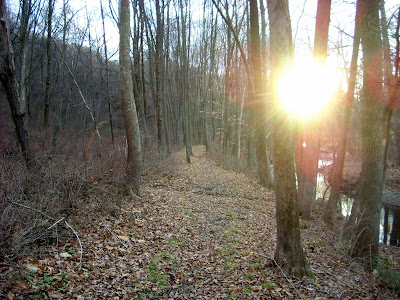 The local horse people call this the Ash Track and it wasn't that bad.  There were a few wet spots here and there, and quite few blowdowns.  One even caught the saddle of the Qball and I figured it was a perfect photo op. 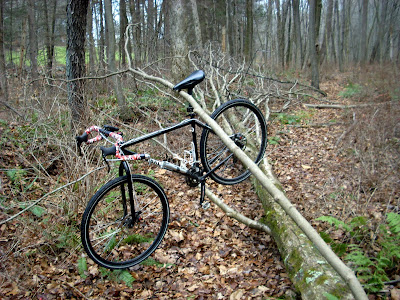 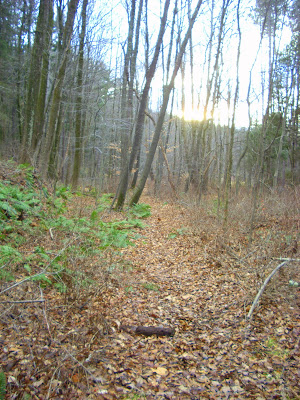 By this makeshift bridge (background) are old railroad ties that must be over a 100 years old. 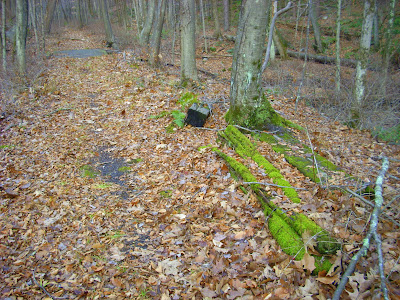 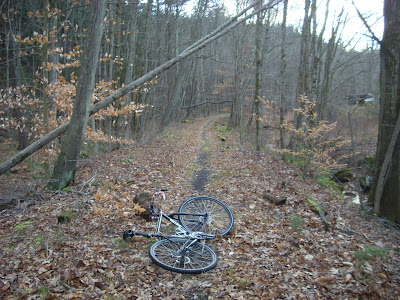 The trains that ran on the Shepaug line over 100 years ago brought milk from Litchfield, CT down to Bethel and then to Norwalk where it was loaded on ferries and sent to NYC. 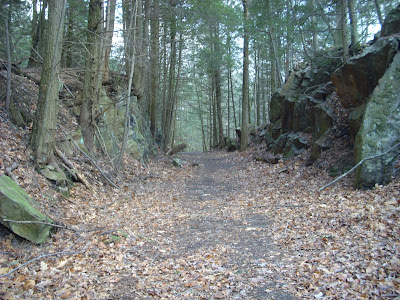 After the town openspace the old rail bed goes through a cut which reminded me a lot like Steep Rock Reservation.  Same line in fact.  After the cut, however, the bed gets worse and worse.  At the gas line I had to carry my bike through the reads and prickly bushes and then bailed altogether on the bed and rode a short distance down to Curituck Road.  The it was 30 yards up to Adams lane, left on Adams - yes I had to endure the indignity of riding on more asphalt but then I banged a right onto Kenan and that turned to dirt. 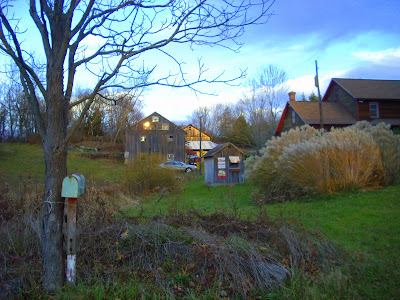 There are two, really old farm houses on Kenan, one of which has all manner of barns and out buildings, with lots of old signs everywhere.  My dirt Shangrila was short lived because I was back on Curituck and then it was Butterfield.  Butterfield is now buttery smooth but that didn't do much counter the chagrin of riding on more asphalt.  Finally though I came to a horse trail that cuts over to some Newtown Forestry Assocation land.  The initial part of the trail was easy to follow but further in it got tough.  There was really nice terrain back there and I was wishing I had my mountain bike.
The trail, while difficult to follow at times eventually cuts across the gas line and winds up at near the other side Georges Hill.  Someone told me there was more trail that led eventually to Daniels Farm Lane but I didn't find it.  Instead I climbed the old right of way for Georges Hill, only it looks like the equestriennes made their own trail braid because the old road was pretty washed out.  Still, I had to use the upper most section to get back to Butterfield. 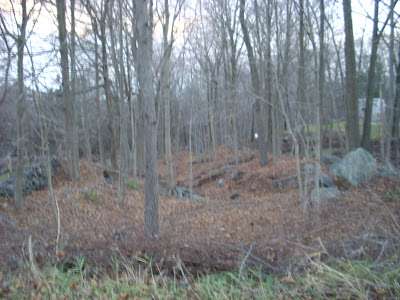 Back on Butterfield I experienced a gorgeous sunset but the waning sunlight meant I had to get home fast because I didn't bring any illumination with me.  Thought about it before leaving the house but bagged it to minimize bringing extra stuff that I wasn't I needed. 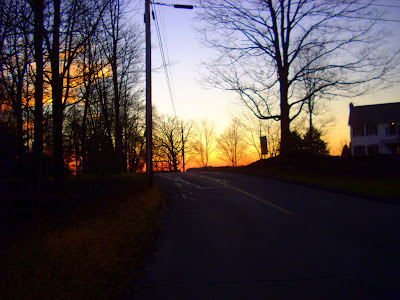 No time to look for more dirt, just bombed down Butterfield and then road home.
at 6:04 AM

Looks like quite the adventure. With the imminent rain I ended up heading to the movies.

I hit this after the movies. Not recommended but something I wanted to try for quite some time.