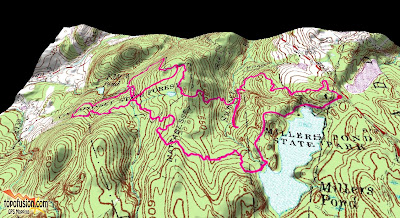 Miller's Pond State Park in Durham, CT is one place that never gets old.  While there are two main mountain biking trails they never get old.  Largely because they are superbly well maintained and completely adapted to the sustainable trails concept.  On top of that, there is so much stuntry that if you wanted you could spend all day here.  CT NEMBA's second annual Vet's Day ride took place here.  I arrived a little late because after my earlier Monster Cross Ride and needing lunch I was running behind schedule and the larger group was already heading out. 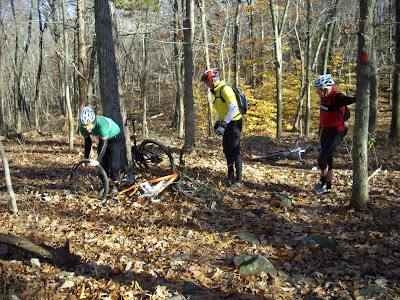 The later ride was still pretty well attended with some local mountain biking celebreties that included Charlie Berstain, Salem Mazazway, Bill "The Old Coot" Boles from Dirt Rag, and Harold "The Hammer" Green.   We had a few members from the NEMBA Executive Board paying the Chapter a visit and of course it was perfect timing that we would have a ride.  Leading the ride was CT NEMBA Secretary, Glenn Vernes.  Our Treasurer, Al Tinti, and another member and Trail Ambassador, Earl Weller was riding with us.  Of course, it wouldn't be CT NEMBA ride without at least one mechanical, Brendan (of The Beat Bike Blog) got a flat during the first mile of the ride.  Of the 9 people on the ride, 6 of us had 29ers, and Salem was riding his Vicious rigid with gears, and I was the only single speeder. 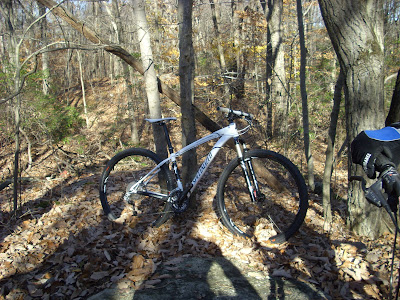 Glenn debuted his new Special-Ed Stumpjumper 29er.  After riding his rigid, single speed Monocog all season, I barely saw him on this ride.  I think I over did it in the morning because I was sucking wind the whole time.  For once, and I hate to say this, but I think it would have been good to have gears.  That might be a good option for the Dillinger.  Since I want to go back to a Steel 29er, all I would need for the Dillinger is a rear derailleur because I have everything else in my bicycle parts bin. 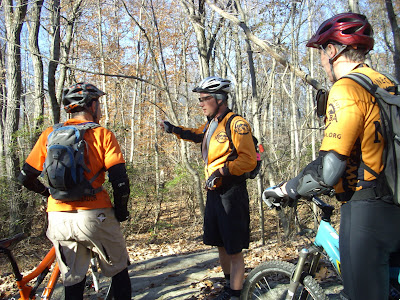 Glenn is strategizing on routes to ensure we hit all the goods on the XC trail. 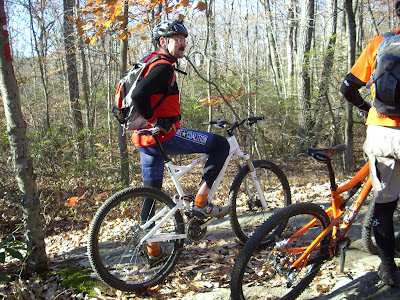