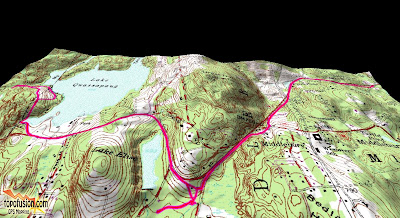 The inaugural ride of the Adams Tandem Trail-a-bike was great.  The boys need to learn to work together a little better but they did well.  It was cold on Sunday, mid 40s but the wind brought it down to feeling upper 30s so I bundled the boys up in warm jackets, thermal shirts, ear bands and gloves.  Of course, I wore shorts with a long sleeve jersey and a thermal running top, and then a short sleeve jersey.  I was fine until later when we descended down the Trolley Trail towards the center of Middlebury. 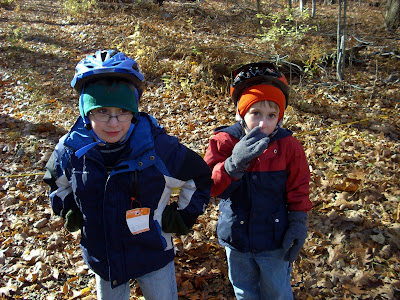 I took them into the back of Flanders Nature Center, the Whittemore Sanctuary, to check out the old road that goes from Lake Quassapaug to Tuttle Rd that I want to include in my Tribury Monster Cross.  The dirt road is perfect, New England Monster Cross terrain, in fact it seems there are quite a few interesting trails/carriage roads that are worth further exploring.  I think I might have to slap on the 2.1s and roll in there and check out all the trails, as well as explore around the Woodbury Reservoir. 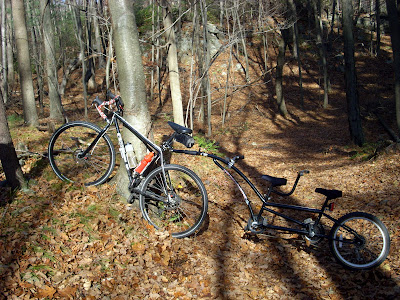 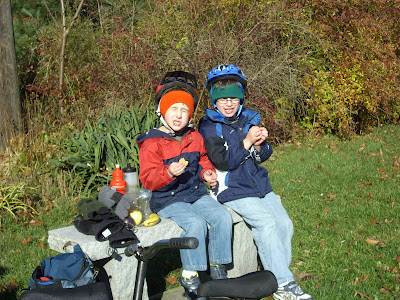 Then it was back to the Trolley Trail and a ride down to the center of Middlebury.  Neither Elliot nor Brodie could shift the gears largely due to their gloves I think.  Still we had a fun time riding to the turn around point and of course we needed a little snack while basking in the sun.  The favorite was the Oreo Cookies while the fruit went untouched. 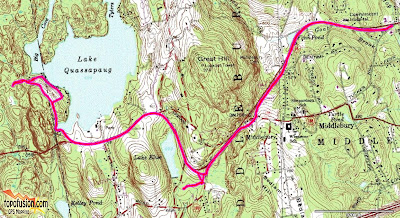 After snack, we mounted back up and took off back to the starting point.  It's all uphill from here and I could really feel the extra 150 pounds that I was pulling.  The boys were helping a little when they were not fighting with one another about who is not pedaling forwards. 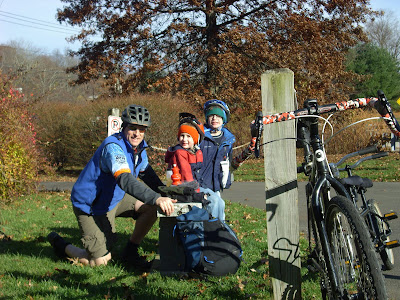 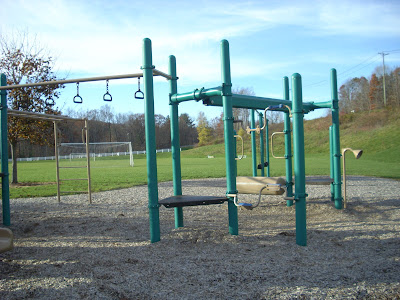 Part of the draw that get's my boys out with me is the chance to run around the park.  In fact, that's one of the reasons we never have gone back to Old Put because I haven't found a decent park along the way.  There is a great park on the North County Trailway in Yorktown Heights that we need to try.  Might have to wait till the spring and work in a ride with my father for that one.  Monroe has Wolfe Park and the Farmington Canal line has Brooksvale Park in Hamden.  Brooksvale doesn't have a lot going on but it does give them a chance to stretch their legs and play on the little Jungle Gym a bit. 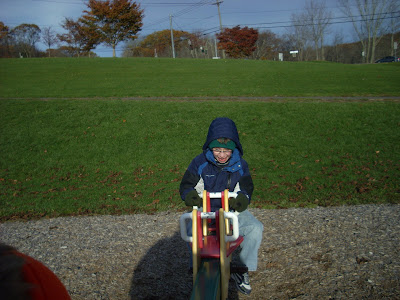 Elliot and Brodie just know this park as the Seesaw Park because it has a seesaw of course.  We even run into the same kids from time to time. 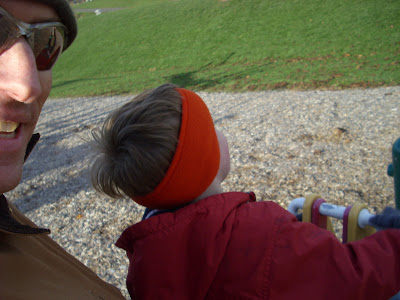 I've towed the single, but never a double; must have been a good workout. I like the new banner picture.