All this for 20 minutes of riding 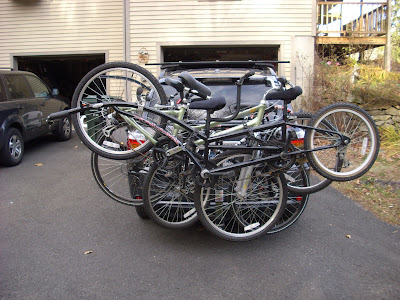 My wife didn't have a lot of time but really wanted to go riding with us so after getting back from my Twofer ride on Sunday, I loaded up the Qball, Katie's bike, Michele's new bike (only been ridden once, last year), the tandem trailer. One and half hours later we headed over to Fairfield Hills, the former State Mental Hospital to ride the Town Recreation Trail. Elliot really wanted to ride the rail trail down in Monroe because he loves going to park and when he found out were riding here he threw a fit. Took some time to coax him out of the car.
Finally we were off but not without problems every rotation of the crank. The boys were fighting over which direction to pedal. Katie was in a huff because we were going too slow, and Michele's bike needed more adjustments along the way. Then there was the water break. Everyone had their own water bottle but that didn't seem good enough. Wow! What a ride and we only pedaled 1.6 miles!  I was ready to be committed. 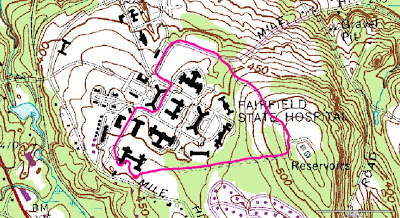