Mud? What mud? Was it really that muddy at Hop Brook today? 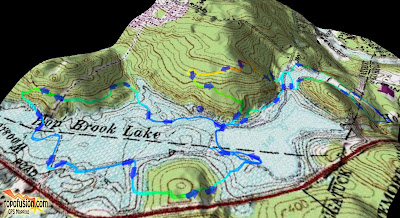 Well, there were some mud bogs at Hop Brook but it certainly wasn't sloppy seconds as everyone thought it was going to be. I think the CAT1 racers probably got it the worst but by 2 PM it firmed up nicely. I think the ECHO Elders need to administer some disciplinary action on two of their members, those two brothers who wussed out on today's race. I think the brothers need to wear the tube of shame (which should be a 29er tube) on their next ride. ECHO was represented by Zac, though who took 6th in the CAT 2 race for the 19 to 29 yr olds.
My goal was to finish and that I did but it was an interesting ride to say the least. I think I had the wrong rear cog for this course. I was racing 34:22t when I probably should have had a 21t or 2ot because in the flats it was spin class with no resistance. 22t is my climbing cog but there were 2 climbs there were simply brutal and I walked both times. I don't think my time was all that hot, 1 hr 31 min, and 10 out of 10, but I am not racing to beat anyone, except maybe myself.
Since Thursday's training ride I have been having a few issues with the bike. I replaced my chain on Wednesday because the old chain was creaking like crazy. I think that chain was used on my Fixation and Qball and it was high time it was replaced. The new chain was making noise on Thursday so on Friday I flip flopped the cog with a spacer and lubed it up and that worked for the most part. The other issue I was having was the with the front brake. I wasn't getting enough braking power with it.
Saturday morning I re-adjusted it and thought I had it. In the parking lot it wasn't quite there yet so fortunately I had time to adjust it. By race time I thought I did but it wasn't quite right. Descending one of the big down hill sections my front wheel almost came off so I stopped and tightened the QR down even more, and that seemed to fix the problem all together. I think I might take the wheel in and get it looked at. 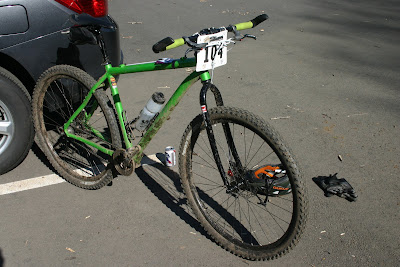 Of course what motivated me the whole time was thinking about that ice cold PBR I had sitting in the cooler. 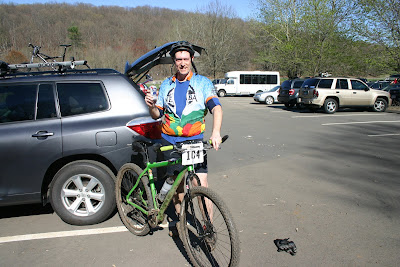 It hit the spot after 10 miles of suspensionless riding. 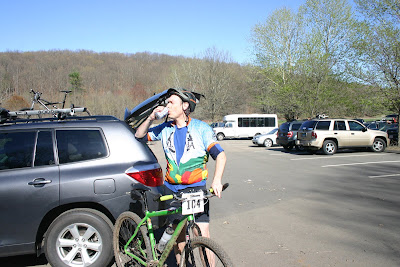 See, it wasn't that muddy! 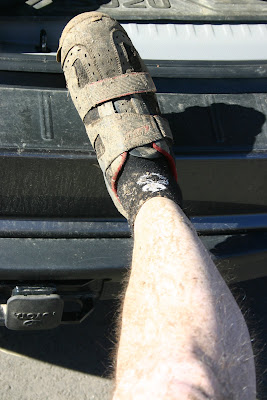 ECHO Elders, take note. Zac is a trooper. Makes the schlep over to Western CT, races, and is rewarded with an ice cold PBR! 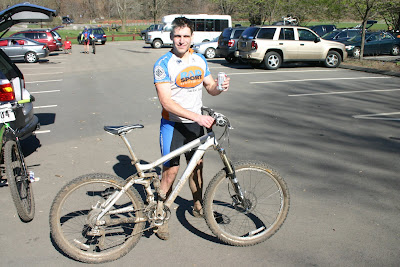 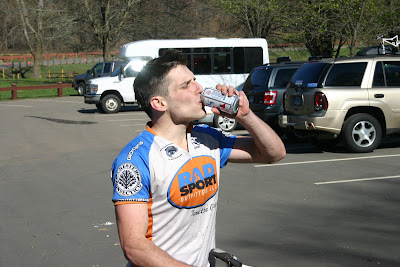