No, I didn't go to Elans today after work, instead I did a 7 mile training lap at Huntington instead. I wanted to do more but I got caught up in the End of Day Dance. That's where all those calls you were supposed to make before 5 o'clock rolls around you put off until 5 o'clock. I was good, it's just some of the people that work with were not. Needless to say, I got to the Dodgingtown lot at 6 PM and was all set to take off when I got the call of nature and needed to take a ride on the Hippie Bus (composting toilet). 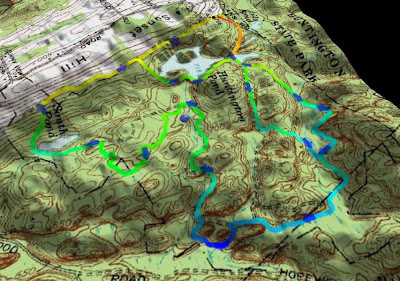 With my constitution re-aligned and maybe a few pounds lighter, I headed off on my first training ride of the season. I guess you could say when ever I am riding my singlespeed, alone, it is sort of training ride however on this ride it was all dance, dance, dance and no time to stop and enjoy the scenery and make idle chit chat with the other cyclists. Like the dude that was huffing and puffing up the blue trail wearing a full face and full pads. Looks like he stopped for a breather after making that climb, but I just blew past him.
I tried the new South Pond Connector Road that the State built earlier this year. They did a great job putting in the gravel road that that will allow emergency access to this part of the park and it's a great climb. So the lap I rode was 7 miles and I did it in 50 minutes. I probably could have done it better and since it was the first time out I lost time thinking about where to go next. I think I am going to play with map-my-ride and see if I can come up with a 10 mile lap and then try to bang two of those on Thursday morning.
at 11:00 PM