We are not Weenies!

The first time I heard that phrase it came from the hottest, blonde, female, US Army Military Intelligence Captain when I was at a Military Show and Tell while a cadet at Ft Lewis in the late 80s. We had just come from a two week field exercise when she appeared and of course every guy in the platoon woke up. Clearly she wasn't done by getting our attention with her looks because she wanted everyone to know that the Military Intelligence Branch were just as tough as the war fighters. Whether or not we believed what she was saying she definitely got our attention for sure. I am not going to admit at this point that I am a weight weenie instead let's just say that I am now weight conscious!
I think when first wrote about my Dillinger I said the plan was get the bike done and start riding it. Lightening it up and getting ready for next year's races comes next, and so it begins. In the 10 Phases of Single Speeding, number 2 on the list is the Weight Weenie:

2. Upgrade madness -- the weight weenie / blinglespeed side takes over and you suddenly develop a need to upgrade. A combination of an empty bank account, an upset significant other or a weight weenie part failure ensues. You have parts shipped to work, so the wife won't see the bike parts you ordered. You start looking for ideas (like the MTBR SS forum) to further your obsession of the perfect SS.

And so begins my adventure into the world of mountain bike weight reduction. First off is a Easton Carbon Fiber Seatpost. It replaces my FSA stem that weighs 12 oz with a seatpost that weighs 6 oz. I might not be much but it's a start. 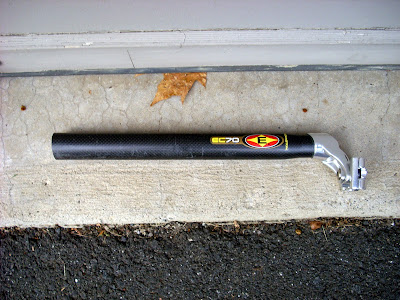 Next up are Crank Brother Egg Beater pedals. I just got these and found out that they weigh the same is the Candy pedals I thought I would replace them with. 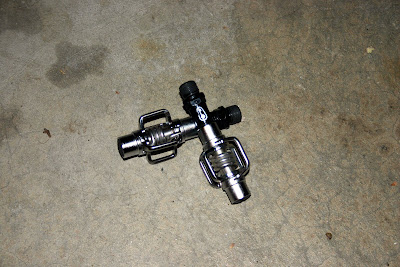 Here is the seat post mounted. It feels pretty good. 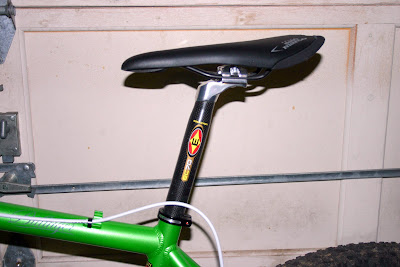 Here are the pedals. I am up in the air on whether I am going to keep them on the Dillinger. I am going to try riding with them to see what they are like. I got them off Craiglist for $20. 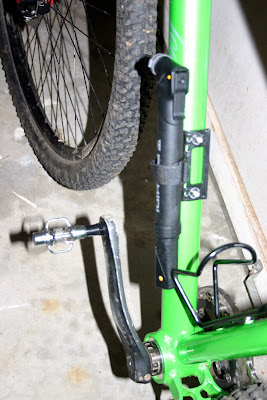 I found a better mount for the air pump. The previous one was a little too wimpy and I found a few mounts laying around in my spare parts bin so I mounted it. Nice and snug. 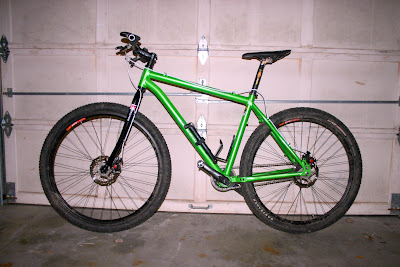 The initial build weight of the bike is 27 lbs, heavy by most Singlespeed standards, which I think is largely due to my cranks, FSA Mega-Exo SSer with bashguard, the velocity wheelset that I got with the Qball, tires and tubes. Why tubes? Well I have slime tube in the rear that weighs almost a pound in itself. The WTB 2.3 Exiwolfs and Bontrager Jones 2.2 tire probably weigh a lot more together compared to my WTB velociraptors. So, the idea is to replace everything except the saddle, headset, and frame. Might not get everything done by race day but I will try. Now the bike is 26 lbs 10 oz.
at 8:07 AM