I saw this on the CT NEMBA blog's Feedjit the other day and I had to laugh. There is no secret trail at Huntington SP in Redding. There is a trail that Paula Burton started marking and was going to call it the Chimney Trail, but then some local rapscallions came in last winter and built a trail over and through what she was trying to lay out. I have ridden the trail a few times and it's fraught with problems, like fall line climbs, no benching where benching is desperately needed, and many low spots that have since turned into mud bogs and are now in need of armoring.
So these guys who are probably really skilled riders took it upon themselves to build this Secret Trail without the land manager's approval and now who is going to do maintenance on their trail, or at least go in and fix their mistakes? I would hope the builders would at least try to take some responsibilities for their actions but seeing how they went about doing it, I strongly doubt they will make any attempt. If some other organization goes in there and does the work, I am sure there are going to be changes and reroutes, and if the builders don't like it then they should come out and clean up their mess!

If you want to build trails and you think you have a pretty good idea on how to do so, take a step back for a moment and ask yourself, do you really know what you are undertaking? Please take a trail building course, there are many organizations that put them on: IMBA, NEMBA, and AMC are all organizations with local representation that periodically put these schools on. Unless you own the property I strongly recommend you getting the land owner's approval. Especially if it's the state property like Huntington. Somebody was recently caught trail building in an area on the other side of the state was cited and had to pay a hefty fine. Sure you want to take that risk? 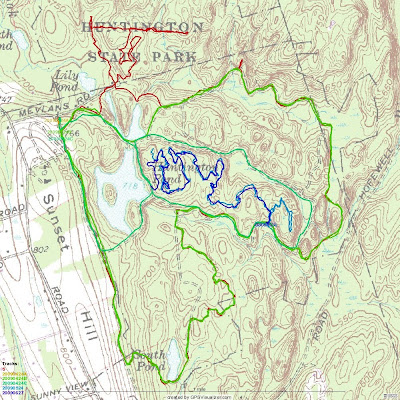 While the Chimney Trail isn't marked it was pretty easy to follow, that is during the summer. Not sure what it will be like with the leaves down because it isn't blazed but the best way to find it is to head south on the Red Trail and look for singletrack going off on an angle after you have reached the highest point on the trail. 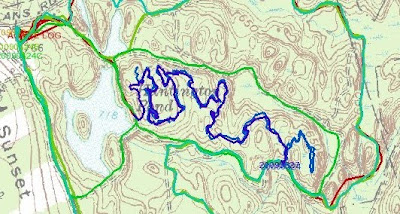 Once you are on it be prepared for a technical assault of your abilities. There are steep ups, a few up-and-overs, some rock work, and even a few pussy paths around some really sick, short technical descents. Not to mention mud holes and off camber trails on really steep slopes. The other disappointment is that it's just a linear trail and not a loop.