See more details of the ride on Garmin Connect: Roxbury Revisited.
At the last minute I bagged the Hartford 'Cross Race because I needed to do some work around the house on Sunday afternoon and instead opted to return to lower Litchfield County for another Gravel Grinder. Using MapMyRide.com and the knowledge from the Tour de Roxbury I laid out a course of 25+ miles that would take me starting in Roxbury, up through Washington, New Milford, Marble Dale, back through Washington, and back down to Roxbury Center. 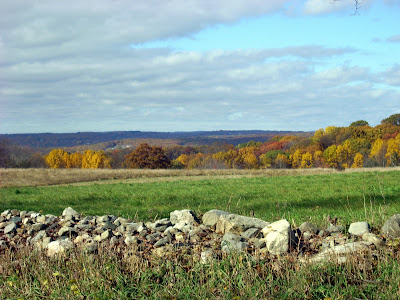 Figuring out what to wear was a challenge because I didn't want to over dress for fear of over heating and obviously I didn't want to under dress because it was a windy and cold 50 degrees this morning. In fact everything I wore was perfect except for the shoes. I had a Nike running shirt, long sleeve techwick, and a riding jersey, bibs, winter riding gloves, gore tex sock liners and wool riding socks. The only mistake I made was with my shoes. My feet were warm starting out but then there was this stream crossing on one of the singletrack sections that looked shallow but turned out to be really deep and splashing through it soaked my left foot. I probably should have worn my warmer shoes. 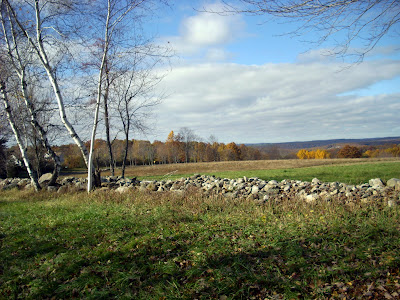 Today was a beautiful fall day and the fall foliage was once again worth seeing. On Upper County Road in Roxbury it was windy, so windy that it was bone chilling. I think the one thing that would have really helped for these temperatures would have been a wind vest. Might have to get one with sleeves that can be removed. 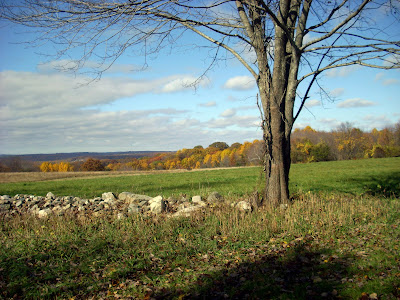 The best view is from here on Upper County Road. 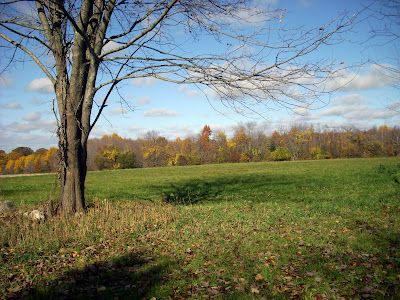 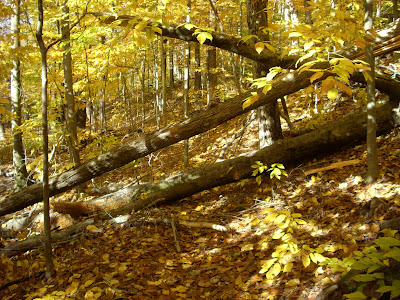 Riding through the Moosehorn tract I found this blow down that blocks the red trail completely. A big beech tree broke taking out another tree next to it. 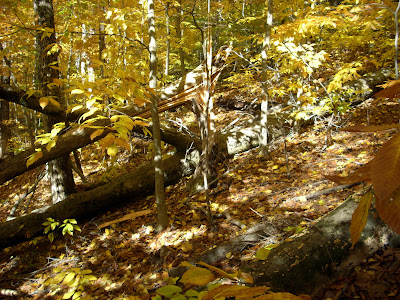 On the the other side of the brook the blue trail opens up into an old cart road. Riding through here on a full susser would be fun but I don't think there is enough trails here to make it worthwhile. 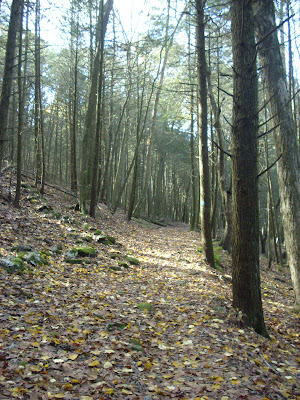 From the singletrack I came out onto route 199 and took this up to Battle Swamp. This road starts out as dirt then is paved and then dirt again. Then I tool a left onto some more single track that drops down to Judds Bridge. 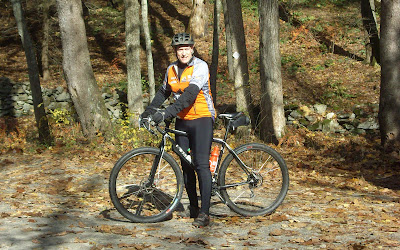 Then it was Judds Bridge to Walker Brook. Walker Brook is great section because it starts out flat and then begins a steady climb up. While on this section I came across a woman wondering where she was and told her the name of the road. Then her husband came up and I showed them were they were on the GPS.
Apparently they walked down South Fen Hill and were looking for a way back without having to turn around and go back the way they came. I told them to head up Walker Brook to West Church Hill but they were would be in for a climb as I found on the Tour de Roxbury. It was kind of weird for people asking for directions who lived nearby but after some chit chat I learned that usually lived in NYC. 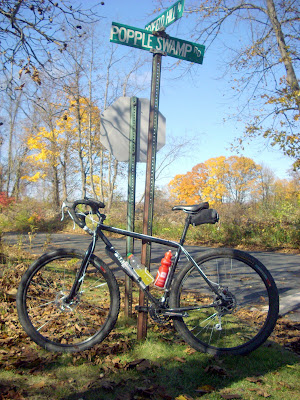 Most of the roads in the New Milford/Marble Dale section of the ride were all paved and I stopped here to warm up my left foot. Then it was a big downhill where I got up 34 mph.
Through Steep Rock I jumped on the first section of the rail trail this time and took it through the tunnel and up to the power lines and out to Tunnel Rd. From there it was back to Judds Bridge, 109, 67 and back to Roxbury Center. 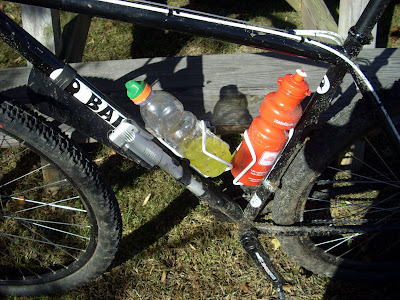 I got the most mud from Steep Rock Reservation. The down tube fender helped keep some of the mud off me but it probably should be a little further down. I don't like the new bars on the Qball when it comes to riding singletrack even though they are great every where else. I think I need to try actual cross bars because when I am riding down hill my body position is all off while trying to make sure I have at least one finger on the brakes. The only thing that makes it doable is the 29 inch tires. 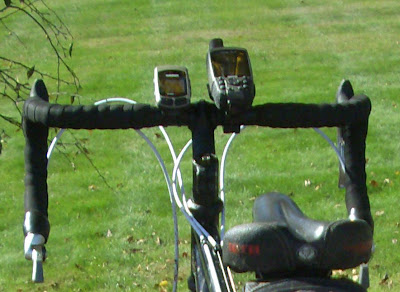 Over all the bike was great and the new stem made a big difference. I finally have this bike dialed in. I mounted another GPS with maps on the bars to help with navigation and it was a big help. 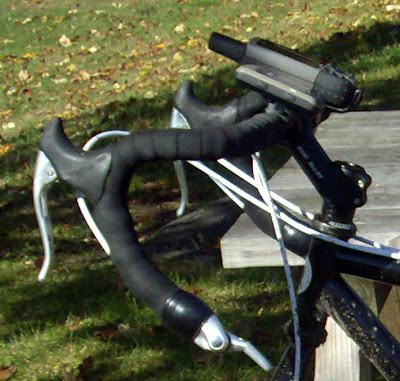