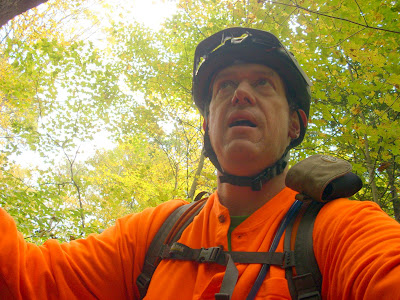 I always get nervous when I am out in the woods riding during hunting season. It's a lot different from when I was in the Army, at least if you are on point you are constantly scanning to your front and sides for the bad guys. When I am riding, I am heads down watching the trail and what I don't or won't see is someone sitting in the woods all cammied up waiting for Bambi to saunter up. That is why I call this time of year Orange Season, because unless I am riding somewhere where hunting is not allowed I am wearing blaze orange and have bells on the bike and hydration pack to announce my presence. 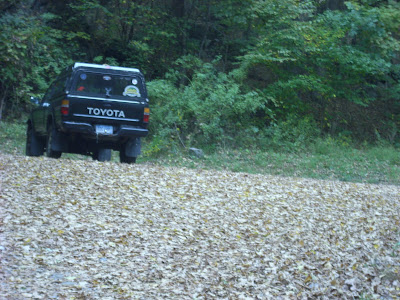 What do you get with a Toyota Pickup, deer stickers, and a huge Cabela's sticker in the back window? A hunter, of course. Even though it's bow season you never know what else they may be packing. Take for instance the target on the tree below. On closer inspection, it appears it was target practise and it had holes in it. Not sure if that was from a pellet gun or .22, but it's set up in such a way that who ever was using it for target practise must have been shooting across the trail. Real smart! 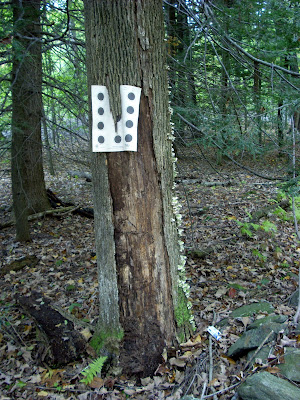 It's funny how the hunters refer to anyone who is anti-hunting ... they call them haters. I don't hate hunters because they hunt, I just don't care for the stupid things that they do, like this target and leaving it in the woods like that. That's litter my friend, and so is the empty pack of smokes you left at the base of the tree. They claim they are concerned for conservation, well why not practise what you preach. And while you are at, during shotgun season, police up your empty shells! Don't worry, I cleaned up their mess this time. I doubt this is from the regulars, though. There are a few guys that I have seen repeatedly through the season, and of course I will never forget the hunter that was taking a crap in his van! 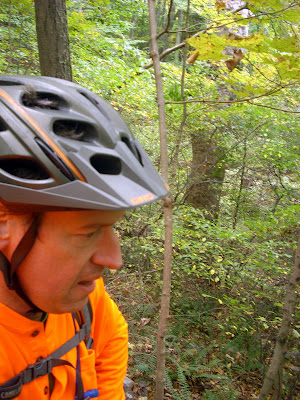 If you are going to ride on State land in CT, ensure you are wearing plenty of blaze orange!
at 5:31 AM

Ed and I saw the same pickup in the lot between 4 and 5PM today. We were wearing plenty of orange. We didn't see this hunter anywhere out there but we certainly noticed the huge Cabela's sticker.

Mark - I found your postings quite interesting as a hiker, biker, fly fisherman, and bow hunter. We all need to get along in the outdoors because there is so little of it unspoiled at this time. I was both bow hunting and riding in Huntington State Park this past weekend and found lots of issues which bothered me quite a bit. I am one of the few people who has the DEP on speed dial on his cell phone. I believe anyone who cannot follow the simple rules of trail and forest ediquette should stay home. I packed out have a backpack full of powerbar wrappers and fixed a couple of ruts from people riding through the mud who were off of any posted trails. You may agree or disagree with hunting or mountain biking. God knows as a Mountain Biker I got yelled at by a lot of hikers and horseback riders. Lets just make the forest a better place. If you see a white Ford 150 and a guy in camos, or a big guy on a 1995 aquafade Fat Chance Yo Eddy..say hello.
Chris M

Chris, are you a NEMBA member? You would make a great Trail Ambassador.

I agree with you whole heartedly. Equestriennes think that because they are atop a big mammal that can easily spook that you are supposed to kiss their fourth points of contact. Hikers just think they own the trails and both user groups think mountain bikers are interlopers, which it's the mountain biking community that's doing all the work!