Back from NYC empty handed 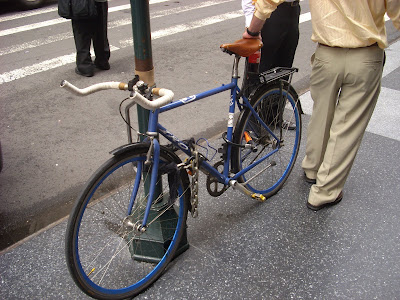 Had to work in NYC today, the mecca of East Coast fixed gear culture, and while I had the camera on hand I didn't have chance to take any pictures. In fact I barely saw the light of day unfiltered by office windows. Upon arriving at GCT I am underground until I pop out on Park Avenue and walk right into the building so on the way home with only minutes to spare to get the express back to the Park City I didn't have time to stroll down Park Avenue topside and look at bikes.
Also had hoped to get a picture of this Schwinn Three Speed that I have noticed locked up out side the Bridgeport Train Station with a very nice Brooks Saddle on it. It was there this evening, too, but given that I was late returning back from the City I didn't have time for a photo shoot. So I leave you with a picture of the Grand Central Iro Fixie that have seen on numerous occasions.
at 10:06 PM