Took the Qball out for another Monster Cross ride Wednesday morning which turned out to be a shower and mud bath all in one go. It wasn't raining when I left but the forecast said rain was imminent so I decided to risk it. I headed over to Southbury to ride the Larkin State Bridal Trail. This is an old Rail Road bed in which a large section, approximately 10 miles of the roadbed have been converted into a linear park/Bridle Trail. The rail line ran between Danbury, Waterbury and Hartford and was called The Highland Line. I wanted to see what I could ride in an hour.
Of course as soon as got to the parking lot it started to rain and it got progressively worse as time went onl. I should have brought a rear fender but I had hoped, since my seat pack is shaped like one, it would give me some protection. I was mistaken. Some other things I should have considered were rain pants and some lighter gloves, but hey it wasn't raining when I left the house.
I rode out ~36 minutes to the power lines just past the airport and then turned around and came back in about 29 minutes according to my splits. On the way out, I went around this black puddle but I found every time I tried to avoid any kind of water it just slowed me down so on the way back I just plowed through everything, including that black puddle I went around previously. Only it was deep, over the cranks deep! I plowed through it but if there was something on some part of me that was dry it was no longer. 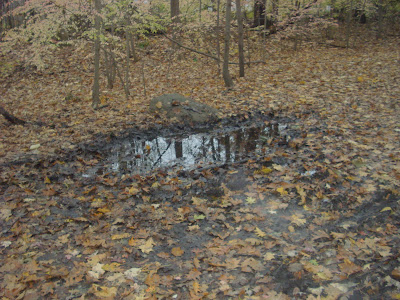