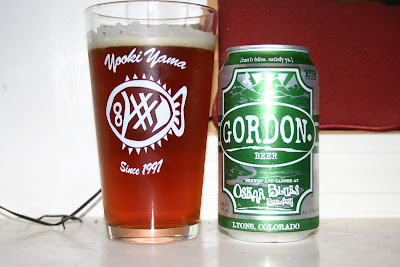 Having forsaken just all micro and other hand crafted beers for BBC I came across another beer at my favorite Packy from the same makers of Old Chub, Oskar Blues Brewery. I couldn't get over was how a can of beer could taste so good! I guess that is why on the top of the can it says [con'o bliss, satisfy ya.] OMG is this beer, and calling it beer seems insulting, because you can't compare this with a Bud or a Miller. Apparently, this brew is named after a local deceased, Colorado Beer celebrity, Gordon Knight.

When Sam Koch talks about a full bodied aroma in his beer, it pales in comparisson to Gordon's Beer. It's like a cross between the Sierra Nevada Celebration Ale and BBC's Lost Sailor. I would call it a double IPA. Similarly to Old Chub, one can of Gordon Beer packs a nice kick, 8.7% abv! I never new beer out of a can could taste this good!
Speaking of Old Chub, check out this wondrous shot of a cooler full of Old Chub and Grandma's Yellow Pils (another brand from Oskar) which I came across on a blog called Adventures of Lidarman. Nice!

You gotta try some Dale's Pale Ale. It's my favorite of those Oskar Blues offerings. The Grandma's Yella Pills isn't that good. It tastes like overpriced Narragansett.

My Dale's review is actually next Thursday. After that it will be Ten Fiddy! Great stuff these guys produce.