Here I was at Broadway and 50th, in the middle of the Theater district with my camera waiting for cyclists to come down one of NYC's venerable bike lanes in hopes of seeing (and photographing) that elusive breed of messenger wannabes, the hipster. We don't have bike lanes is Subrural-urbia, we have roads designated by the State Department of Transportation as bike routes but they are not marked so motorist won't expect to see someone riding a bike and often honk and pass within 3 feet of a cyclist. So, similar to your typical NYC tourist that might be gawking at all the electronic billboard advertising, I was stationed on the side of the road hoping to snap a few pictures of fixed gear riders. 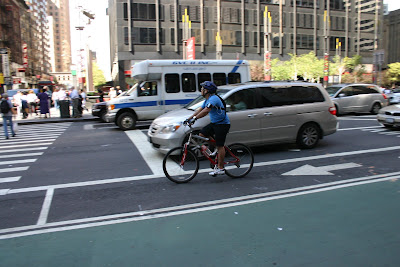 If you are a frequent reader of the blog, BikeSnobNYC, you will understand his disdain for motorists and their abuse of bike lanes in and around the City but it seems like a different environment on the weekend. Pictured above and below you have helmeted, pleasure riders in the bike lane riding both crappy and high quality bikes. 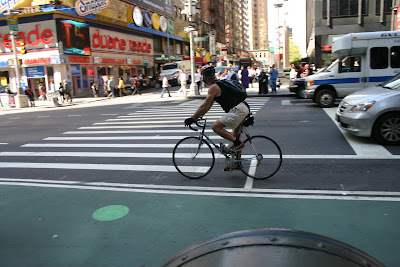 On the same street, just a little farther west, you have delivery riders who ignore the bike lane and ride with regular traffic. 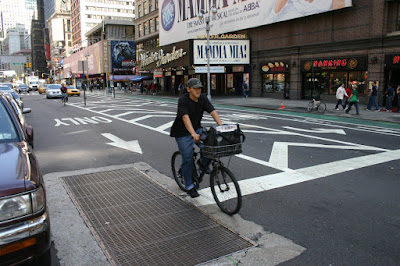 Granted, this guy doesn't look like he deliverying anything, rather, it appears he might be heading to work or heading home. 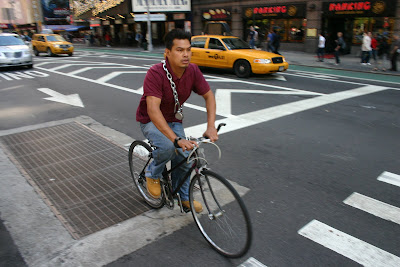 Is there a language barrier or cultural differences that preclude one group from the bike lanes?
at 6:19 AM

Hi Mark, thanks for your comment at Cyclelicious. I don't know if you saw my followup, but get yourself up to Providence, RI for Outdoor Demo East -- it starts this Thursday. I don't know for sure if Giant will be there but they probably will be. Bring business cards with your blog name and hand them out to the sales and PR people.