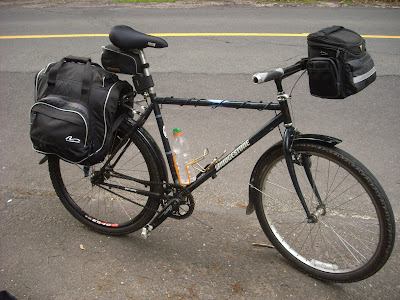 My spring commuting series was pretty few and far between largely in part due to our changed weather patterns. Is this a new affect of global warming, the New England Monsoon Season? Somebody mentioned at work that we have gotten rain for almost 25 consecutive days. Being the fair weather commuter that I am that explains the lack of commuting thus far.
Having not checked the weather forecast for Wednesday I kicked off the summer commuting series by riding the Bridgestone as a fixed gear first time yesterday. It was foggy in the morning but as I made my way up the Pond Brook River Valley it started to burn off and I was actually looking a little piece of blue sky which was really encouraging. Had a mechanical problem along the way but I was able to fix it and be off on my way.
The 'Stone felt good in it's new configuration with a longer stem and flat bars. Before I had a comfort stem and riser bars which had me sitting more upright but now that I think about it, I don't think it was an optimal position for getting the most power for a climb. 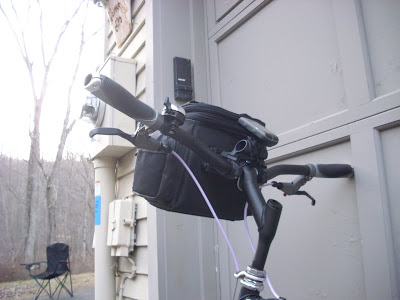 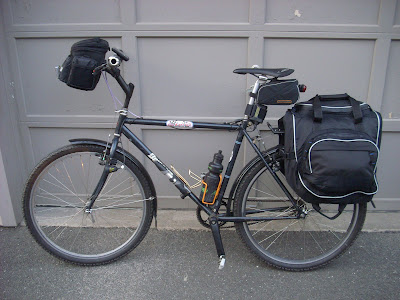 Spring riding configuration
The configuration above was for the single speed with two hand brakes but I have come to realize that the comfort bike position is not for me. The flat bar, thrust forwards puts me in a position where I feel like I have a lot of power.

As I elluded to earlier, the New England Monsoon Season is still in effect and after checking the weather forecast at 4:45 PM when a fellow rider and sometimes bike commuter said that I better get on the road lest I want to ride home in the rain. I did a quick superman in the office and got out on the road in 10 minutes. There were dark clouds over the section of Danbury that I was in already but no thunder as of yet.
I opted not to take a distance route and just the shortest way home because I didn't want to taint my fair weather commuter status. I was prepared though, I had my rain jacket and pants in an outer pocket in the panier. Still don't have a shower cap for the helmet but do you really need one? I am already sweating profusely so if my head gets wet, who cares? As for shoes and gloves, just going to have to take it like a man.
Actually got home with probably an hour to spare. Relaxing at the BBQ drinking a PBR is when the skies got really dark and thunder loomed in the distance. By the time I sat down to dinner with the family did the Monsoon strike in full force. We'll see what happens tomorrow but the rain threw off my plans for an early RBW at Upper Paugussett.
at 6:29 AM