Commuter Bikes in the Park City 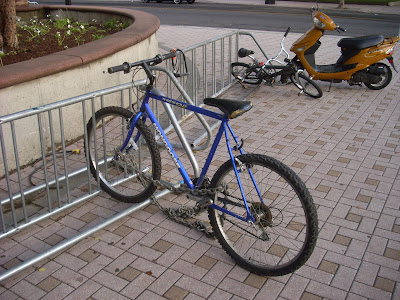 Had to go to NYC for work on Friday and decided to try commuting from Bridgeport, CT (aka The Park City). Door to Door it's two hours max but can be less and there is a plethora of trains between Bridgeport and NYC. As opposed to Danbury, there are four trains in and five trains back, and door to door is two and half hours +. Travel time between Brideport and Grand Central Terminal varies between an hour and ten to an hour in thirty. Not to mention, I needed to be Hamden after work for a party. Probably do this more often, and if I plan it right I might be able to hit Trumbull for a little riding on my way home.

I was pleasantly surprised to see some commuter bikes locked up at the bike rack by the station but the quality of bike is typical for the area. Lots of cheapo, big box store, faux mountain bike styles. Alothough most of these appear to be cheapo bikes some finer details stick out that tell me that the riders use them often for commuting probably more often than not. Take the Diamond Back Topanga below. If you look closely, the rider of this bike has his (or her) fecal matter in order. Some details stand out like NYC style lockup, fenders, and looks like an upgraded drive train. 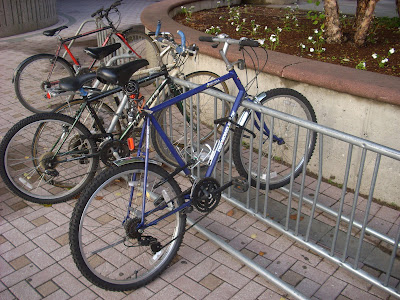 This Raleigh Sprite is impressive in it's own right because it's a mid-1970s touring bike and judging from some of the components I think it might be a model DL95 (ten speed) but it doesn't look like it hails from '76 or '77 according Sheldon's page on Retro Raleighs because of the color. I just love those classic aluminum pie plates and the pinned 160 mm cranks. If it was a later model it should have also had a Brooks Saddle and all the Sprites had fenders. 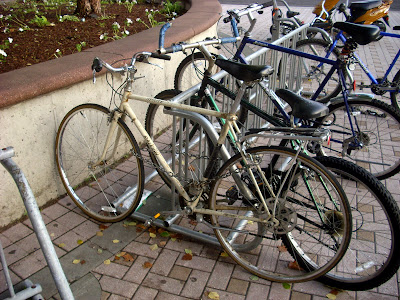 Although this Schwin, below, isn't what I would consider a quality bike, the rider appears to be a seasoned bike commuter due to presence of fenders. I think anyone who goes to the extent of adding fenders to a bike is someone who depends on this bike to get him (or her) to where they need to be in all conditions. 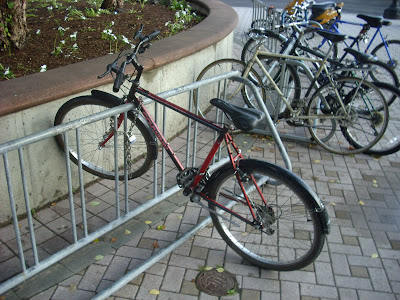 Of course, if anyone rode fixed gear as a commuter west of the Housitonic, then I would be really impressed but so far, I think I might be the only one.
at 7:58 AM