On Thursday's RbW I found some additional blowdowns that weren't there on Tuesday.  Funny because I don't remember it being windy Tuesday afternoon or Wednesday.  None-the-less, the Gussy Trail was blocked at the end of the ROW just past the intersection with the blue trail (that comes up from the Echo Valley Parking Lot) and I know if I didn't get to it a massive go around would have formed and that wouldn't have been good.  There was also another tree down after you make the dog leg and go through the second rock store (stone wall). 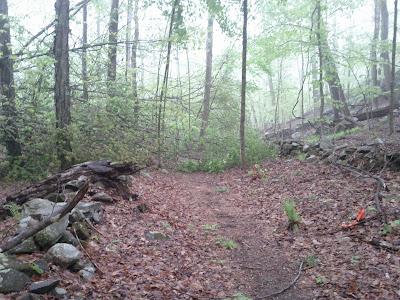 It had rained the night before but the weather was holding so I headed out around noon.  I didn't have a lot of time because I needed to be back by 1 PM but I wanted to get a good ride in, too, so I started pushing and found I had no legs after Friday's commute. 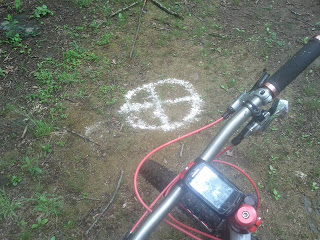 Looks like the The Drinking Club with a Running Problem is visiting Upper Paugussett this weekend.  This is not made by an alien, rather the Hare setting the running course.  It means you have to check the routes from this point.  Checks are put at intersections to make the FRBs (Front Running Bastards) run extra looking for the true trail.  Clearly the Hare was taking the pack down the Mulikin Trail because there was check back sign at the intersection with the Gussy and they were staying off the Gussy Trail completely. 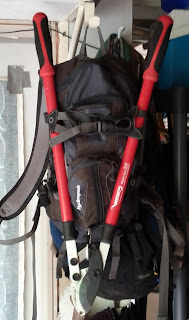 I found a way to carry my big loppers on my hydration pack and they made short work of the tree blocking the trail further down the trail and also helped with clearing the blockage at the end of the ROW. 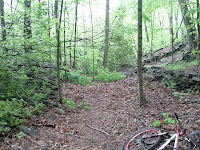 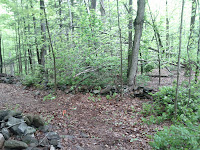 I still needed to use my handsaw for two larger branches. 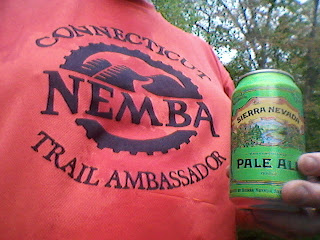