"We May Die, but Never Will Surrender" 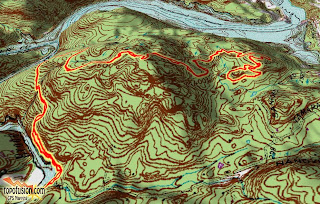 Does anyone know what Cinco de Mayo is all about or do we celebrate this day because a Mexican beer has turned it into a reason to drink more of their beer?  Ironically, it has huge significance for another country and a famous military organization:  Légion étrangère, but it seems a lot of that is lost in commercialism.  Well, I wasn't yelling Camerone while riding today but the way I was feeling, maybe I should have been. 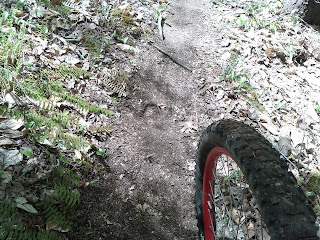 Well, before I cracked open a beer today, I headed out to Upper Paugussett to check on the trail conditions seeing that I hadn't been on the trails for almost a month and I don't think I have ridden the Mulikin Trail at all this year.  Found some hoof prints on the Mulikin, which is a good sign because the Equestriennes are always complaining about going up the Poly Brody is too hard on their horses hooves.  The Mulikin makes a great alternative and I am surprised there are more tracks. 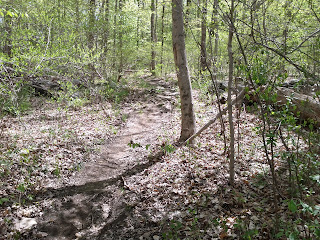 Looks like some trail gnomes have been tweaking the trail.  It definitely looks like it's getting a lot of use by the way it looks ridden in.  I fear when I get around to building the new reroute it will be hard closing this section of the trail.  Of course, what I have planned might just draw everyone's attention from the old trail to the new trail. 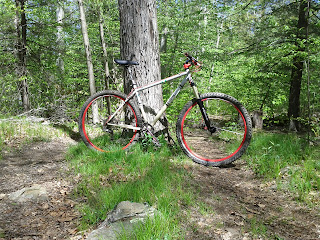 This is the first time on Spot in about two months and I am finally riding the new Alex wheelset in Pimp Red. The only think I might add at some later point is a red saddle but I like the plush Terry saddle that I have on the bike right now. 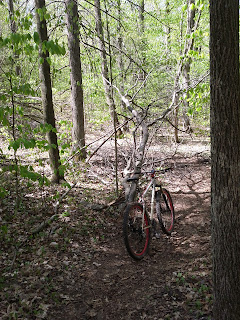 There are some new blow downs on the Gussy.  The one pictured above occurred right where I took care of another one post Hurricane Sandy.  A route around it has already formed but the tips of the branches still stick out into the trail and need to be taken care of. 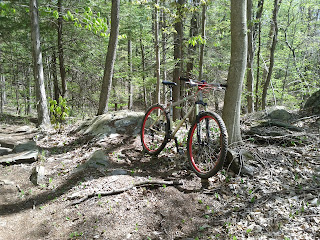 Since everything was clicking for me today and I was padded up, I first hit the log ride short before the Sandy Reroute and then this little roller and I found that it's really smooth.  Didn't stop to pull the chain out of the ground but might do that later in the week when I come back to do a little TM.  I did notice that someone moved the rocks that I had previously used to try to armor the last turn on the Sandy Reroute.  I admit that it was a rush job and the rock store wasn't selling any good flatties.  Granted, it's so dry right now that it doesn't really matter.  We'll see if that changes in the fall. 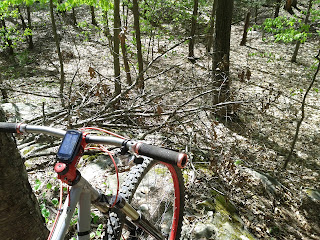 The 3 Bears roller also took a hit with three real big branches down on top of all three rollers.  Someone created a new roller just to the right of Papa Bear but I wasn't comfortable with the run out so I didn't try it.  Looks like I will be coming back Monday to do some Trail Maintenance. 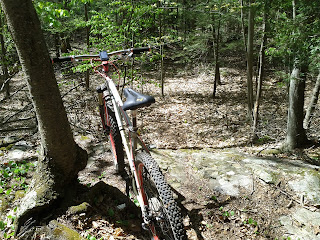 Just down from the 3 Bears I met another rider by name of Keith from Southbury.  Looked like he was riding with his son.  He said he loves the trail and thinks that more people aren't riding it because of all the climbing, according to Strava I climbed 1000 feet.  Not bad when you think about it, riding up the Mulikin to the Gussy, down and back is a 6 mile ride.  It will get even better, and longer, with the new reroute I have planned.
at 10:44 PM