Tune up Ride for the Cannondale XS800

After the Wednesday's 41 mile commute I noticed that the rear derailleur wasn't working well and my barend shifters were loose.  Tune up time!  My rear derailleur shifter cable was frayed and that had to be replaced, which meant taking off the bar tape.  I started to do so and then I noticed it was ripping.  I ended up removing it all.  So I fixed the rear derailleur, in fact it's working better now then it was before. 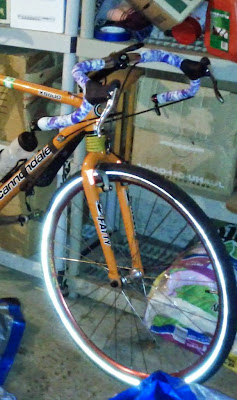 Then I decided I wanted to put the Cane Creek levers back on the Qball and use my Tektro levers on the Cannondale.  So I replaced the brake cables as well.  The only tape I had was red/white/black and purple and white.  I went with the purple. 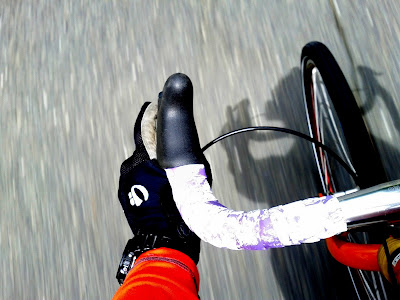 The Tektro lever hoods are a half an inch winder than the Cane Creek hoods and they feel a lot better and that's what's key because I think I will be spending a lot more time on the Cannondale. 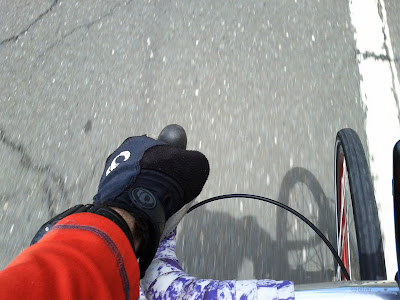 I procrastinated all morning (played a lot of minecraft) before hitting the road and that gave me only an hour to ride so I picked around a twelve mile route to try and it turned out to be great workout.  I even KOM'ed on a segment (Papoose Hill Rd) that I never knew was right near my house and I probably could have done better had I not waffled a bit before trying to hit it.  However, the segment actually starts further back down Hanover Road, at the bottom of the hill, before you even get to Papoose.  That was a pleasant surprise. 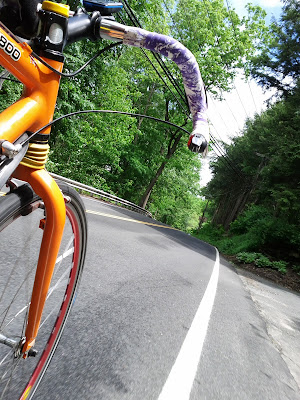 Looped around Fairfield Hills and then through Sandy Hook and down to Walnut Tree Hill.  While on Walnut Tree I noticed there was someone up ahead of me so pushed myself to catch up to him and finally caught up to him when we both turned onto Albert's Hill.  I guess he was riding on one of the Bethel Cycle club rides - these guys do some really big rides, like to Lake Waramug from Bethel as one example.  You see them all the time in this area.  On the first climb on Albert's Hill the guy got a cramp in his leg and had to slow down so I took off.


Bike performed beautifully, maybe even better than before.  This road riding thing could get addicting.  I think it's been 2 weeks since I have been on the mountain bike.