Roxbury Randonee: If it ain't raining, it ain't training

The weather channel said that it was supposed to rain Sunday afternoon, not Sunday morning!  Since it didn't look like it was going to let up I headed over to Roxbury Market at 11:00 am and set out in a light drizzle.  Riding towards Judd's Bridge is when I realized that I should have brought my rear fender because the spray was shooting right up my back!  Costume-wise, I did pretty good again, wearing a light long sleeve, short sleeve pocket jersey and a riding jacket with bib shorts.  Never got too warm. 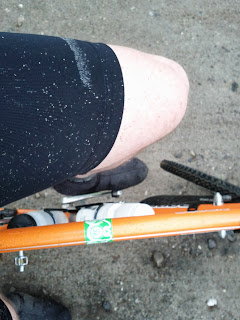 I decided to ride to the end of Walker Brook because it's a slow and steady climb and then hook around to Route 47.  I need to get better maps for the Garmin because the 24K topo maps are impossible to see in the mapping window on the Edge800.  I took 47 down to the entrance of Steep Rock Association's Hidden Valley Preserve.  Riding through the parking area the only trail I saw started out as a railroad bed but quickly narrowed which through me off a bit but I figured there must have been a few land slides that filled in a bit.  Later, I figured out that I wasn't supposed to be on this this section. 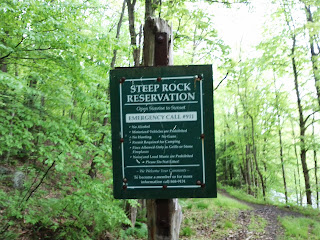 There is a sign at the end of the Steep Rock property saying it's private but clearly the trail is getting some use after this end point. 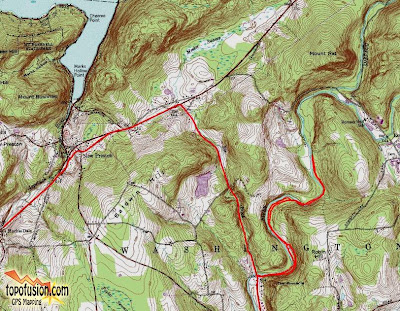 The topo map shows that it keeps going, too, so I wonder who is doing what?  There is a school at the other end of the trail and wonder if their cross country team is using it.

It looked a lot worse off then I was willing to risk given the current weather conditions but maybe later in the summer it would be worth a looksee.  It would be really cool if you could ride this all the way to Litchfield.   I am still on the fence, though, about a carrying solution for camera, cell phone, and other items that like to have in an easily accessible.  I have been looking at small, top tube saddle bags as a possible solution since my Timbukt2 top tube bag doesn't fit with the increased headtube of the Cannondale.  My only fear is whether my knees will bump the bags if I am climbing out of the saddle.  Guess I will have to get one and see how it works.  The other option would be to get a triangle bag made for the front of the triangle.  I have one for the back but it's not easy to pull things out of. 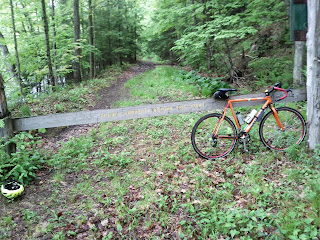 The Cannondale performed beautifully even on some of the sections that were basically single track trails.  Having 1" of travel upfront was perfect for this kind of riding as I thought it would be.  I am soooo happy with this bike. 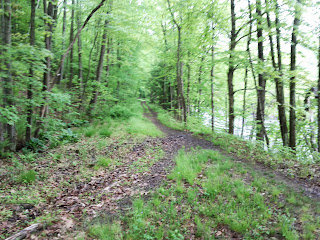 On the way back I, I found the trail that I was supposed to ride and it starts on the other side of the parking lot.  It has some nice climbing on it that makes the route that I took worthwhile.  Just want to see what lies beyond this point some time.  From Hidden Valley I rode down through the town of Washington, CT over to the main part of the Steep Rock Reservation and rode the old Shepaug Railroad bed to the Tunnel. 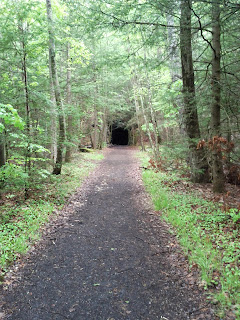 I love riding through this tunnel because when you enter it from the north there is a bend in it so you can't see light from the other side until you are about 25 yards into the tunnel and it's properly pitch black. 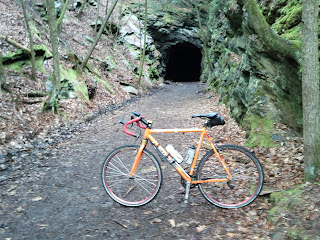 Down the trail someone opened up the log jam of blowdowns that has blocked the old railroad bed for years so I tried it out. It's a little squirrely going under the power lines but then it smooths out to the old railroad bed again.  I went down it hopping to find something that cut up to Judd's Bridge but there wasn't any connector trail so I turned around and headed back. 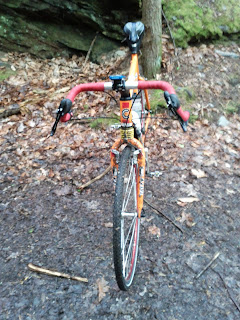 This was an awesome ride and the next time I do it I will try to work in the Rail Trail that starts at Botsford Hill and goes down to Minor Bridge.  That additional loop could add another 6 to 10 miles on to the ride.
at 7:00 AM