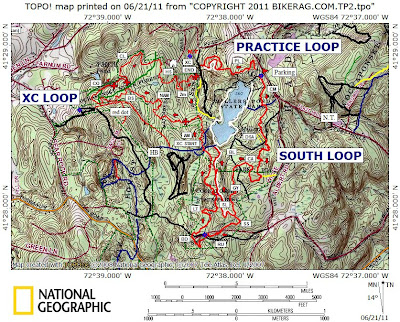 Jon Petersen of Bikerag.com fame posted on the CT NEMBA Facebook page on Tuesday that if we (CT NEMBA) were going to ride Millers to stay of the XC Loop because it was too muddy.  I always equated what he calls the Practice Loop with the XC Loop and what I called the Practice Loop was that you rode down along the eastern edge of the pond and then did a nice fall line climb to intersect with the Red Trail.  In the map above it is the trails around the "DSA" (Double Secret Agent) section on the map.  His other recommendation was to ride everything clockwise except for the Practice Loop. 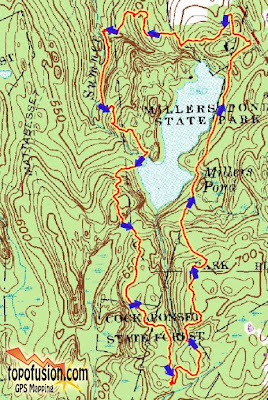 I guess you could say we heeded Jon's directions well at first but by taking the Practice Loop counter clockwise but then arriving on the bail out to the access road is when our folly began.  Instead riding back the other way we ended up riding the South Loop counter clockwise, counter to Jon's advice and it turned into a Death March:

death march n. a ride that turns into an investigation of your endurance limit. "The bridge was out, and I had to go all the way back the way I came. So the morning's nice, easy ride turned into a Bataan death march."

Looking at Jon's Map, what we should have done was ride back towards the parking lot and then rode Combo Meal (CM), which is the start of the South Loop into Crack Attack (CA) and then if time was not permitting, after all also on the agenda yesterday evening was our regularly schedule CT NEMBA Board Meeting, Beer, and Pizza, we could have bailed out on Bee Line (BL).


None-the-less, it was a great ride with good people, a fantastic workout, and got to meet somebody new, Jack who is off next week for Military Training.  Al recently went back to little boy wheels and wasn't liking the bike decision for the technical riding which Millers is known for.  In fact this was the first CT NEMBA ride where little boy wheels outnumbered big boy wheels.  After riding at Huntington last weekend on not one but two different geared bikes I found that I think I would have liked to have gears for this ride, too!  Hopefully, my buddy out east can fix the derailleur cage on the Dillinger and I will have a bike more suited for riding Millers the next time! 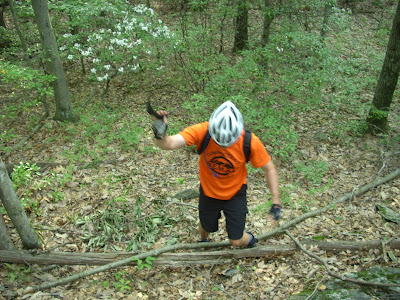 On one particular rock outcropping we stopped so that Glenn could look for his visor that he lost riding through this section last November and unbelievably he found it!  Glenn is a machine, riding a heavy Monocog rigid on this stuff and cleaning most of it! 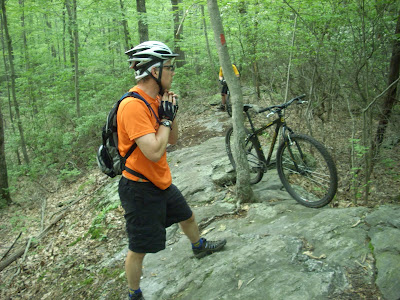