When ever I go to bed really early, like I did Wednesday night at 9 PM helped I am sure by the Bomber of BBC's MaiBock I wake up really early the next day.  I was up at 3:30 AM this morning so I got caught up on all the blogging that I wanted to get done the night before.  At 5:30, I laid back down and was almost asleep when my daughter needed help switching the shower head at 6:00 AM.  Ten minutes later my son came in saying there was a problem with the TV and he couldn't play Wii.  Now, I am wide awake, it's 6:15 AM, and I decide to ride to work afterall. 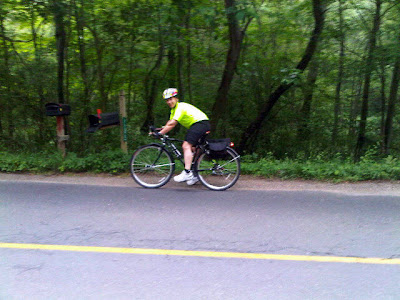 Chris had mentioned at work on Monday that he would be commuting to work on Thursday and that he leaves his house usually at 5:30 which means he rolls by my driveway, literally his half way point and hour later.  Today, he got a late start, as well I did and as I was sending out a Tweet he rolled by.  I pulled out and followed.  It was fun to have someone to talk to at various points of the ride.  I showed him some different ways through the Newtown/Bethel/Stony Hill part that we have to ride through in order to get to the office and he showed me some different ways that I have never considered before. 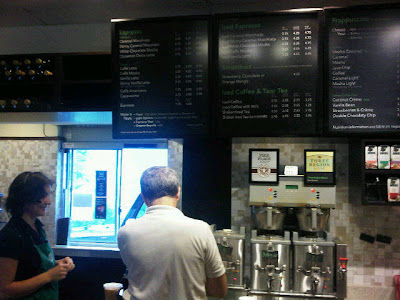 Three quarters of the way, he hit the Starbucks at the Stony Hill Big Y Plaza for a coffee and some additional conversation about bikes.  Chris rides a rally sweet Ralleye Touring bike with barcons, pleather bar tape and plenty of light.  He also added a Brooks Saddle and panniers.  It's a sweet bike.  I chose the Stinson because we were riding Pond Brook (dirt) and I am still scarred to death of riding the Lambert with it's 23cs on dirt and gravel.  Turns out the Bottom Bracket was bent which was giving me the chain dropping problems.  The bike rides so smoothly now. 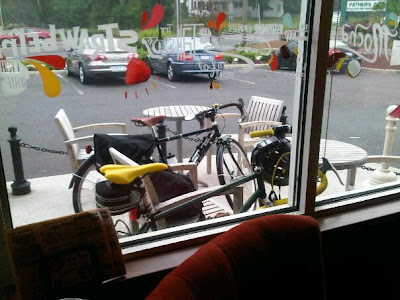 The route, including the stop at Starbucks was a little shy of my 10 mile minimum because for each commute I was to have at least 20 miles round trip so I took a longer way home after work but didn't stop for any pictures so I made really good time, 45 minutes to ride 11.5 miles, fixed!
at 10:55 PM

I hope I didn't slow you down too much!

No way Chris. It was fun to have someone to ride with for once.