After Sunday morning's walk of shame in the Pequonnock River Valley I still had enough time for a little fixed gear jaunt around town on the Lambert.  I kept my mountain biking kit on and headed out on some exploratory roads trying to find what would be a good 20 mile loop but as you can see from my map I didn't find it.
I like heading out on Sugar Street but looping back on Sugar Lane, while it was a nice ride, the intersection back onto Sugar Street isn't really good - no flow.  Maybe next time I ride it up and come back on Sugar Street.  I did a loop on the Rec Trail but there were too many dog and baby walkers crowding the trail.  Need a bell.  Riding down to Sandy Hook Center was fun and smooth.  Then I went to Church, that is riding up Church Hill Road.  Great climb!  Then it was back on the Boulevard, stopped at Rick's house for a little chit chat and then back to the start point.  Next time, I am going to ride down Rt 25 and then come back on Toddy Hill.

There were lots of roadies out.  It seems Hanover Road is frequented by many that must be doing a Bridgewater, Southbury, Newtown loop.  Was it my garish outfit or perhaps the fact that I was JRA (just riding along) all the same stuff they were, but fixed, and there were no waves of roadie solidarity or acknowledgement. 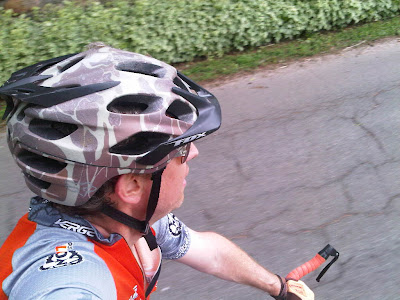 What a joy it was to be riding unencumbered.  I really enjoy riding the Death Fork to work but riding it without a pack is so much better!  It just hums between my legs and the big crank upfront gives me much more control on the descents. 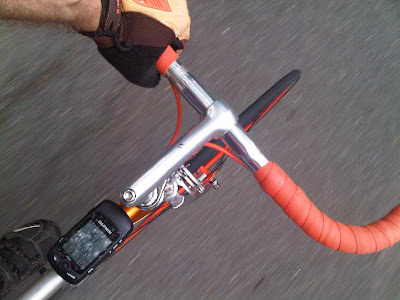 As you can see can see I decided to go a little a retro in the seating arrangements on the bike.  I took the Brooks Racer Saddle off the Qball and put it on the Lambert because I had one of these old leather tool cases from a another bike that is the perfect size for a tube, multitool, and a small 15mm wrench.  The only thing I don't like about it is that it flops around back there.  The buckles are old and rusty so trying to tighten it up is difficult.  It works for now but I will probably replace it with a an orange (of course) Timbuktu seat bag. In the meantime, I am really enjoying the bike. 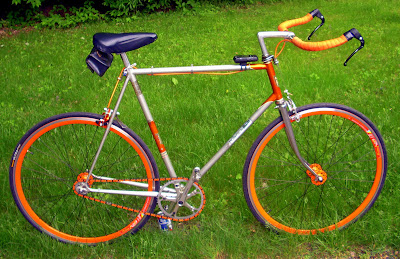 This summer I might try to do a loop around Manhattan.  Take the train in from Sono or Southeast ride from Grand Central to the East Side, go around the Island, maybe ride the GWB and then back to GCT and home!
at 11:13 AM

I have an idea. Don't know if its 20 miles. What if you headed down the Blvd and I joined you from there. We head out and take a right on Church Hill, left on Queen, left on Mile High, then all the way down and left on 34. Go into Sandy Hook town center and take a left on Church. All the way up then over Main onto West then onto Castle Hill for the killer climb. Then left on Ashford Lane, right on Cobblestone and left on Scudder for the fast and flowy descent to 302. Left on 302 then left on Main, right on Schoolhouse and part ways at the corner of Schoolhouse and the Blvd.