The road to hell is paved with good intentions 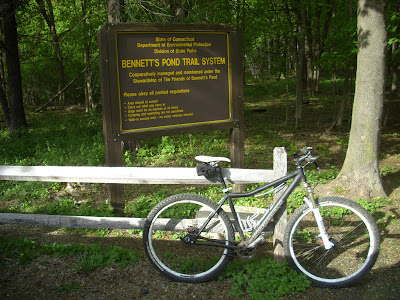 I was supposed to ride to work today but found I had a meeting down in Norwalk that I had to attend in person and it dawned on my that I haven't been riding at Bennetts in quite some time.  In fact, last time I rode here was in June 2009!  Having lived in Ridgefield at the time this land was acquired it was my go to place for running and XC skiing, that is before I discovered mountain biking.  I love riding here because it has everything from buff to techy as all get out singletrack.  Awesome climbs and wicked descents.  You can get 20 miles out this place if you hit all the trails and you don't have to do a lot of repeats, either. 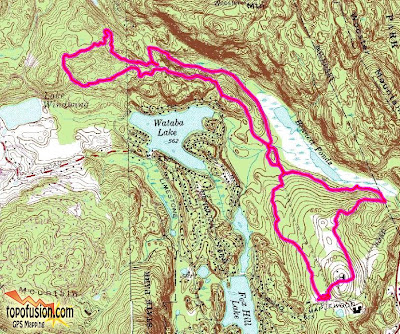 As I was getting ready this dude pulled up dressed all business casual and all.  I said hello with barely an acknowledgement as he headed down the Nursery Trail lost in thought.  It was kind of weird because he was really dressed for a hike and there are sections on that trail that can be a little greasy.  Who knows what he was out to do but his car was gone by the time I got back.
Starting from the parking lot, it's business as usual, ride up to where the old Fox Hill Inn used to be and marvel at the magnificent view of the Bethel and Redding Hills.  Then down the green trail  which looks like someone finally cut back all the thorn bushes that were encroaching onto the trail.  Of course, they could use some cutting back again but it's still passable.  Then it's on to the pond trail, which is still part of the green trail.  There were also Ives Trail markers so I guess this means it was finally extended over to the south side of the park finally.
Then down to the Pond Trail.  The views along the pond are always amazing and it's incredible and it always amazes me how beautiful this place truly is and I am thankful that I can experience it knowing that it was saved from becoming a golf course. 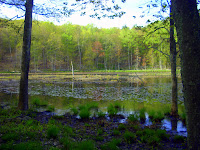 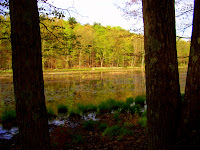 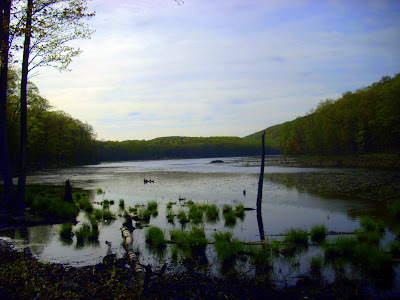 After crossing over the head waters of the West Branch of Saugatuck River, I made my way up the unmarked trail that follows the ridge line and eventually turns into the purple trail.  Eventually, the property changes from State of Connecticut to Ridgefield Openspace's Hemlock Hills section and the trail markers turn to blazes.  The purple trail becomes the red trail and it's a great trail to ride.  If you want technical, this is the trail for you.  Rather than ride down to the lake there is a short cut trail that cuts over to the blue trail.

I think I had heard that there was a new trail here last year but didn't really know where it was but I think I found it on Friday afternoon.  This new trail is a great edition to the trail network because it allows you to bypass the swamp that you end up having to ride through if you were to continue on up the blue trail from this intersection.  For the most part, it is a well thought out trail that is both flowy and curvy and always keeps you on your toes.
While I appreciate the intention of the connection to the yellow trail I would have provided a cut back around this section because the yellow trail route back to the red trail is not a mountain biking trail.  It's more of a goat path along the side of a hill.  Continue that flowy and curvy trail this would be a real blast to rip through.  Maybe there was something there and I just missed it.  I saw would could have been a trail but by this time I concerned about heading home since I was in sort unfamiliar territory.  I definitely want to try and ride it from the other direction to see if there was something that missed.
at 8:33 PM