A Recumbent Commuter in the Area! 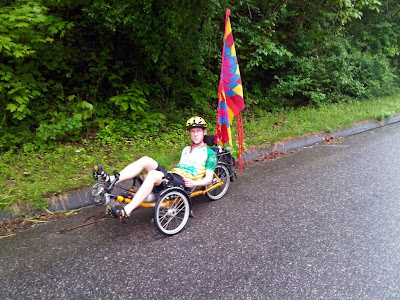 I was sitting at the Hawelyville Post Office waiting for it to open on Tuesday morning when I saw a recumbent go rolling up Barnabas Rd and being the bike geek that I am and I had a few minutes to kill I jumped back into my car and chased after the rider.  I didn't catch his name but he told me that he rides to work every day from Bethel to Newtown and that he builds these trikes on the side.  I think he said the trike is from Greensport..  Got to hand it to him, riding a recumbent on our roads is pretty crazy. 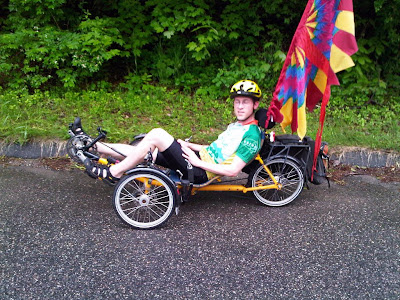 The bike has 16" wheels with disc brakes on the front wheels.  Didn't seem like a safe design having to independently controlled disc brakes on the front wheels, and he had hydro to boot.  I would have have cable brakes controlled by one hand and rear drum brake.  Obviously you need a big flag such as what he is rolling with but I think I would have pole coming up from the back sporting a multitude of flashers and/or binkys on top of some flag.  Still, really cool.
at 6:35 AM