OK, let's try this again!  I think I got it right this time so I took off on the Lambert again and had one of the best commutes of my life.  It was a bit on the chilly side and I was in tights and riding jacket but I could have had an ear band on, too.  It was 43 degrees when I left the house. 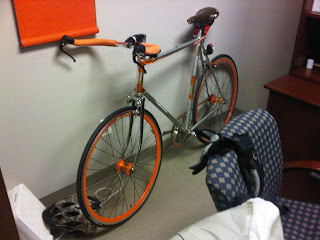 The Lambert was silent but deadly.  The 52:17 gear ratio is a bit much for Southern New England hills but I figure it will just make me stronger but it's the 23c tires that were really impressive.  I had them pumped to 90 psi and they just hummed along on the road.  The bike is really fast and I was able to climb most hills seated. 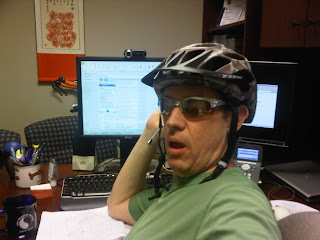 Who has a conference call at 3:30 PM on a Friday?  Someone on my team did but I was ready to pop smoke none-the-less as soon as the call was over.  It was a surprise leaving the office because it was actually sprinkling out.  I had to go back in and get a Fedex envelope for my laptop because I didn't want to take any chances getting it wet. 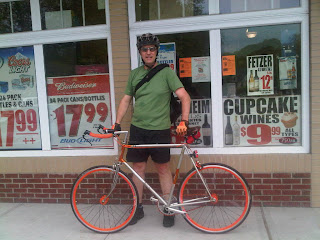 Now that it's warm out, it wouldn't be a good fixed gear commute without a beer stop at the Hawleyville Packy.  An ice cold PBR Tall Boy to quench my thirst and prepare me of all the climbing the rest of the way home.  I am a chicken shit when it comes riding such skinny rubber in dirt so my new route home takes me along the highway over to Tunnel Road and then on to Currituck.  I might try riding down to the other end of Currituck and going that way next time.  This bike is such a joy to ride
at 9:22 PM