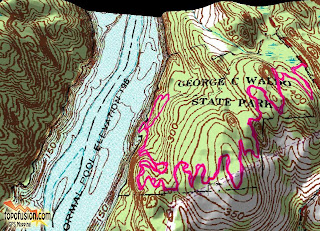 Rick was the only taker for my official CT NEMBA Saturday Morning Eye Opener ride in which people with little time to themselves because of honey dew lists, errands, and kid's activities meet at a local riding spot for an early morning ride.  Rick lives down the road so we met in front of his driveway and he followed me down to George C Waldo State Park in Southbury.  Waldo is a unique and little state park that had a fire road down to the Lake and one little trail that leads to a meadow on someone else's property that the local hunters use.  A local Newtown resident and member of New England Mountain Bike Association, Paula Burton, built some awesome single track there a couple of years ago and continues to improve the trail. 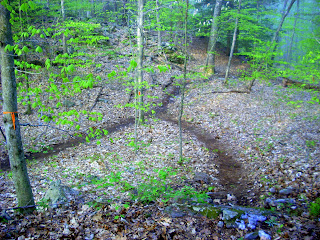 At first I thought the trail gnomes had done some blowing, however, we met Paula on our way out and she told us she was doing work last night with a back pack blower and that's why the trail was blown clean in this one section where there is a new roller. 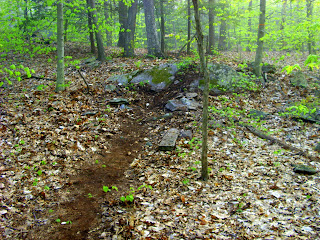 The roller seemed more like a drop and seemed to be lacking a good tranny.  Rick and I QM'ed the feature but didn't feel up to it.  There are some good rocks there that could be used to ramp the bottom section but we only had two hours to ride and didn't have time to play. 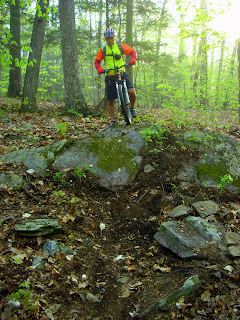 The fog in the Housatonic River Valley was just starting to lift as we were descending down into the valley. 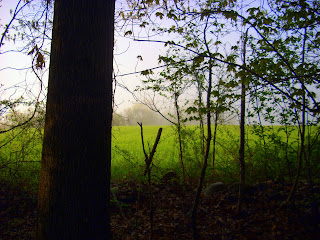 At the bottom of the trail, near the river we came across at tent.  What was funny was that there was no boat tied up on the shore and no car at the car park where we parked.  The fire pit was still hot so I rode up to the tent and asked if anyone was in there.  The occupant in the tent answered my question that he walked in.  I reminded him that camping here was illegal and left it at that.  I wonder if this is the same guy who has been camping at Upper Paugussett State Forest? 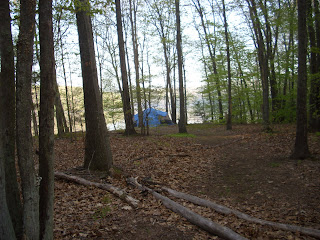 After the encounter with the camper, Rick and I rode up the access road until we found the other trail that Paula built that brought us back to the end of the Waldo and we rode back up the trail. 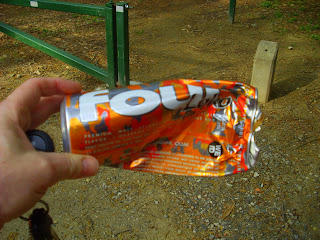 Picked this up in the parking lot as trash.  It's called Four Loco and you have to be pretty crazy to drink one of these!  Basically, it's 4 red bulls and a bottle of wine, 12% Alcohol by Volume.
at 8:43 PM