After getting the diSSent set up with new shoes, WTB Exiwolf 2.3s upfront and Nanoraptors in the rear, a Facebook friend said to ditch the Exiwolf because it's really a western tire and not made for New England Singletrack but I had to see for myself.  In fact, a later recommendation from someone else said to ditch the Nanoraptors, too.  Well, it became evident in the Big Burn on the second up, a technical ascent and that I immediately lost traction on.
If that first incident wasn't telling on the single track that cuts over to the blue trail from the big burn I lost traction again, stalled out and went down scraping my knee.  Then a little bit later, off the blue trail, headed towards the Mica mines on a trail that I never tried before my front tire slipped in the leaves and I went down.  This time hitting my knee on a rock.  Great!  Day before a race and now I will have a sore knee. 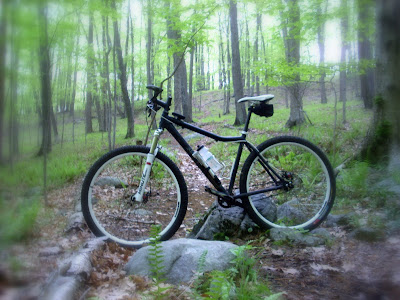 Despite the knee I still managed to have a great ride and rode 8.5 miles.  Everything is working great on the bike and I love riding it. 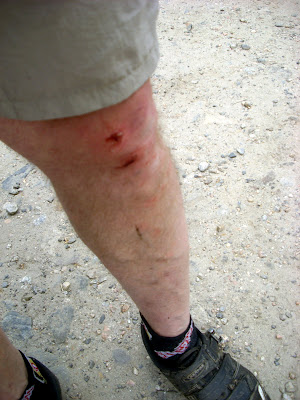 Later during the day, I put the Rampage back on in the front and a Maxxis Ignitor in the rear.  We'll see how that does at Winny Woods on Sunday.
at 1:04 AM