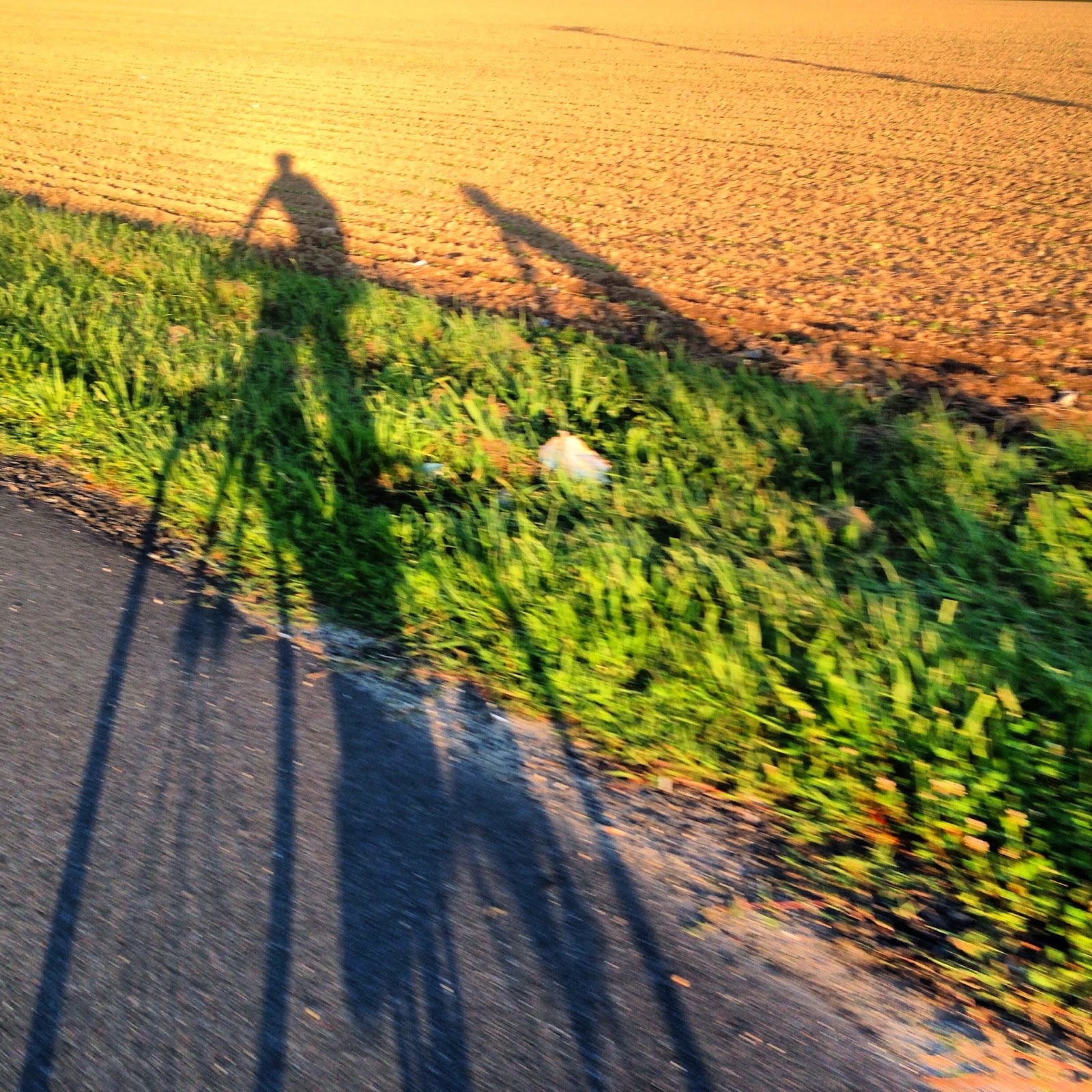 After Thursday's weather which was rainy in the morning and mostly overcast in the rest of the day, Friday was spectacular!  Will and I planned the last 50 mile ride of the vacation to ride out to Georgetown, DE and then up through Redden State Forest (fingers were crossed that the road went through or wasn't dirt), then back through Milton, and returning to the vacation house. 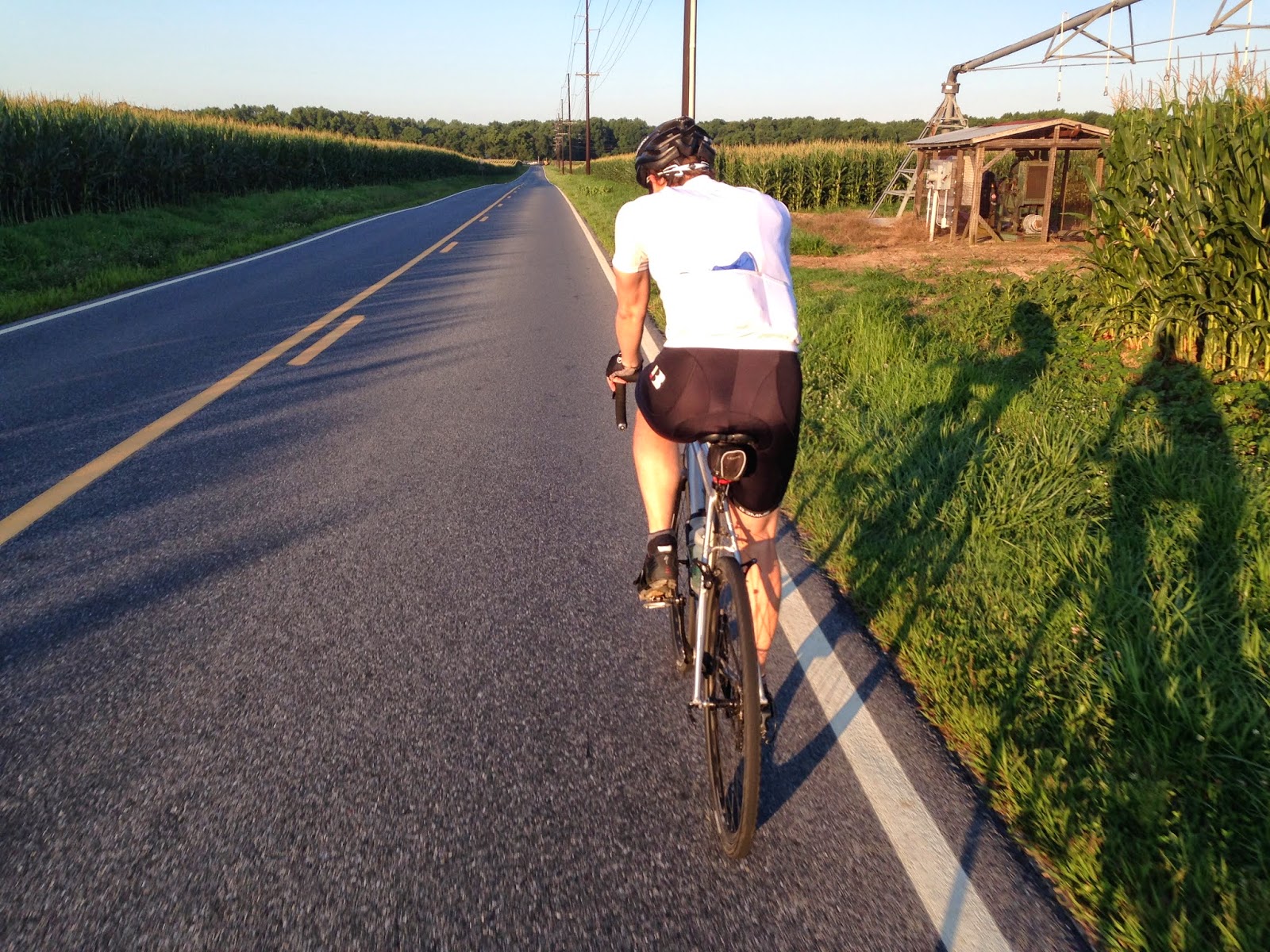 We rode through a lot of corn and on roads that actually were not bike routes.  It seemed that just about everywhere we rode around Rehoboth Beach the road was a bike route.  Today's ride essentially took us from the Walmart in Rehoboth Beach to the Walmart in Georgetown where he took a bio break.  I really needed it, too!  The ride through the State Forest was pleasantly cool, in fact the temperature on the Garmin red 62 degrees at one point.  And while I didn't hear any dueling banjos there were Rednecks aplenty. Some guy in a pickup truck passed us in the opposite direction going at least 90 miles an hour and another guy, also in a pickup truck, made sure to come within 3 feet us when he had the whole road open to pass. 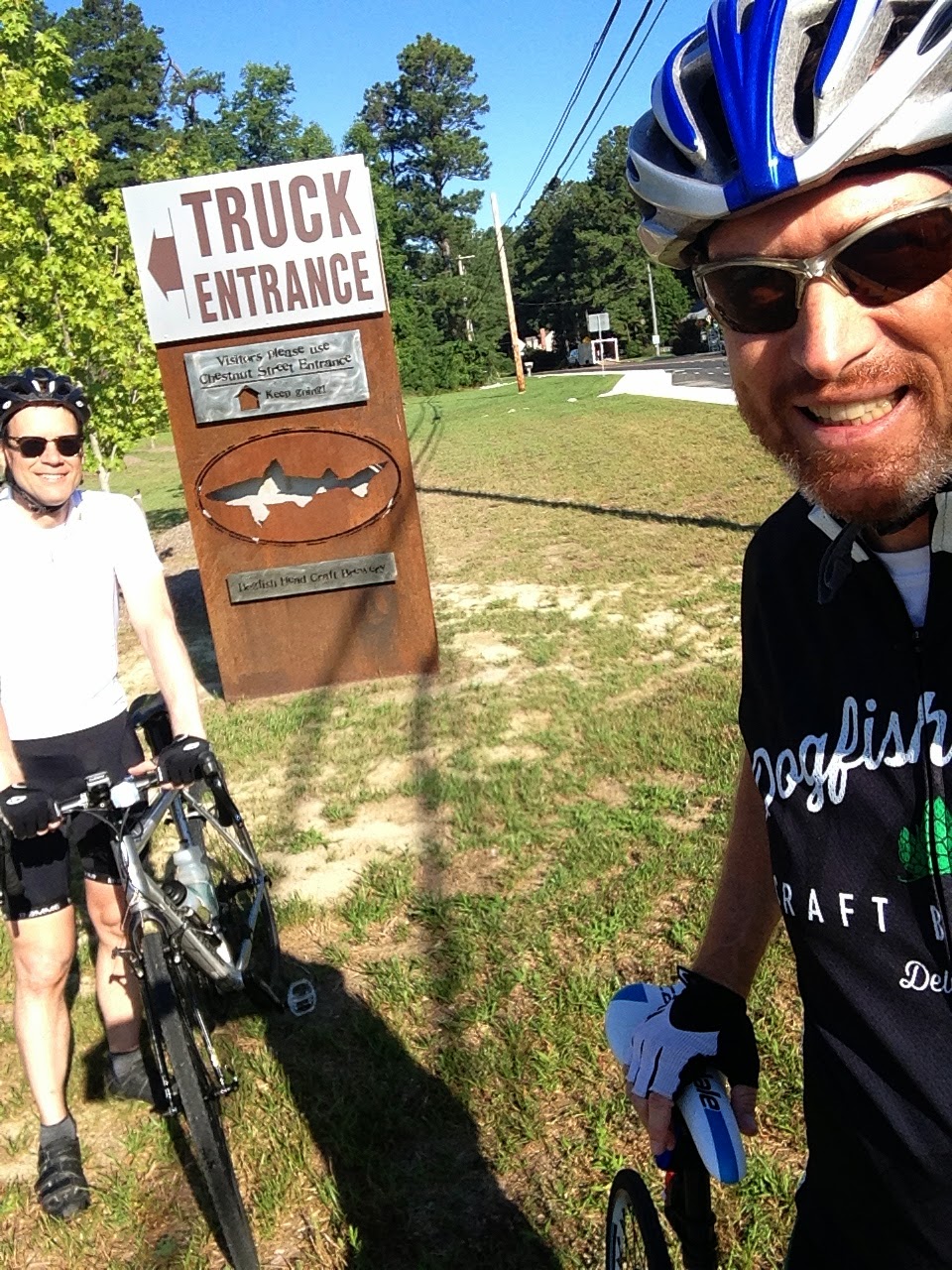 The route took us to the back entrance of the Dogfish Head brewery where we stopped for a little photo session.  I wore my new Dogfish Head jersey that I got on Thursday from the Brewery Tour that didn't happen.  We were all psyched to take the tour only to find out that everybody else in the area had the same idea because of the bad weather.  The free beer tasting was so slow, all I had time for was two beers. 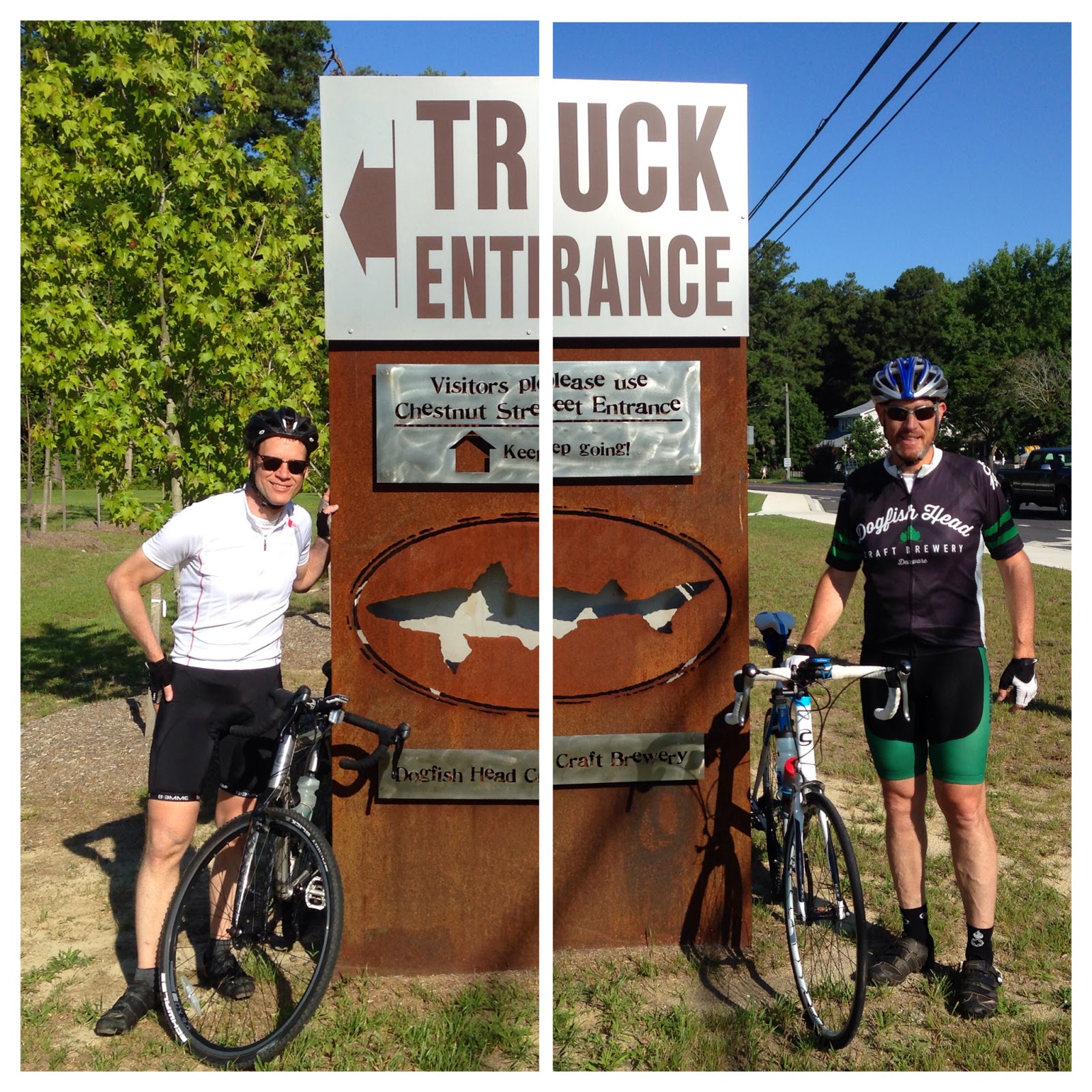 From Sunday to Friday, I rode a total of 240 miles and I think that might have been one of my biggest weeks yet!  After this ride, though, my right knee was sore and I probably over did it a bit.  It's good to know where my limit lies now. 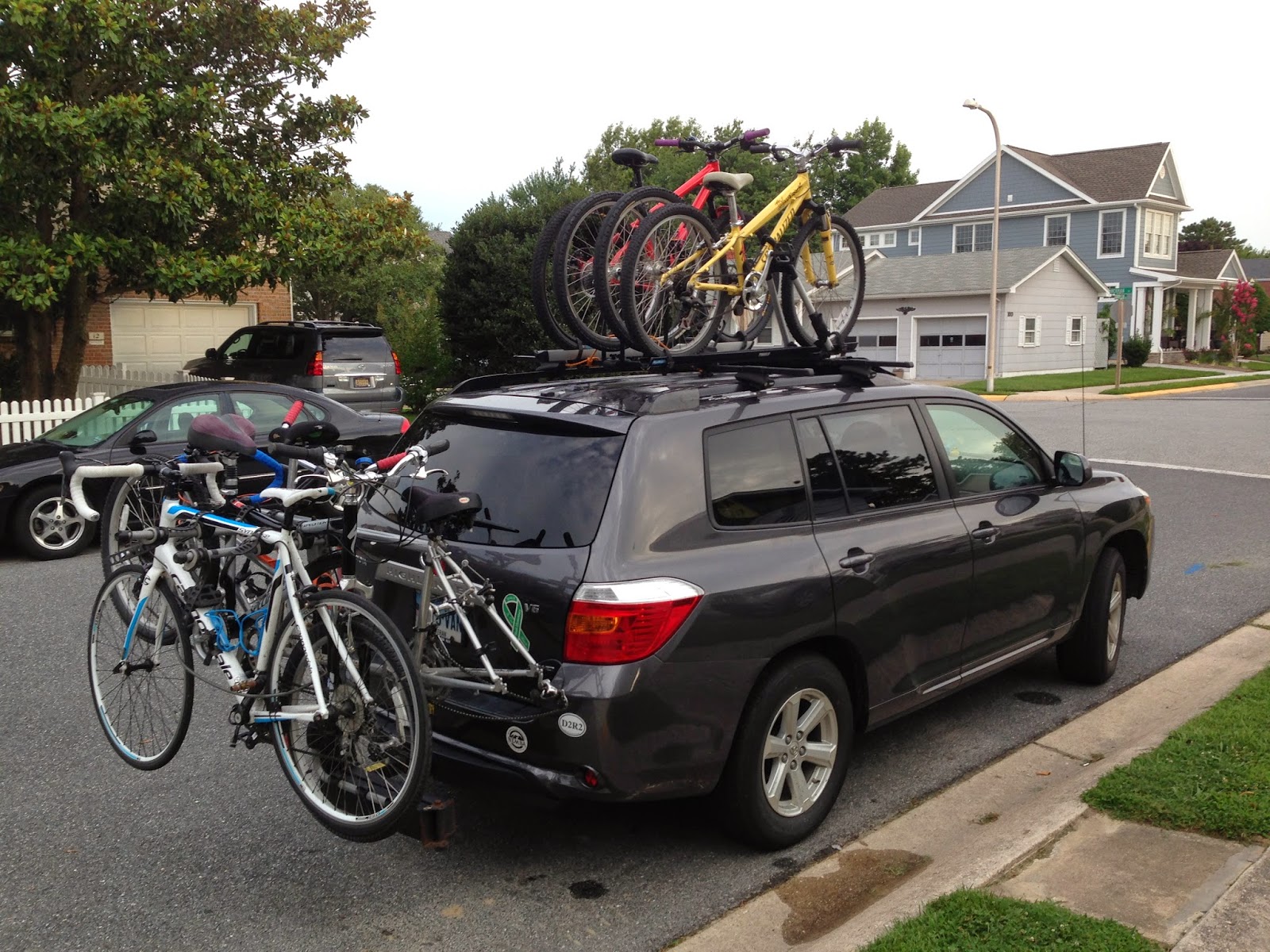 Heading home, this is how the car looked.  My daughter and son's bike on top of the car along with the tandem wheels.  On the back was the tandem, Elliot's Grandfather's bike and my road bike.  I could have taken one more bike and I should have brought my singlespeed.  Next time, I won't forget it.