Will and I decided to drive up early Sunday morning for Parent's Weekend at Camp Chimney Corners in Becket, MA to ride some gravel roads.  Both our daughters go to camp there and our wives were already up for Mom's weekend.  Sunday is when Fathers and the rest of the family can visit and we were supposed to be a the camp around 12 noon. 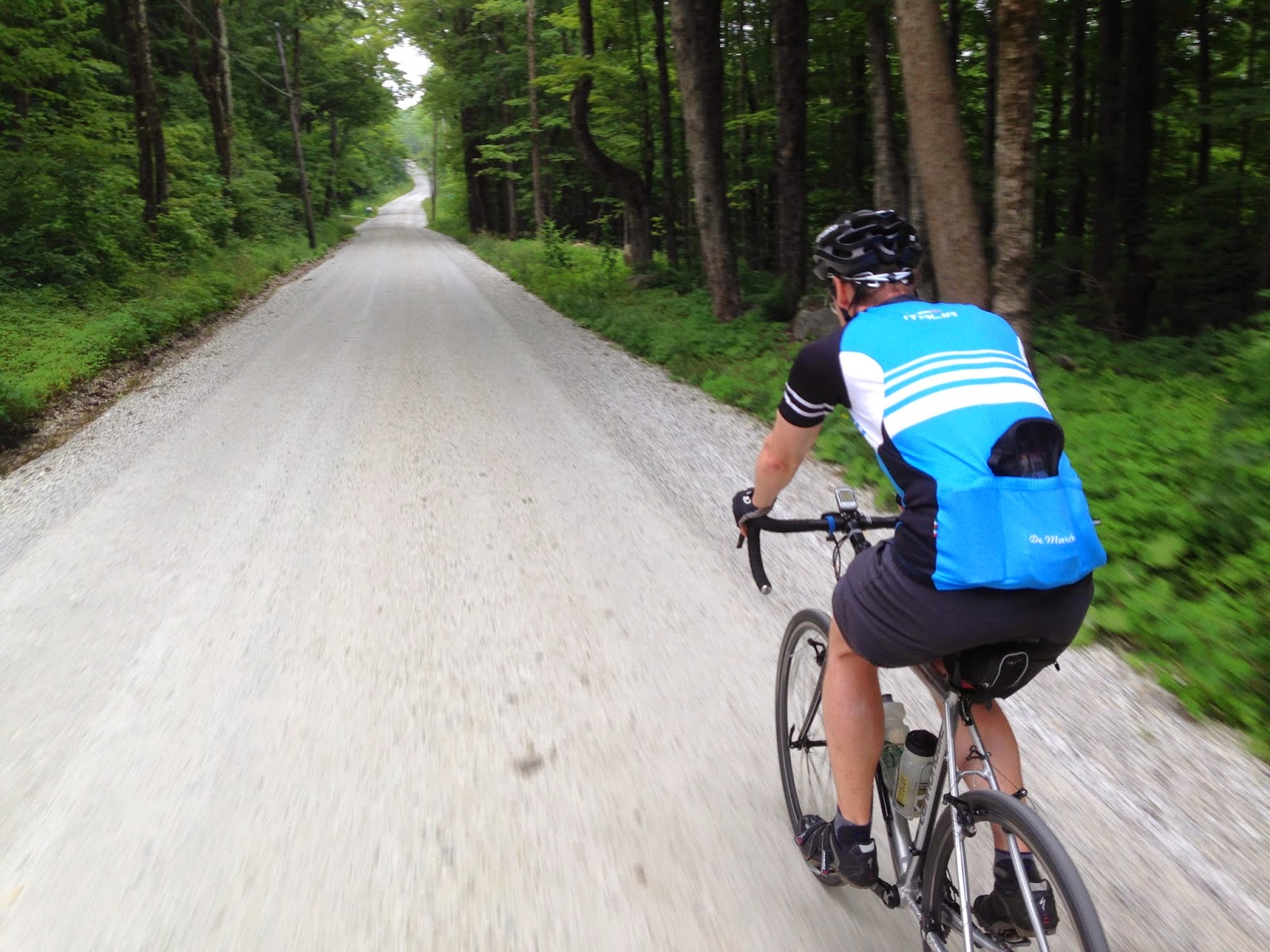 Getting there around 8 AM would give us 4 hours of riding a 50 mile Gravel Grinder I planned out with the help of a friend at the Berkshire Cycling Association, who is also putting on a the Fall Foliage Gravel Grinder or F2G2 this fall.  Unfortunately, we arrived around 8:15 am and didn't start riding until 8:40 which meant we needed to cut out some of the original course and trim it down to 40 miles.  The original course is marked in the map below in green and what we rode is in red.


When Will came up a few years ago for Parent's weekend he was exploring around and found a gravel road that went all the way to Lee, MA, so when we came out on Route 8 our route turned west just after the Otis Poultry Farm, instead we headed north and picked up Tyringham Road, which was dirt, and then took George Cannon, also dirt, which has a fantastic dirt road descent.


George Cannon from Mark on Vimeo.


The video is a little long, 4 minutes, because we are still climbing but starting at 1 minute 50 seconds we start descending and it's a wild ride!  At the end of this road is where things got really confusing because the Garmin kept trying to re-route us back on to the original course which at this point was the other direction. While this ride was not as long as a Populaire or even close to a true Randoneer, with all the course changes made it almost seem like we were wandering in the Berkshires by bike.  In German this would be called a Radwanderung (pronouced rat - vahnderung). 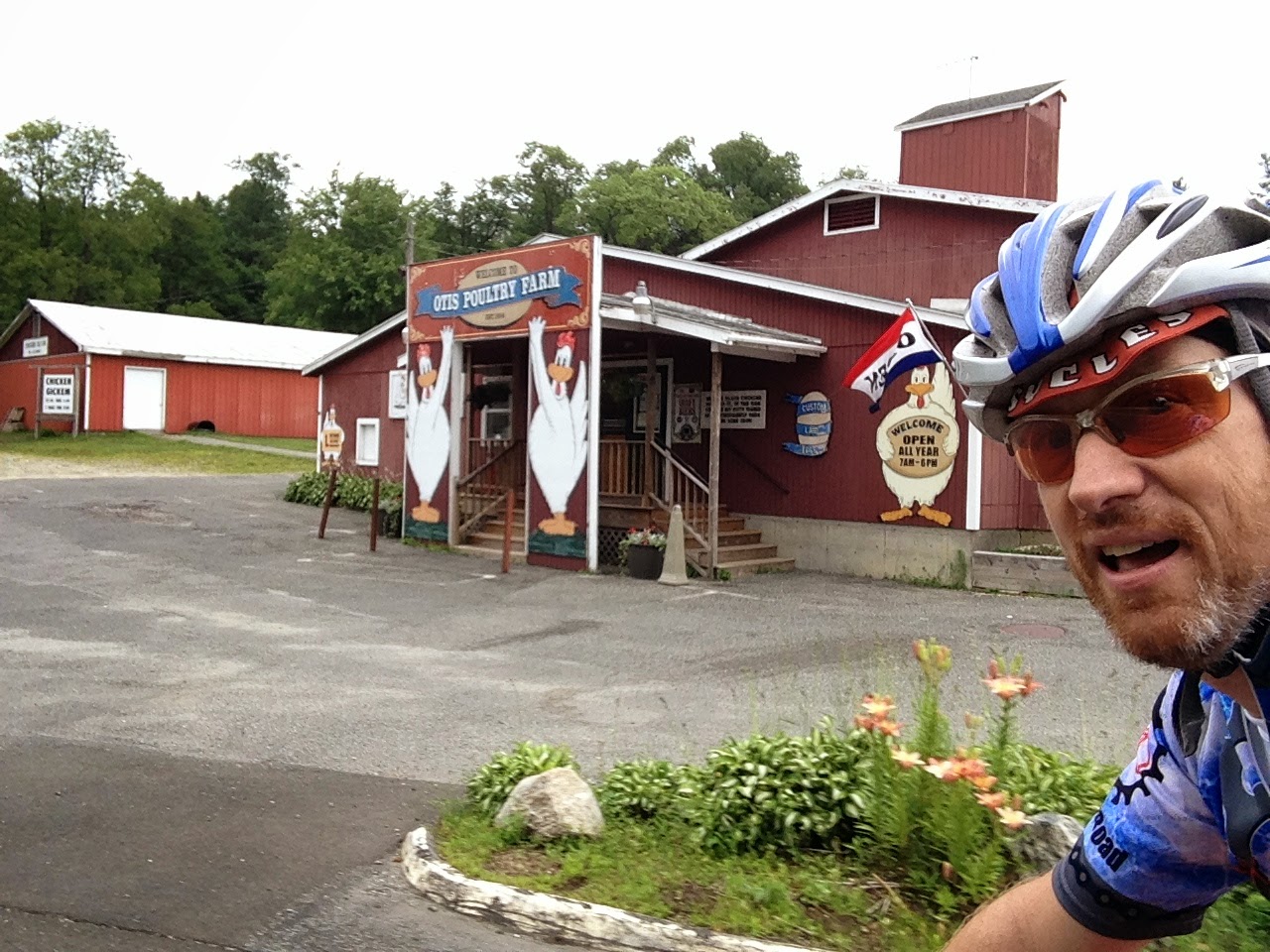 Riding past the Otis Poultry Farm 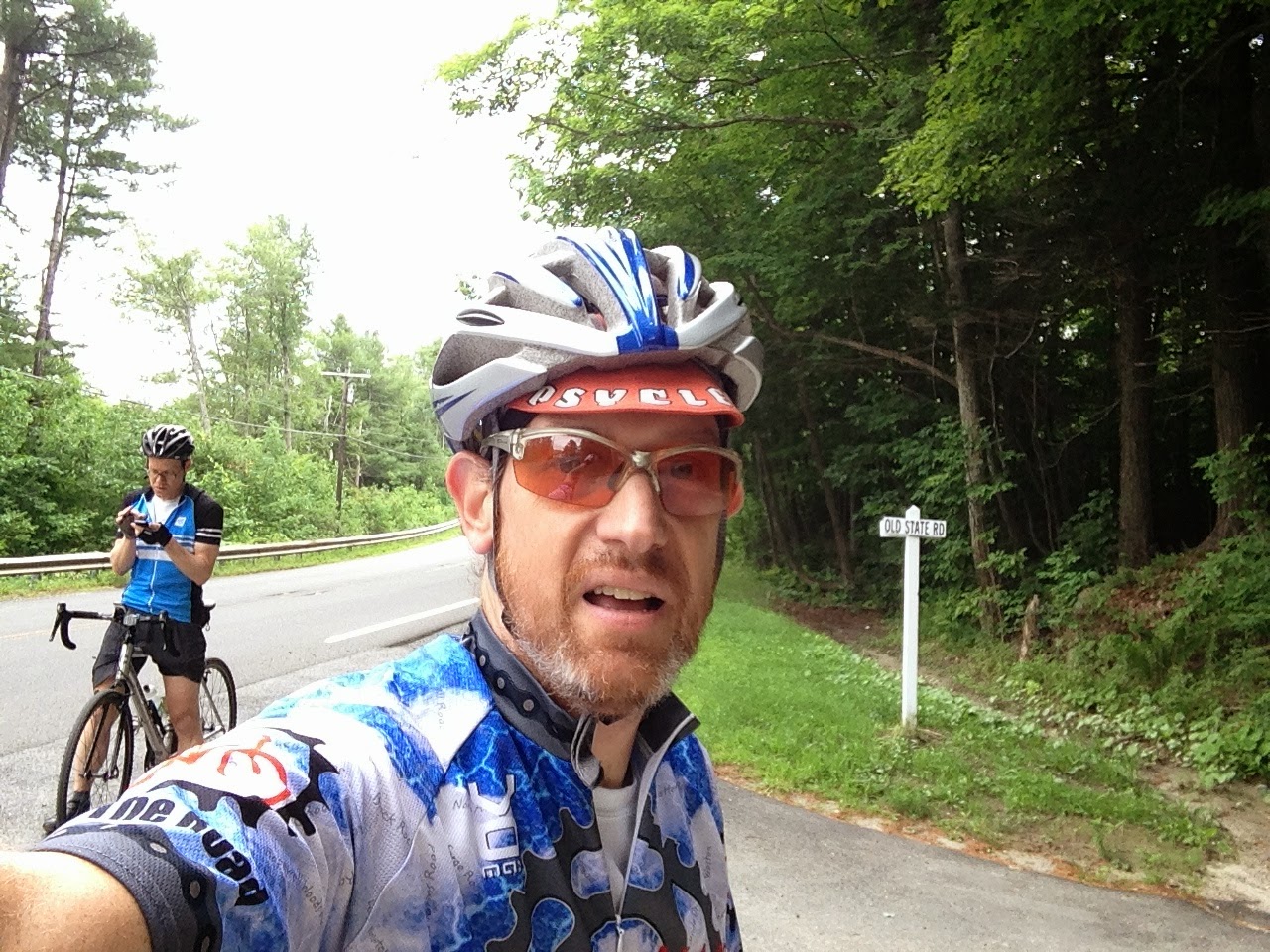 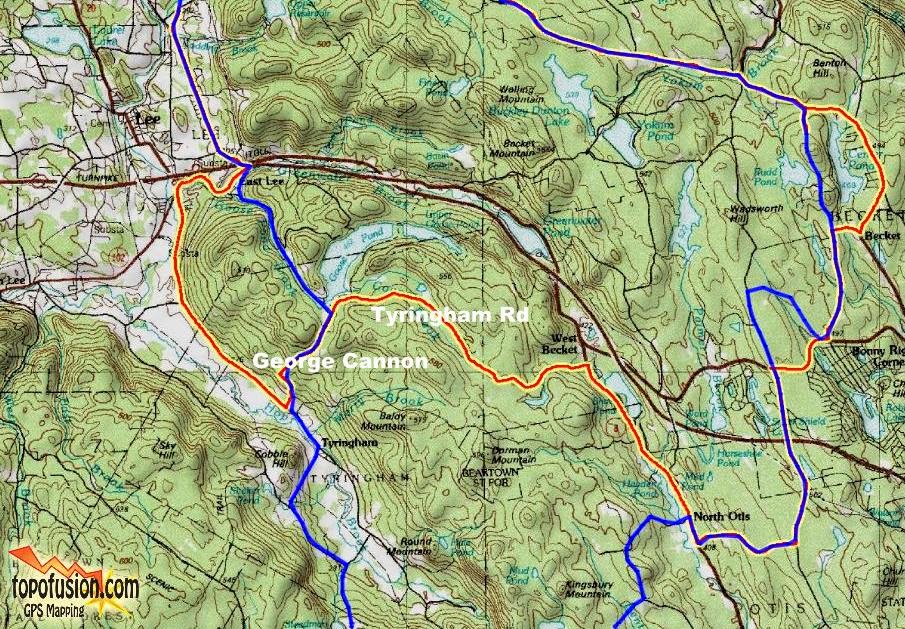 The Otis Poultry Farm is right before North Otis on the map above and that long dirt road that Will found a few years ago was called Tyringham Road.  There was quite a bit of climbing on that but it was all dirt! Ironically, the route that I planned would have took us up George Cannon in the opposite direction (blue line).  There would have been a lot of climbing but the descent was way better! 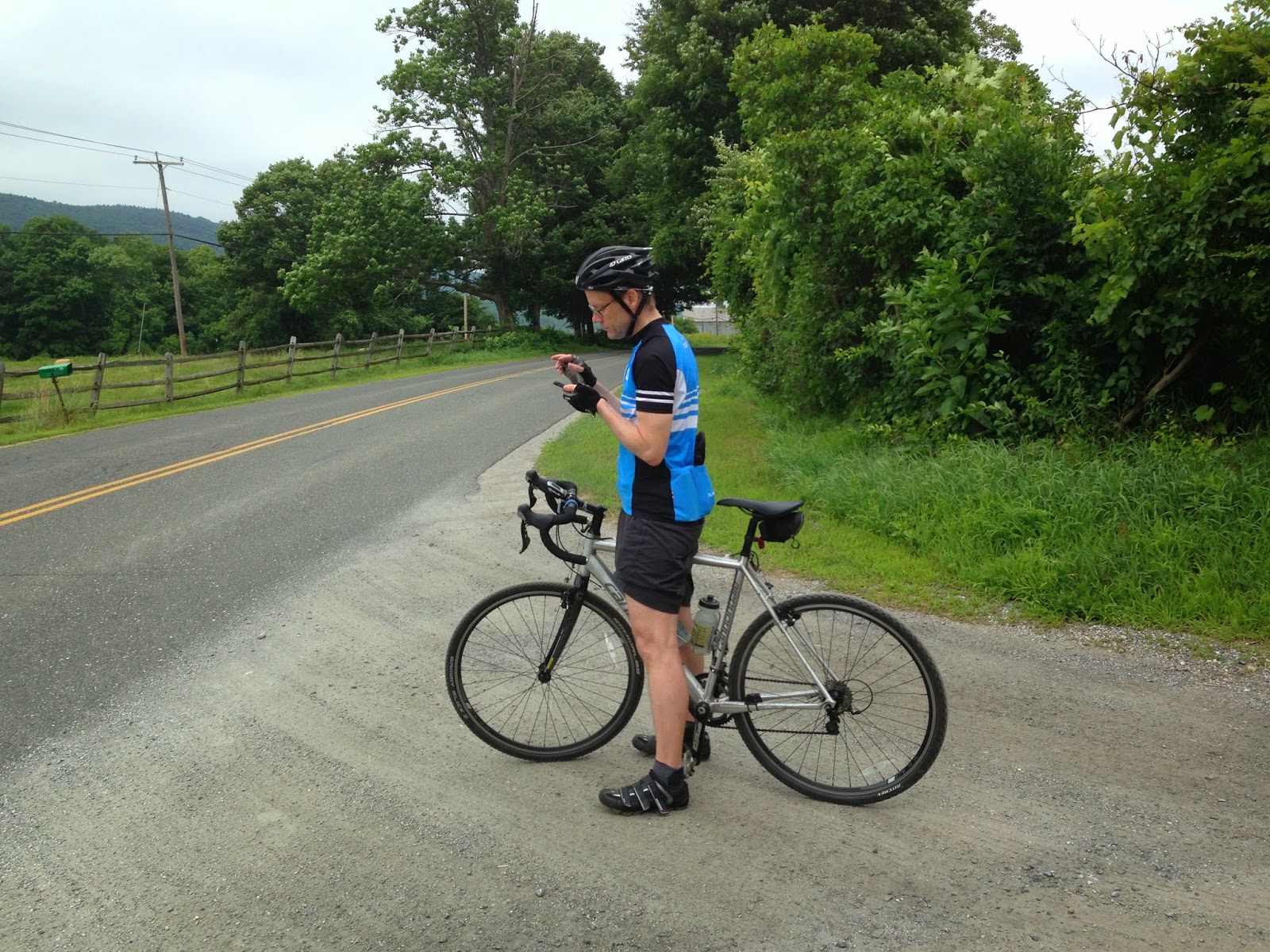 Another check of Google Maps as to where we were after George Cannon in relation to where we needed to go.  The next time I plan a Radwanderung in place that I have no experience riding I am going to create a personal Google Map of the course so that I can use my iPhone to track where I am in relation to the planned course in case detours are necessary or roads don't go through as we found last weekend in the Shawgunks and on Sunday, where the road between the Camp Becket Day Camp and Camp Becket turned out to be another mountain  bike trail!

The original route was supposed to go up Schemmerhorn Road in October Mountain State Forest but when we got to where it started it looked totally unrideable and we had asked the Park Ranger at the entrance about road conditions and he recommended that we take New Lenox Road.  Even at that, he looked at our bikes and thought we were crazy for even thinking about riding in this State Forest.  So, we went up New Lenox Road and using the map the park ranger gave us eventually found Farnham Reservoir but that in itself was brutal climb but my Surly Cross Check handled everything that the road/trail dished out smartly! 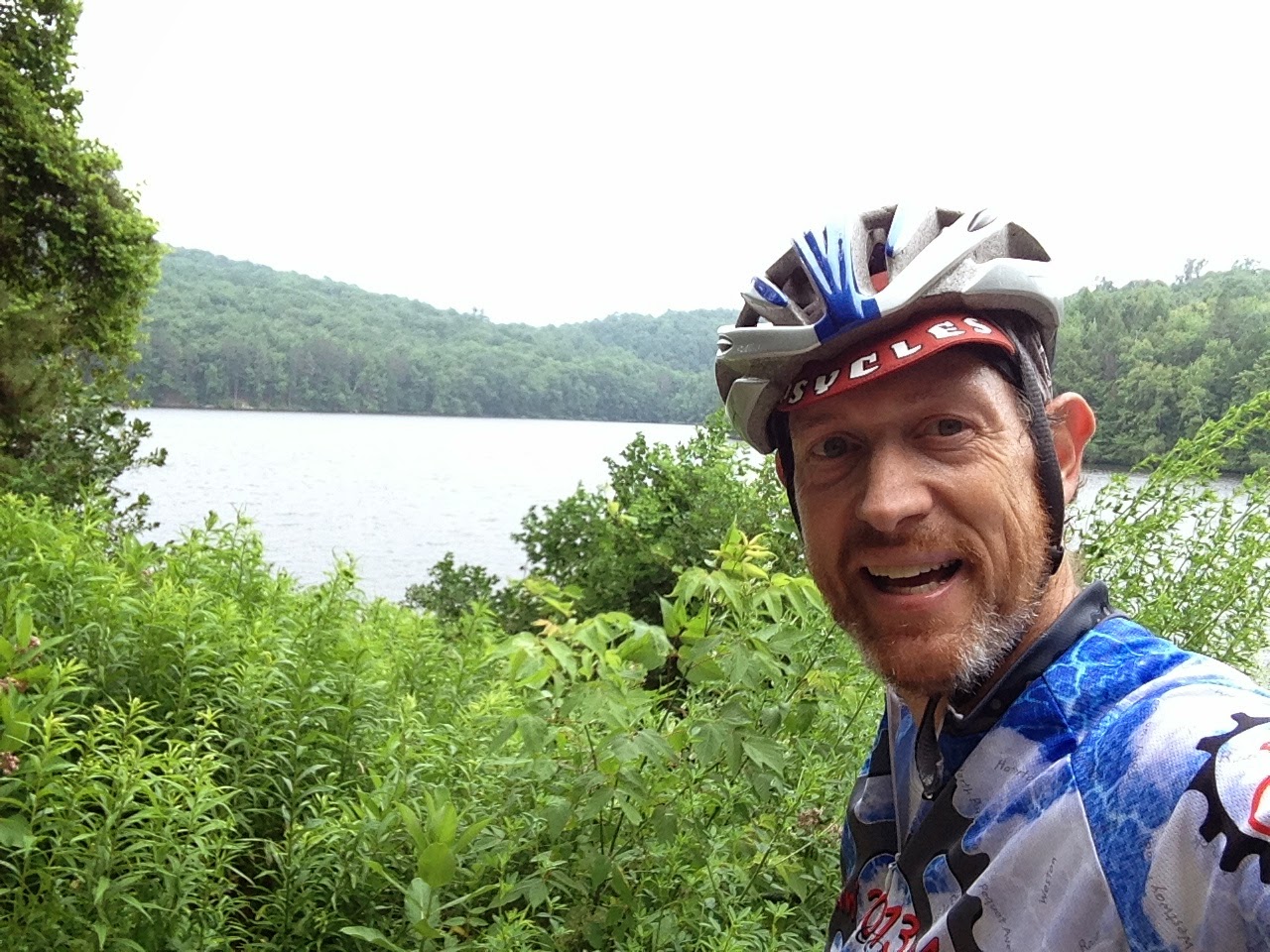 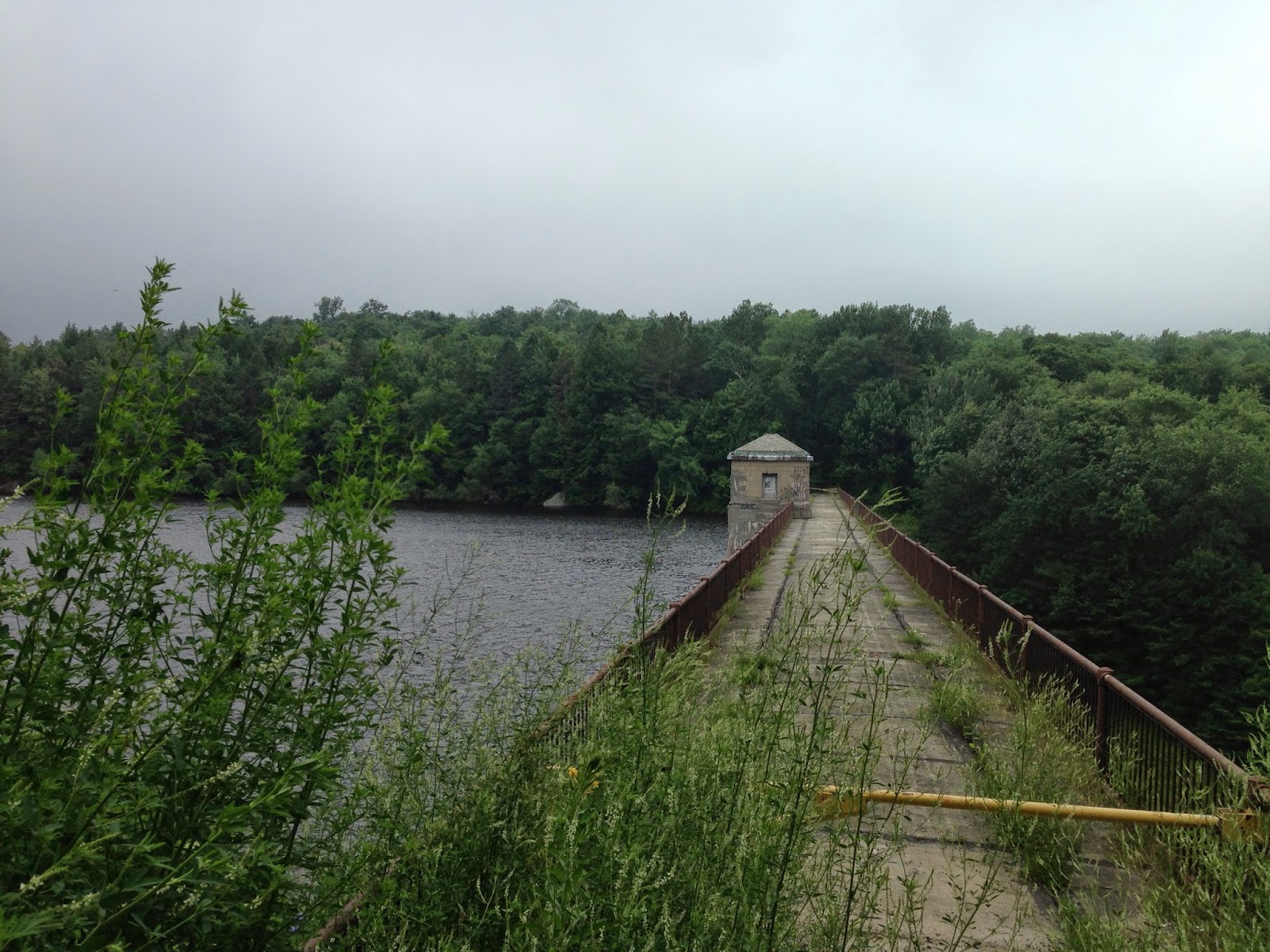 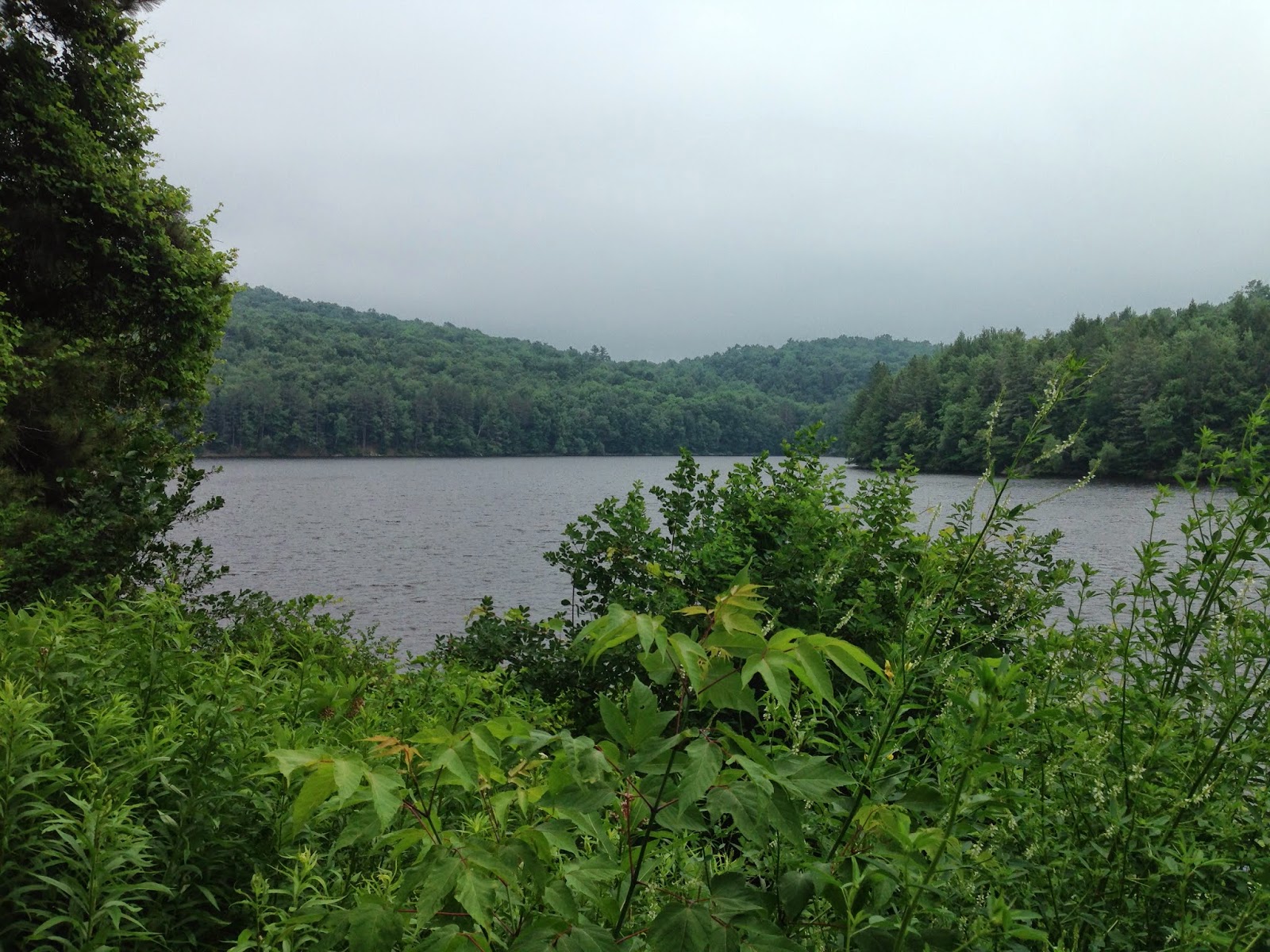 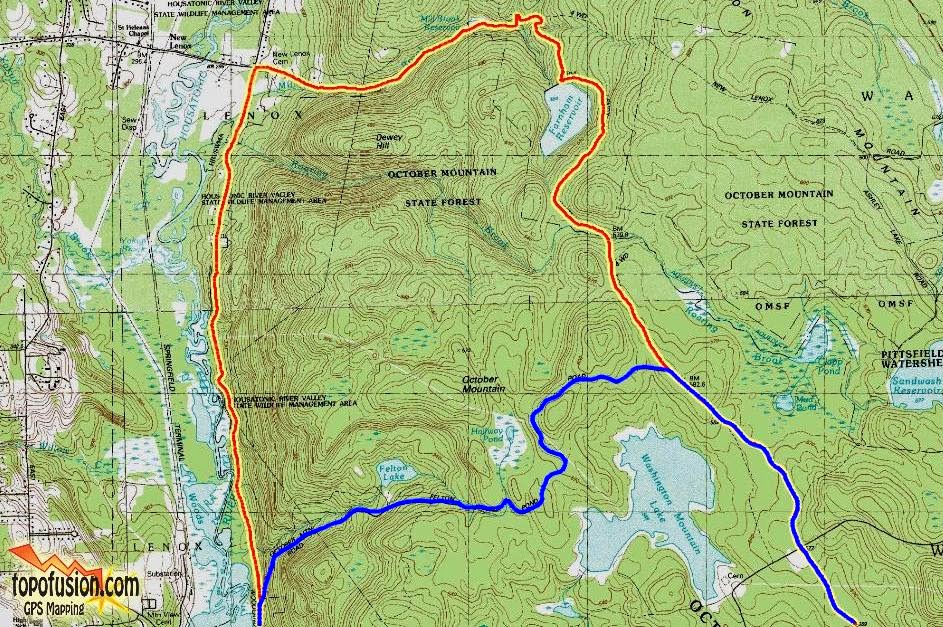 We continued on from Farnham Reservoir but the Road got progressively worse.  I stopped a dirt biker to ask for directions and see if there was a way to bail out but it didn't like there was.  I also asked if he had a bug repellent because we were getting eaten alive.  Looking on the Garmin, we were really closed to originally planned route so I said we should push on and that we did at one point.  The trail, and I will call it trail, by this point was completely washed out and unrideable for cross bike.  Doable for mountain bike. And then we found County Road! 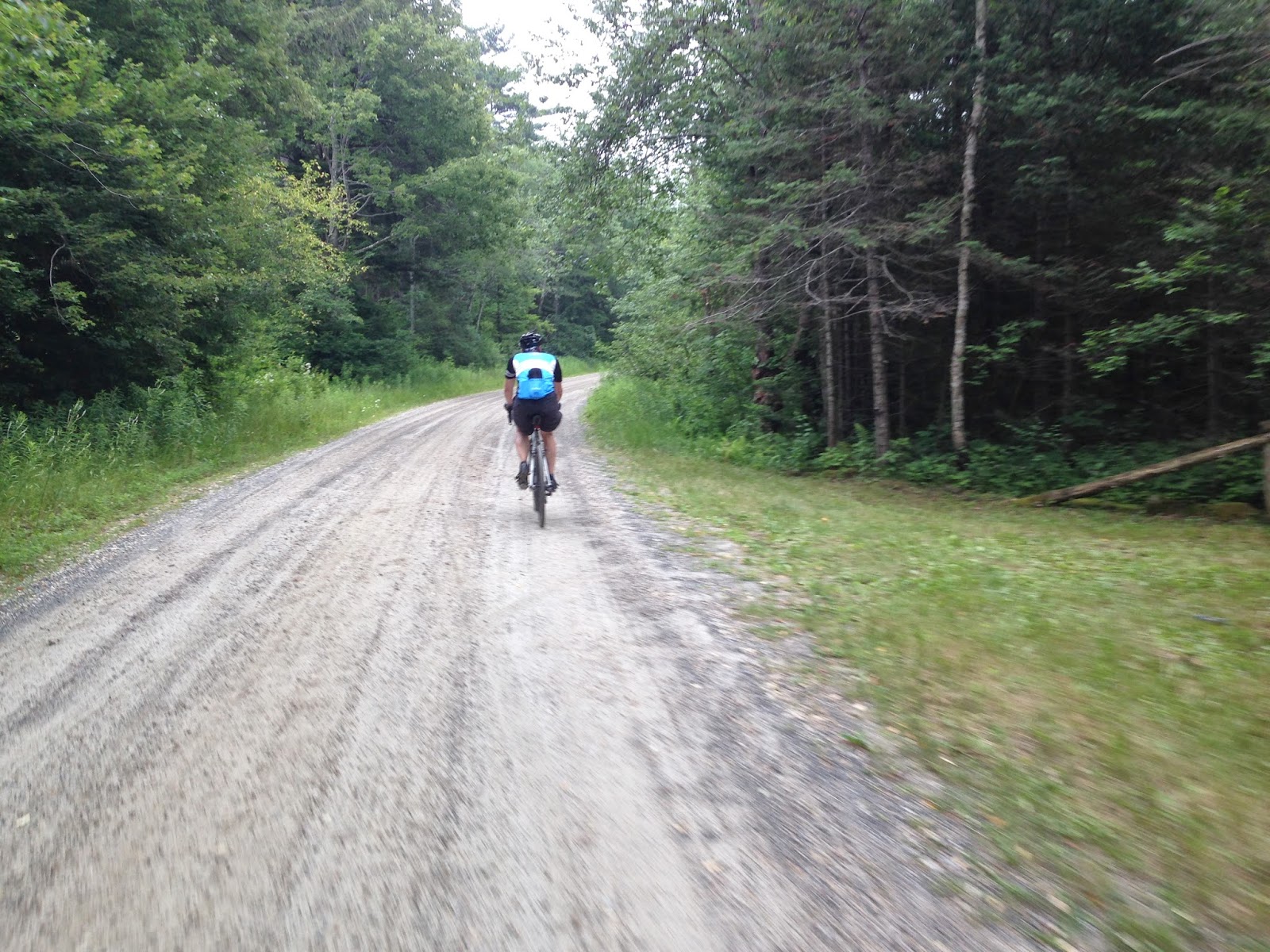 It was now 11:30 AM and Parents Day officially started at noon with lunch.  Fortunately, County Road was primarily a descent so we hammered, and hammered and hammered. 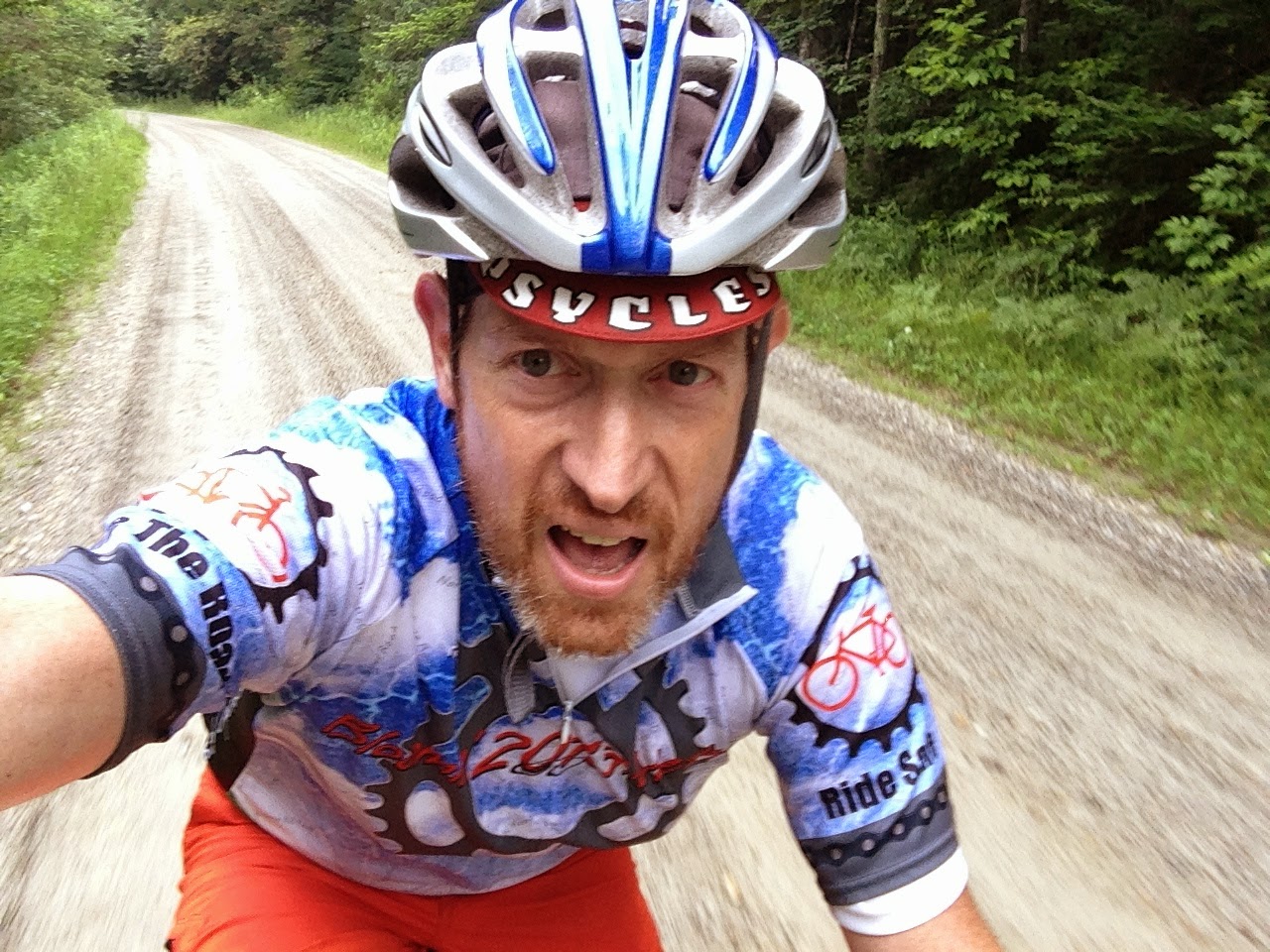 Nearing the Camp the course took us on Lane Road and according to Google Maps was supposed to go through but it turned into a mountain biking trail and we bagged it and rerouted down Route 8 into Becket and back to the Girls' Camp!  I spent the remainder of the afternoon with my beautiful daughter, Katie, as she showed me all her activities, introduced me to her friends and had a wonderful day visiting! 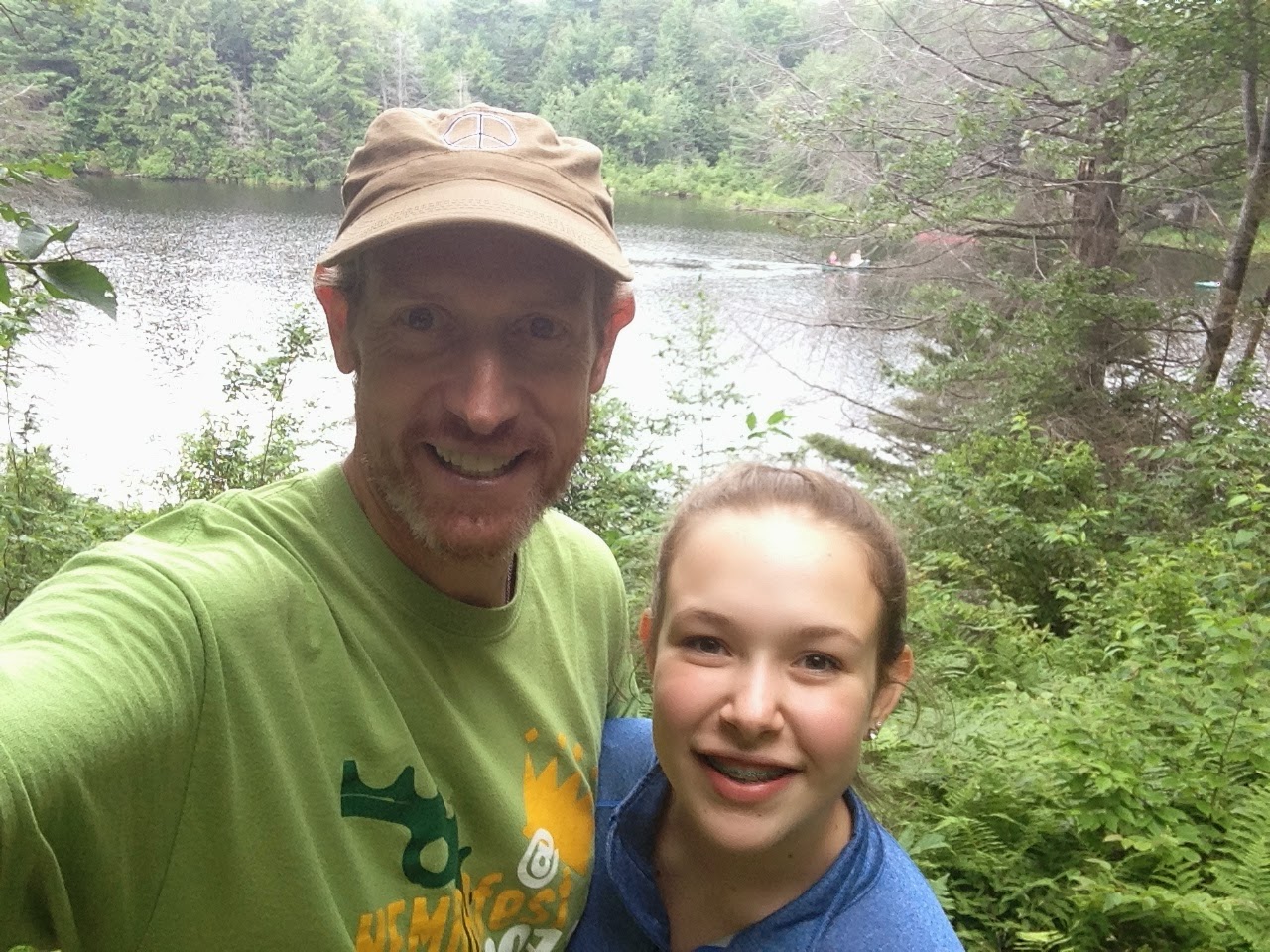