Teaching my son to ride 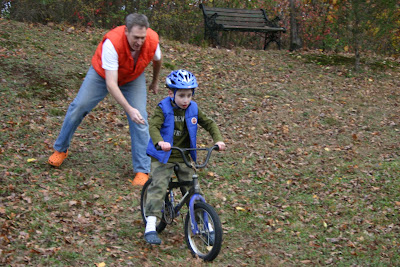 My oldest son, Elliot, has Optic Nerve Hypoplasia, which means his optic nerves are under developed and while he can see pretty good, his sight has some limitations like depth of field and peripheral but that doesn't stop him.  Last year he started skiing with the adaptive program at Ski Sundown and he loves that and he is going to do it again this winter. 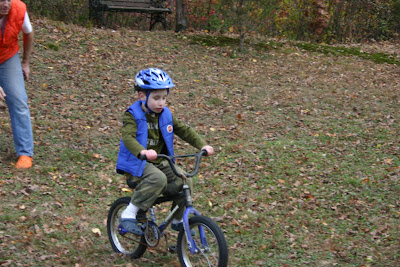 We tried riding the rail trail on a bike with training wheels and he was able to do that however he would prefer to not ride by himself and instead ride the trail-a-bike.  I kept asking him all summer whether or not he wants to learn to ride without training wheels and his answer has been flat out, no.  I offered games and various toys that he has to wait for Christmas but he has always said no. 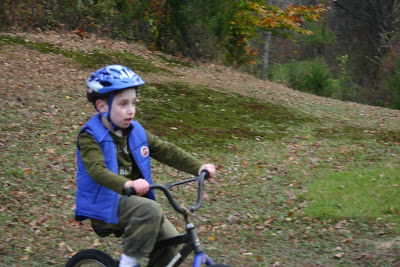 The other day, while driving home from work there was a little bike out at the end of someone's driveway up against a doll house with a free sign on it.  I thought it extended to the bike leaning up against the doll house.  It was dark out when I picked up the bike and didn't notice the envelope attached to the handlebars asking for $5 to left in the mail box until I got it home.  Ironically, the owner of the bike is someone I work with on the Newtown Trails Committee so I emailed her telling her I owe her five bucks but I didn't tell her why.  When she wrote back asking why I responding that I picked up the bike.  She said don't worry about the money because knowing I have it for my boys was good enough for her. 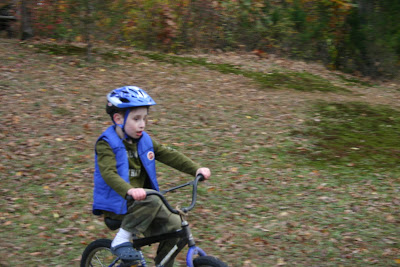 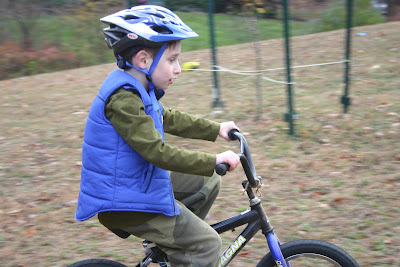 Initially, he had a hard time coping with the hill, so I ran behind him up and down the driveway a bit before suggesting we try the hill in front of the house, figuring if it was all grass it wouldn't be as daunting.  I think that was what did it. 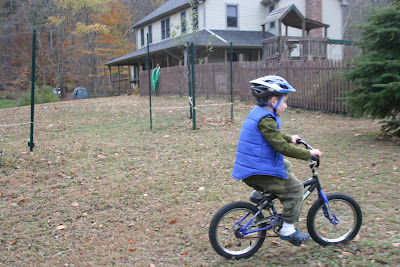 After a few rolls I told him to try pedaling and he took to it right away but the grass provided too much resistance for him so we went back to the driveway. 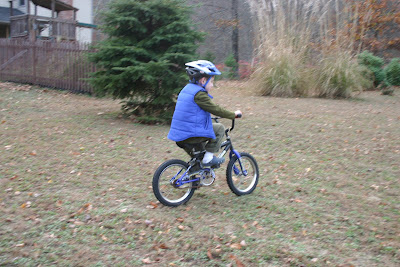 We spent the next hour riding back and forth on the driveway.  He still needs to work on turning and braking but that will come with more practice. 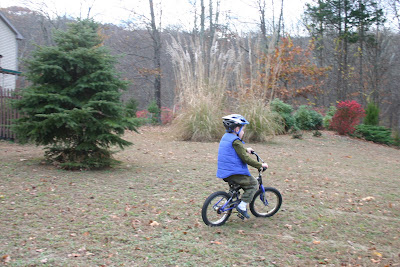 Very nice. Good for Elliot. At first I thought that was the Magna you got from us, but then I saw the purple fork and realized it was a different bike. A potential fleet of Magnas!