Another bike commuter in Sub-Rural-Urbia 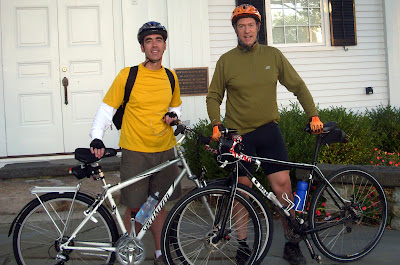 Last week I got involved with this Fitness Mentoring program at work and posted a comment about the ins and outs of riding to work. Ironically, the guy pictured above, Mike, I knew loosely through various interactions at the office and passed him last week while he was running down Castle Hill while I was riding up it. Later that day we were both in the same seminar and I mentioned that I passed him earlier that morning. He then went on to tell me about this program. Later in the week he mentioned that he was interested in riding to work.
Finally, our schedules meshed and he opted to join me for one of my commutes to work, I only ride twice a week, Tuesdays and Thursdays. I would like to do more but then the logistics get too complicated so two days a week works out fine. The fun thing about riding with someone else is that you push yourself to keep up with him or vice-a-versa and it seemed we zoomed up Castle Hill from the Newtown Flag Pole. From there it was up Great Hill Road, I don't even remember seeing the entrance to Holcolm Hill and then we hit the long descent down Plumtrees Road where I think we got going over 30 mph. It was 9 miles from the flag pole and 3 miles from house. Next time I will probably take him down Rt 302 and I will be on my fixie. It will be interesting to see who keeps up with whom.

I went out and got one these Planet Bike 2 Watt lights with superflash because I think I need something that makes me more visible on the road. The nice thing about this light is the mount comes off quickly so I can move it to bike to bike. Which is a good becasue I definitely want to use this on the tandem when I am riding with my daughter. 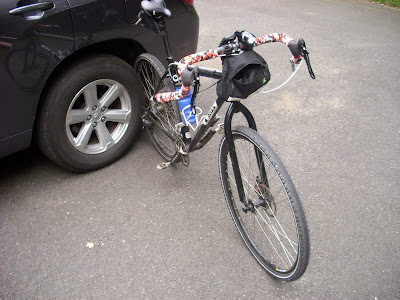