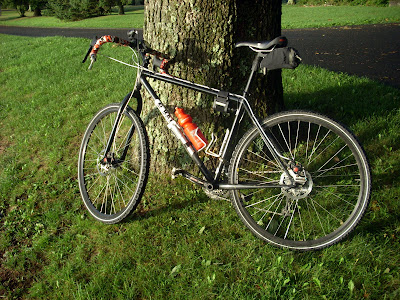 It rained Wednesday night which meant the roads were wet but I was determined to shake off that fair weather commuter status that I have held for the past two and a half years.  With the Stinson awaiting parts I reached for the Qball to continue my weekly commuting.  My commuting goal for this year is 500 miles and I  am not even half way there.  I completely forgot that that have some portable fenders and I should have put them on for the morning's ride but I wasn't thinking?  Actually, it wasn't that bad.  I got a little road spatter on the descent down Plumtrees. 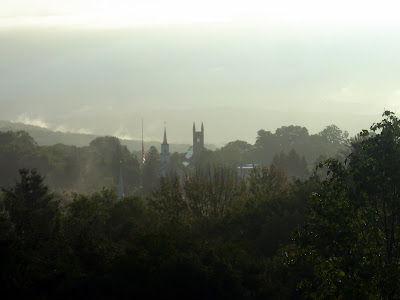 I rode up Castle Hill and the view in the morning was spectacular.  Sunrise would be incredible.  The Qball rides so well and it's such a pleasure to ride.  Also, riding with the messenger bag is getting easier, too.  As you can see by the profile below, there is indeed quite a bit climbing on this route and I always thought Castle Hill was the highest point in Newtown on the roads, but it's not.  That second peak is next to Holcolmbe Hill, which is this highest point in town but you would have to climb up the gravel driveway, which is open to the public.  Next time I go this route I am going to throw that into the mix.