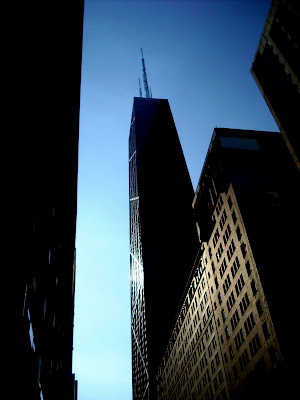 On another bikeless trip out of Sub-rural-urbia, this time to the magnificent Windy City I found has a really interesting bike culture.  Like any other big city, there are tons of bikes and even more so that residential apartments and condos are smack dab in the middle of the city, too.  One thing that stood out though was I saw a lot of people riding single speeds but they were also coasting?  What's up with that?  Here you are in an area that is a Carpenter's Dream and you are pushing a freewheel.  Unlike NYC, it seems the Hipsters are a little sparse in the land of Pizza, Bratwurst, and Beer. 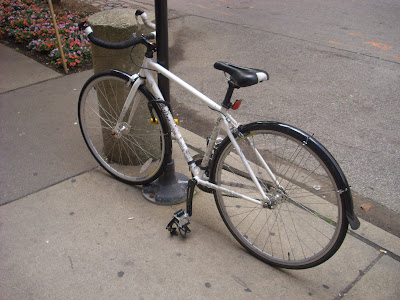 Across from Gino's Pizza was this little hottie of a Redline 925 with bullhorns and fenders.  Perfect fixie rig but the chain is on a freewheel cog. 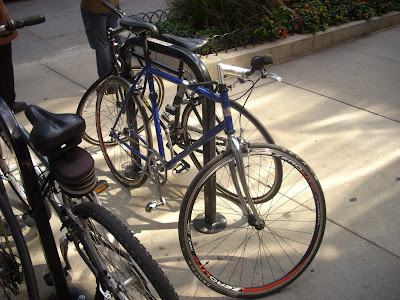 While I was checking out these two bikes, especially the pimped out Blue Myata (old crappy ten speed conversion bike) with track wheels and a shiny new chrome fork, the owner of the bike appeared.  I asked him why is he riding freewheel and not fixed? He told me riding fixed is bad on his knees.  Then I asked why don't you want ride gears?  His reply was, "Then I wouldn't look hip."  P-O-S-E-R. 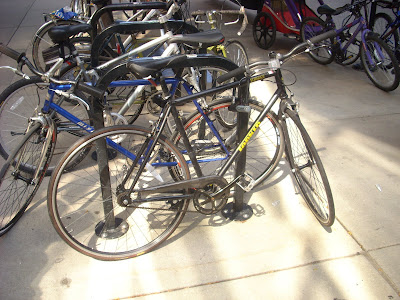 Next to the Myatta was another wolf in sheep's clothing, a Torker Commuter, also freewheel.  The commotion I created with the Myatta owner caused the owner of the Torker to come running out of the building and wanted to know what was going on.  I told him I was just admiring his bike but saddened that it wasn't a fixed gear.  To which he replied, "this how I got the bike."  I pointed out that he has a flip flop hub and all he needs to do is throw on a track cog, lock ring, and he would be The Man and hot chicks on fixed gear bikes would swoon over him.  I think he liked what I was telling him because he said he was going right into his office to order a track cog.  Looks like I may have a convert! 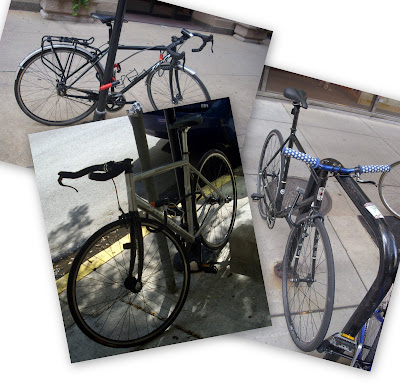 But it wasn't all doom and gloom.  Above is a little taste of what I did find on the streets.  And of course it was not all hard work beating the streets in search of bikes.  I did take in the sights of Chicago, too, and drink some beer. 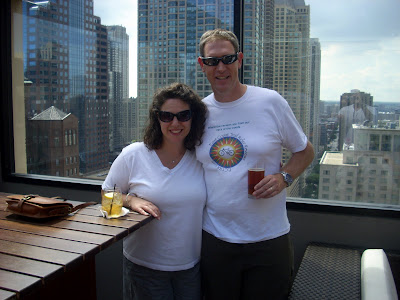 My lovely wife and I enjoy drinks a the top of the Affinia Hotel's C-View bar.  I had a Stone Pale Ale that was killer.
at 6:10 AM

Good bike-spotting! I need to step it up a bit with my Bikes Outside posts.

yes, quite a few fauxies were out and about. I see that from time to time in NYC, too.