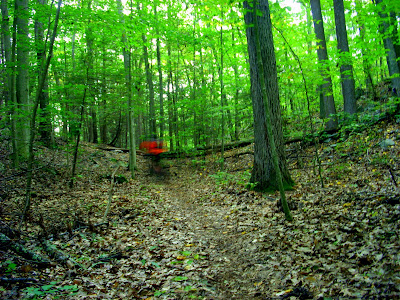 Met Rick for an early ride (6:30 AM) at Upper Paugussett State Forest on Thursday morning. We first rode up the Gussy Trail, something he hasn't tried before and I am now doing on every ride. It really puts the trail in different perspective and it rides like two different trails. I think mainly because on the way up because it's mostly climbing and then on the way down it descending. Every little nuance on the trail winds up with a different approach in either direction.

Rick brought his Flip and shot some vid of me riding up this one section where it's a technical climb up followed by a fun up-and-over.  I dabbed on top of the log.  Right before this section, though is another up-and-over that I have ridden many times but this morning I got hung up and went OTB. It was kind of like a ballet because as soon as the bike stopped in place but I didn't I unclipped without thinking let go of the bars, stretched out my arms like Superman, landed on the ground and tucked into a roll. 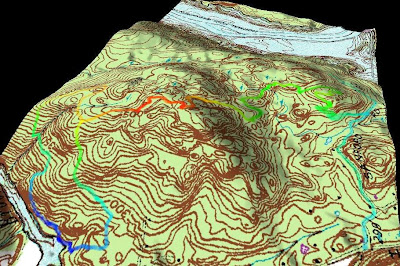 We at the top of the Gussy, we tried the new up-and-over the trail gnomes built last weekend. It rides really nice but since the ramp falls short of the log by about 12 inches and same with the ramp on the other side it has a double kick in it which if you are expecting it or ready it will throw you off.  I took some video of us hitting the Kicker, too.

Your chainring or guard will hit the log first which slows you down but when your rear tire hits the log, it will throw you forward when you are trying to be as far back possible to roll through it. 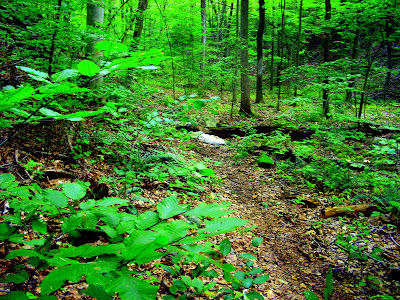 At the end of the Gussy we took a right on the Brody and then first left on the Mulikin Trail, which is more of an old cart road and skidder path that has some fun sections in it. Looping around we picked up the Brody again for the big climb back up to the Gussy. Then it was fun and games down the Gussy, only on the Log Ride Short I rode it in both directions but on the way back Rick's rear tire slipped off one side and the front went the other and bike straddled the log. Unfortunately this caused him to pinch flat. Of course Rick wanted to hang himself and tried to do so with the bumb tube but then he realized he would be missing out on future rides and decided to change the flat instead. 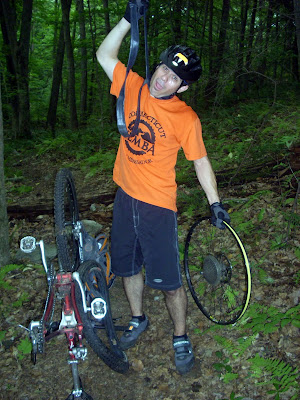 Then it was business as usual down the rest of the Gussy hitting all the stuntry along the way. At Sanford Road, I ended up heading home becasue I was now running late due to his mechanical. It was a great 7 mile ride with cool tempuratures, no rain, and perfect conditions.
at 12:30 AM