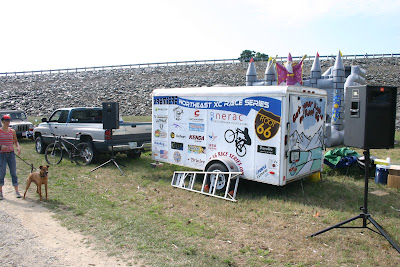 The 2010 Hodges Village Dam Root 66 Race was an ass kicker!.  Since it was pretty close (1:45 driving time) headed up there early to get in a pre-lap and to assess the course.  While pretty flat the roots and rocks made the trail really technical but the course was super flowing with banked curves and a few sections that you could really open up on.  There was only one serious climb and real steep technical descent. 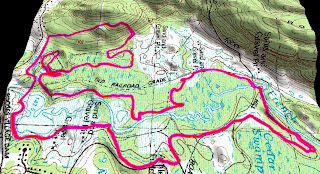 There were 9 racers in the CAT2 Single Speed group on Sunday and seeing that I am such a slow starter I started in the back that is where I remained the whole time.  Hey, I am really a CAT3 racer that doesn't want to make the 9 AM start times for the CAT3 races.  On that technical descent that I mentioned earlier I rode down it nicely but my front tire slid in the dirt in one section and I went down on my knee.  The rest of the course was pretty good on the first lap.  I got passed by a bunch of guys from the 50+ and the women.  Just before the old railroad grade Harold Green passed me, too.  I thought my first lap went pretty well but my time was a little slow (45+ minutes).
My second and third laps went down hill from there because it was such a brutal course.  A few crashes along the way didn't help either but thing I felt was while I still had lots of energy for the other two laps I realized that I didn't train enough the previous week to prepare for this course.  Towards the end of the first lap this guy Phil, who rides a Fuji Tahoe 29er, geared, passed me. 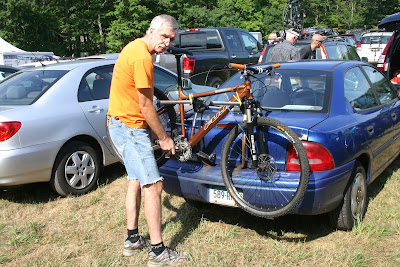 At Domarski Farm, Phil caught up to me and for most of the race I was either on his tail or he was on mine.  When he passed me at the Dam it was the sort of the same when he passed me.  He was in sight on lap 2 for the first part but right before the big technical descent I had to stop and adjust my shorts because where the chamois hits the road I was chafing.  On the lap 3, I had caught up to Phil again but the chafing was worse.  I put used guu pack in there hoping that it would help and it did, for awhile at least until it fell out of position.
I caught up to Phil somewhere halfway into lap 3 and he let me pass him.  He was on my tail for a while but then I lost him.  About a mile from the old railroad grade I came across a single speeder that was riding a Stout and he was all cramped up.  He said he relayed to other riders his dilemma.  I started to feel the twinges of a cramp in my left hamstring tendon so I tried to ride more out of the saddle and that seemed to help.
I finished the race at 2 hours 37 minutes, a good 40 minutes behind the next single speeder.  But hey, I finished a real hard course, hardest that I have ever encounterd, and I placed 7th out of 8 (on the board).  There were 9 riders but one was a last minute entry that they miscategorized.  We'll see if they get it straightened out in the results on the web.  Makes me wonder if it's worth trying to do the Land Mine Classic. 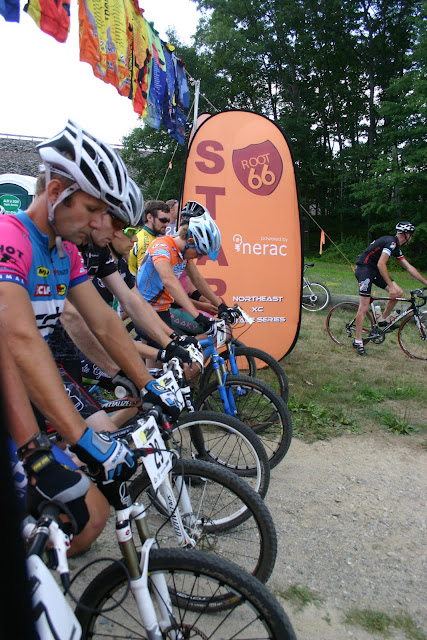 There were two others from NEMBA Racing for the team at Hodges Village.  Harold Green, seen below handing his son, Matt, a bottle during the CAT1/PRO race. 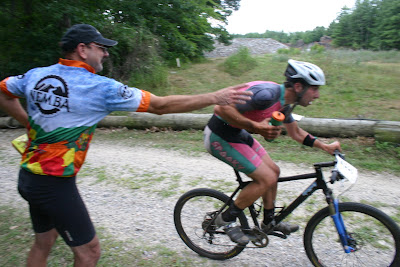 Also racing for NEMBA was Dan from Boston who was in the CAT3 race riding a custom, monster 29er from Zinn. 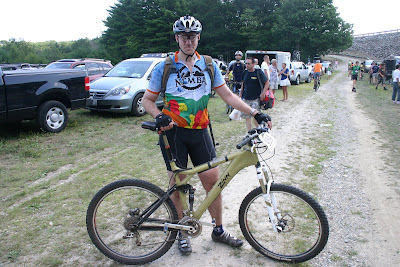 Riding in the CAT1 Single Speed class, fellow cycling blogger Charlie Beal, who as I was taking this picture (below) yelled at me to get him a water bottle because he dropped one on the course.  I went back to my car and fortunately I had an extra full bottle of water that he could have. 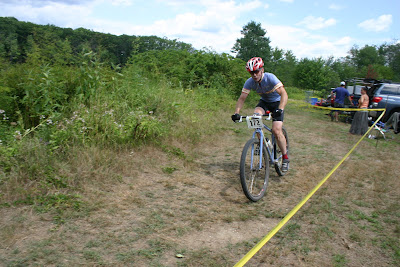 When he came back into the feed zone 30 minutes later he said he stopped to pick up his bottle and was good.  Charlie ended up getting 2nd Place. 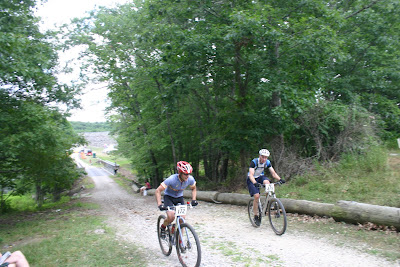 Over the next week I will be posting the remaining 100 or so pictures that I took.  Bookmark this link to make checking back easier:  Hodges Village Dam
at 7:46 AM

You wouldn;t happen to have any pictures of the CAT3 race would you? It was my first ever race, and didn't have anyone with me to take any photos. I was bib # 956 if that helps.

You are the guy from Crankfire, right? I responded to you but I looked through everything I shot and didn't see anything matching your description. I will have a post of the CAT3 race here tomorrow. See if you recognize anything. I have a few picks from the back on the starting line that I didn't include. I might do a miscellany post with those. I will check again.

Sorry, didn't realize you were the same guy from Crankfire. Thanks again for checking. Maybe I'll see you this weekend at Norcross Scurry. I'll have friends/family with me this time.