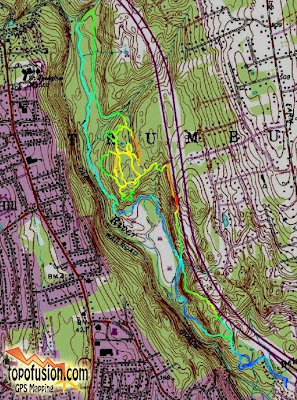 Following the meeting we had with Trumbull's Land Manager, we hit P-Valley with the fat tires. It was an awesome 8.5 mile including a trail that I never ridden before. There is another ridge trail that parallels the highway and comes out on the access road. That trail is freaking awesome! Tight, twisty singletrack that opens onto some slickrock right next to the highway, only the highway is actually 30 feet below! 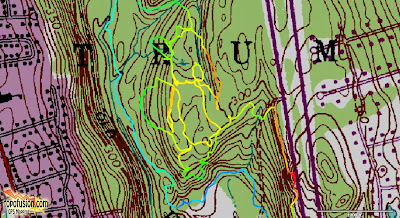 Between picnic tables and the trail that leads to the Bat Cave there is relatively flat area with a spiderweb network of trails that I love riding. There all sorts of little nuggets including drops, rollers, armors, rock gardens, and slick rock. One of the projects of the Trumbull Trails Coalition is going to blaze the existing trails in this matrix of trails into something coherent, or at least something you can follow. It would be really hard to get lost in here but if you weren't paying close attention you could re-ride a trail that you just rode. 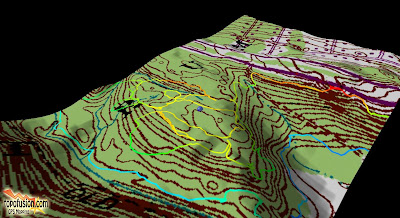 Here is the matrix in 3D! This view is pretty good, the shaded cliff to the right is where the cliff trail runs which I never rode before. Also found an interesting loop that goes down towards the white trail but then circles back and intersects the trail again. It's OK but the section of trail that it by passes is cool slick rock with rollers and rock gardens galore. It's a section of trail that is not to be missed. 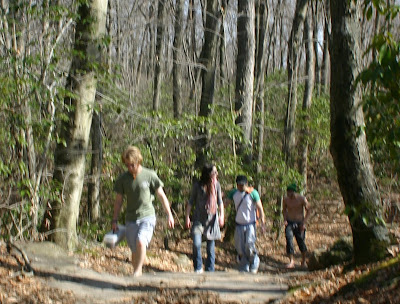 Then there were these guys. The guy in the front carry the plastic tool box is the fearless leaders, leading the way. At first I thought what would you do with a tool box and then judging by appearances it might make for a excellent way to carry some sort of contraband. After all, they are hippies, right? 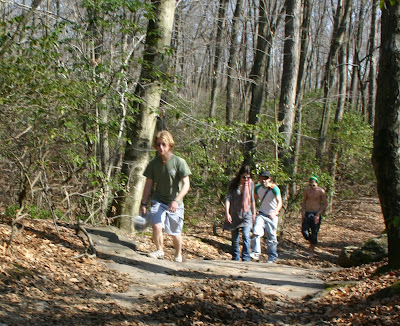 Actually, the box was clear and it looked markers. I didn't see anyone carrying paper or an easel so they were either intending to sniff marker fumes, draw on themselves, or both. 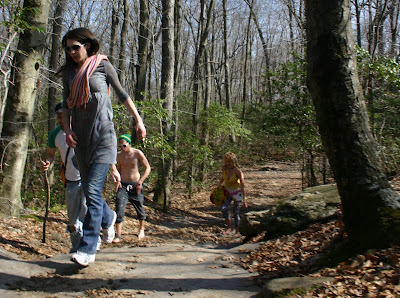 Sandanista-chica looked like Aunt Flo was visiting being the one with most clothes on but either she is just a wee bit portly or preggars by one of these bastards.

The Charles Nelson Riley wannabe had the least amount of clothing on and must have been really loving life to walk the trails without shoes on. 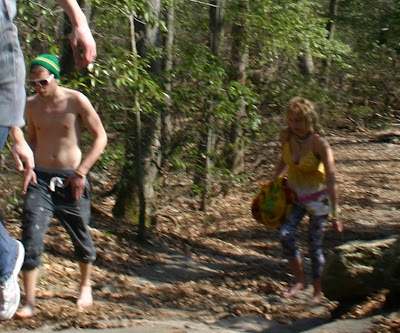 The hat reminds me of Michael Nesmith from the Monkees. He doesn't look like a believer at this point. 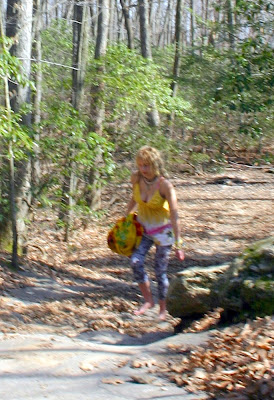 The laggard of the troupe seemed to be struggling with the terrain. I don't think her bare feet were helping her much but she did have a nice towel.

Of course it wouldn't have been a great ride without a little blood. Landed, not once, but twice on my forearm. The same place I banged up two weeks ago. 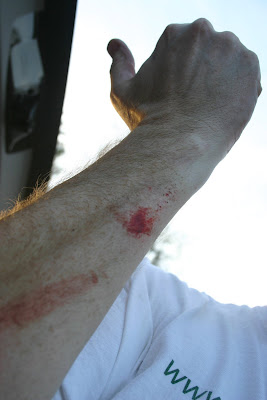 Email ThisBlogThis!Share to TwitterShare to FacebookShare to Pinterest
Labels: Trumbull

That's what you get for making fun of the kids! Bad karma'll always make you crash.

I wonder what they were really up to?