Every very time I am in NYC I head out at lunch to my favorite Indian Restaurant on 46th between 3rd and Lex. I am always on the prowl for bikes, especially fixed gears and single speeds, which I see quite a bit these days. Since, I was alone in my stroll I didn't feel awkward whipping out the camera for every bike I saw. Take for instance this bike I saw between Park and Lex on 48th St. 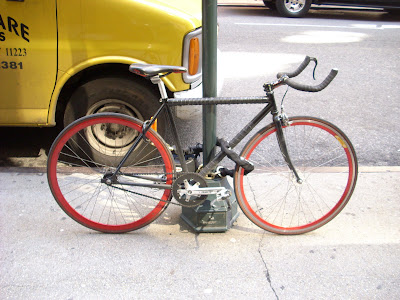 What attracted me to this bike first off was the fact that the bars seemed a bit odd to be bull horns, they appear to be more like steer horns. As if they were flop and chops but before they were chopped, they were bent using a pipe bender. Some sort of rubberized tape to prevent scratching the frame. I always wonder why you would do this? Is it to make the bike androgynous so as to deter theft or just to protect the frame from scratches - which until you take off the tape you will never see. 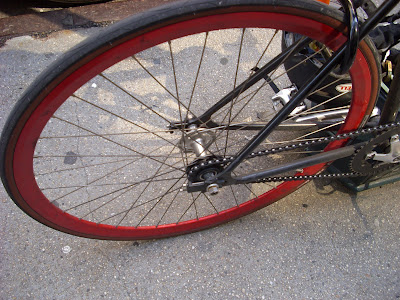